A Pedestrian’s Recent History of Dallas

It was only after I started walking that I learned how to truly see my city.
By Zac Crain | December 4, 2020|12:00 am
View Gallery
View Gallery

A Pedestrian’s Recent History of Dallas

Subscribe
Advertisement
I think I figured out how to take pretty good photos mostly because I didn’t set out to take photos, good or otherwise. The point of what I was doing wasn’t clear at first, but in time it revealed itself. And it wasn’t photographing things but merely looking at them. Trying to see them, really see them, often for the first time. Eventually I began trying to reproduce what I saw. I made mistakes. Early on, I used Instagram filters and frames, not confident in what I had, trying to force a good photo. But it already was. I learned, not easily, that I didn’t have to do much other than keep my eyes open. It really is all about showing up.

That is how this began.

I started walking around downtown Dallas, usually at lunchtime, one day in January 2016. Despite the timing, it wasn’t part of a New Year’s resolution. I honestly don’t remember exactly why I started going for walks, but I do know it wasn’t that. 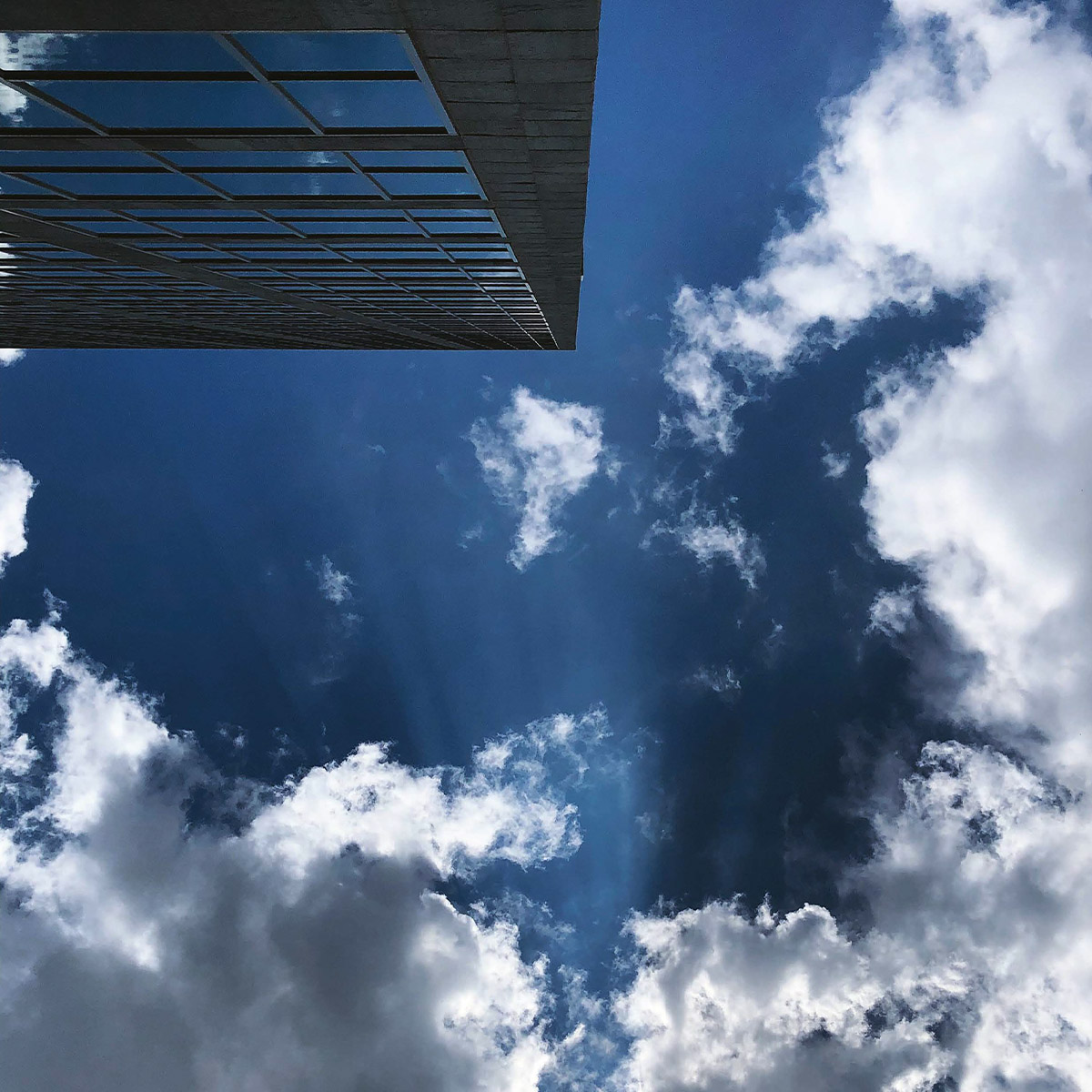 To completely rule out any sort of “fresh start” narrative, I am almost certain that the first one didn’t even happen at the beginning of a week. Just one day, maybe it was a Tuesday, instead of going down the block for my usual dumb lunch, which wasn’t healthy or satisfying or even strictly speaking a real lunch, I took a walk. Like any number of things that I’ve done—like most things that I’ve done, actually—it started on a whim and kept going on its own momentum.

I don’t remember those early walks very well, because they weren’t the point yet. I needed a break from the office, and I decided to walk instead of sit on a bench, staring into the middle distance, lost in nonthought.

So, yes, OK, I was walking, but I wasn’t going anywhere. I was meandering, wandering in lazy concentric circles around the building where I work, at the corner of Ross and St. Paul, retracing steps I’d taken probably 200 times since my job moved downtown—outside, in real life, but essentially on a treadmill. I was probably staring at my phone, because I hadn’t realized there was anything else to see yet, because I thought I had already seen it all, because I’d lived in Dallas since college and I’d worked in and around downtown for most of that time. What else was there to see?

Soon enough, I got bored and curious. I escaped the shadow of my office and began exploring. My phone stayed in my back pocket, only coming out when I wanted to take a photo. Which began happening more and more.

Three years later, I’ve seen every building from every angle. I know why it persistently smells like cookies near City Hall. I’ve watched graffiti appear and seen it be whitewashed out of existence and then seen that be used as another canvas, sometimes by the same artist. I recognize photos on Instagram by a crack in the sidewalk. I can make a topographic map of the central business district from memory.

What I mean is: I know the core of my city intimately, am well familiar with each flaw and idiosyncrasy and unappreciated flourish, the endearing mistakes and overlooked beauty, the parts that make it Dallas and not anywhere else.

“Three years later, I’ve seen every building from every angle. I know why it persistently smells like cookies near City Hall.

As I started walking more and more, I came to understand that most places—all places—were much closer than I thought. Freed from one-way signs and every other restriction one traffic engineer or another had placed on me, I found I could get from anywhere to anywhere else in about 20 minutes. If I wanted to. I didn’t always want to. The more I walked, the less I felt like hurrying. And, again, there wasn’t much need.

Everything, I swear to you, is so much closer than you realize.

But what struck me the most was just how far away everything is when you’re inside a car. Not destinations, OK, but everything else in between.

Here is what I can tell you: when you drive anywhere, a few inches of steel and glass and a few feet of concrete might be all that separates you from a door or window or an alley or a sign or a man or woman or cat, but it might as well be on the other side of a river, be buried underground, be hidden behind a mountain, never have existed to begin with.

You pass so much without seeing even a glimpse—not a single frame, a flash, nothing. In a car, especially if you’re a passenger, you engage when you want to, or when you are forced to, and even if you think you’re vigilant and observant, you’d be stunned at what you don’t notice on a five-minute drive. The difference between what you see in a car and what is actually there would make you feel dumb if it were pointed out to you. Here is what else I can tell you: you don’t know what you’re missing, and you don’t know that you don’t know. 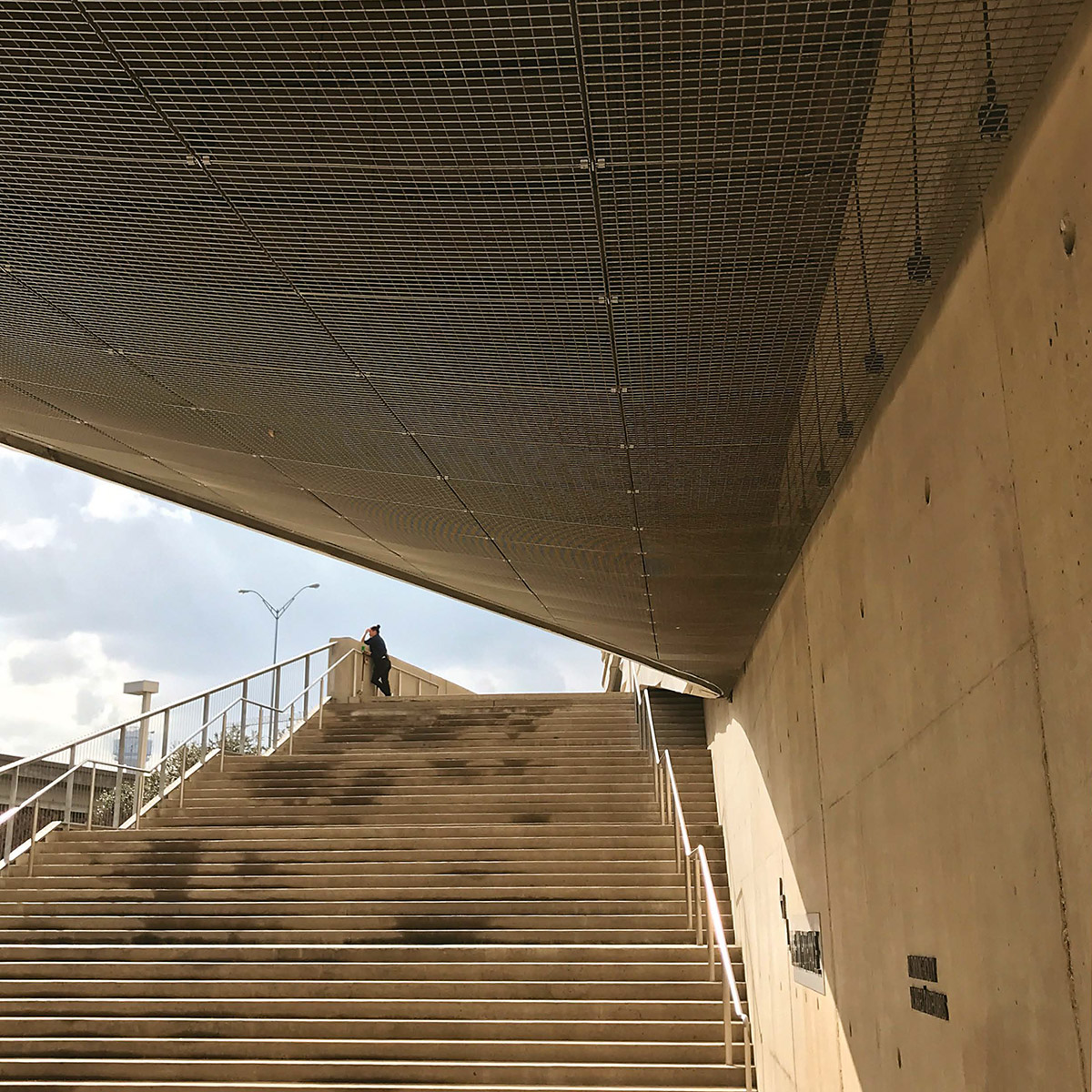 After I had walked every block of downtown Dallas, and all of the alleys and cut-throughs and parking garages and tunnels and sky bridges and everywhere else my feet could take me, I told a friend of mine that I had nothing else left to shoot. He gave me—accidentally, I’m almost positive—perfect advice. “Just go shoot it all again,” he said, and so I did. And what I realized is that I still wasn’t seeing because I still wasn’t looking.

You can’t ever stop looking if you want to see. Nothing is ever the same. Maybe you stumbled onto the ideal composition. OK. But the sun has yet to shine in the exact same way on the exact same thing. I doubt it ever will. If it does, then maybe OK, yes, you can finally stop.

I’m writing this on my phone. I used this phone—three of them, actually—for the rest, so why not the words? I’m walking around, revisiting some of my favorite places, trying to remember why I started doing this. Or how.

I never visited a place the first time solely to take a photo. But there are a few places I go back to, every few weeks or months. Now I’m at one—the triple underpass made famous by JFK. Above it there is a narrow pedestrian bridge that leads to a locked gate. I like to go halfway across and look at the city from there, the Old Red Courthouse dead center, the Bank of America tower looming over its stooped shoulders. I have probably come here the most of any other location, forming a sort of time-lapse image in my mind as the seasons and sun and shadows change.

Now I’m at I.M. Pei’s upside-down-cake City Hall building. Taking a good photo of something designed by a legendary architect is not exactly difficult. And yet. I didn’t take my best photo of it—since revisited many times—for months, long after I’d taken lots of others. I think, again, I was trying to force it.

“Even if you think you’re vigilant and observant, you’d be stunned at what you don’t notice on a five-minute drive.

Then one day I stumbled upon the exact right scene. I don’t remember the first photo I took while walking around downtown Dallas, the first one I took with intention, the first one I meant to be something, even if I wasn’t sure what that something was. But I do remember the first photo I took that I actually thought was good, and it was this one. I was walking past City Hall, on my way back to my office, and I glanced over and there it was: a pair of city workers on break, tiny and almost unnoticed as they sat on the edge of a planter, dwarfed by the audacity of Pei’s design and framed by a cutout in the foreground. A tiny bit of sky peeked in from one corner, reflected by the windows. The rest of it, most of it: angles and shadows everywhere, the colors natural but sort of out of place, belonging to a canyon instead of a municipal building. I didn’t really have to do anything other than lift my camera. The whole process took maybe 30 seconds. It was there, waiting, for me or someone to see.

All the way around the east side of downtown and up to where I’ve taken the image I associate the most with all of this. I could take it every week and still love it and still think I could do it better, that I will do it better, that everything will come together at some point and it will be perfect. 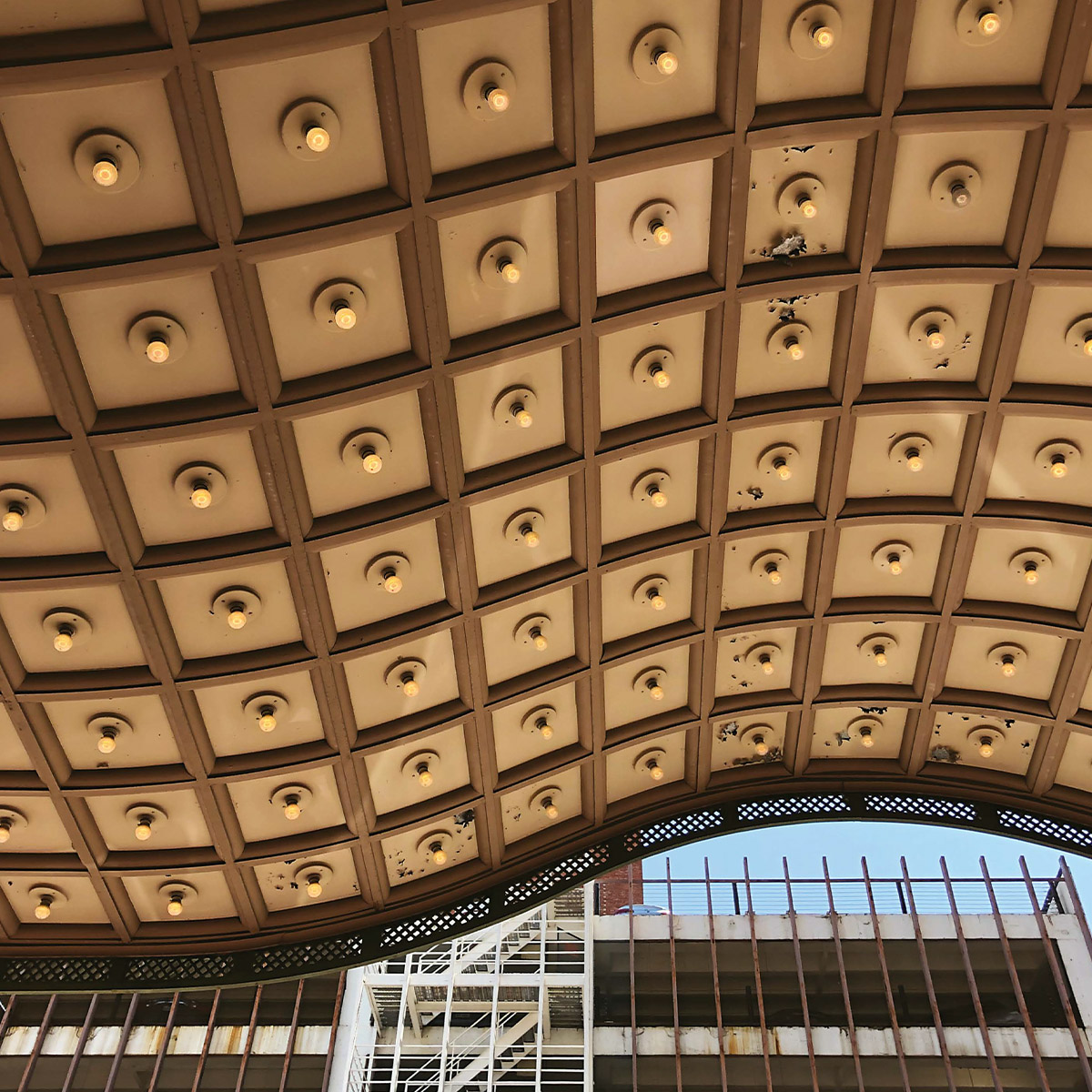 There is a sculpture—I won’t tell you exactly where; go find it—and it is fine enough as a piece of public art. It’s a bit like a mini downtown on the edge of the actual downtown, a cluster of small towers. But there is a trick to this sculpture, and I don’t know if it was intended and I don’t know if I want to know, feeling maybe better that I discovered it. You have to go into it, stand surrounded by it, and look up. Together with the building it stands sentry in front of, the crown of the sculpture creates this beautiful shape and, if the sun is out, on the right day, at the right time, a full spectrum of blues, like a Sherwin-Williams display in the wild.

As good as I’ve gotten at capturing this image, as many times as I’ve taken it, it still doesn’t completely match what I see when I look up.

Nor do I want to live in a communist state where everything is gray and concrete.
By Matt Goodman
Local News