Felicia Corbray’s cancer battle began in November 2017 after she noticed a small flash of light in the periphery of her eye. “I thought I was hallucinating because I was overtired,” she says. “I’d just had twins a couple of months before, so I really didn’t think anything of it.”

When the flashes went on for more than a week, she contacted an eye surgeon who was also a client from Tom Ford, where she works as a sales manager. After dilating her eye, the surgeon discovered a medium-size tumor. Her diagnosis: ocular melanoma, one of the rarest and deadliest forms of cancer—the same one her father died of at age 70.

How often should I get my eyes checked? 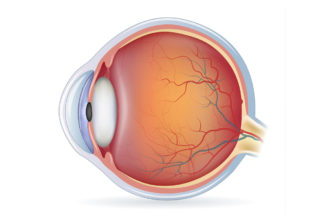 Even people with good vision should get their eyes dilated regularly. The Ocular Melanoma Foundation sets the following exam guidelines:

The American Cancer Society estimates only 3,360 new cases of ocular cancer this year. According to global research foundation AIM at Melanoma, about 50 percent of those diagnosed with the disease will see it spread to other parts of the body. Once the cancer metastasizes, it’s nearly always fatal. Currently there is no cure, although promising evidence shows that early detection, genetic analysis, targeted treatment, and integrative therapy can have a positive impact. “Thankfully I listened to what was happening in my body,” Corbray says.

Family history can be a warning sign. Research indicates that a gene mutation called BAP1 can be passed from generation to generation, making family members more susceptible to the disease. But there’s still a lot to be learned, says AIM vice president Alicia Rowell. “We don’t know what causes ocular melanoma or who will get it.”

Following laser treatments, radiation surgery, and participation in a clinical trial that included chemotherapy, Corbray says she’s now at a monitoring—or what she calls fingers-crossed—stage. Her future holds routine eye exams, MRIs, and CT scans of her chest to watch for recurrence or progression of the disease.

Head to our directories to find an ophthalmologist.

In the meantime, she’s focusing on publicizing this little-known form of cancer. “I try to post things on Facebook and Instagram that will draw attention to the harshness of the disease,” she says. “No one talks about it. There’s no celebrity platform. I feel like it’s my mission to raise awareness.”

Cancer has changed the mother of three’s perspective on more than just the disease. “I don’t take anything for granted anymore,” she says. “My relationship with my husband has blossomed, and I enjoy every minute with my kids.” She has also discovered new ways to care for herself, from Rise Nation VersaClimber workouts (“a game changer”) to Heal, Kelly Noonan Gores’ documentary on Netflix about the mind-body connection (“It changed my life in the first 10 minutes.”).

Corbray’s message to the rest of us is to get a comprehensive dilated eye exam every year. “Like any cancer, the sooner you know, the better,” she says. “But you can live with even a terrible prognosis. Find a doctor you trust. Keep your mind and spirit right. Get to know your body. And whether it’s working out, going to church, or meditating every day, do something that helps you find your inner peace and strength.”

Scenes from the Cattle Baron’s Ball