Charles shreve is used to the response he gets when he tells people what he does for a living. Just saying the word “philatelist” solicits a reaction. “Back in my dating days, women didn’t know whether to slap me or kiss me,” he says. “But even after you tell them you’re a stamp dealer, they’re just as surprised.”

A philatelist is a specialist in philately, one who collects or studies stamps. But as Shreve will tell you, modern collectors aren’t stereotypical nerds putting stamps in albums. “Stamp collecting can be a highly intellectual pursuit,” he says. “My clients are successful, well-educated business professionals.”

Take, for instance, Shreve’s client William H. Gross, owner of the single most valuable collection of U.S. stamps in existence (valued at $42.5 million). Up for auction this past October, the first 106 items sold for more than $10 million—representing “only the tip of the iceberg,” Shreve says.

But it’s not just about the money. For Shreve, it’s also about owning a piece of history. He has seen Revolutionary War letters signed by John Hancock in the late 1700s, Pony Express covers dating back to 1860, and mail that was on the Hindenburg when it crashed in 1937. “There are even singes on the edges,” he says. “How cool is that?”

Shreve’s love of stamps began when he was a child growing up in Detroit, after his grandmother gave him his first collection. He admits he wasn’t a typical kid (“I was wearing wingtips when I was 12”), and it didn’t take him long to discover the moneymaking aspect of his new hobby. “I’d go to shows where I could buy a stamp for $50 on one side of the room and immediately sell it on the other for $100.”

He spent his teens working for a local stamp auctioneer. “They’d have to throw me out at night,” Shreve says. “When I was 15, I told my parents I wanted to pay room and board, so I could come and go as I pleased.” His next move was to New York City to work for Sotheby’s. Then in 1980, Heritage Auctions CEO Steve Ivy brought him to Dallas to open a rare stamp division. “Heritage was already a dominant dealer of rare coins,” Shreve says. “Steve wanted to apply the same modern marketing techniques to the stamp business.”

After a successful 13-year stint, he left to start his own philately business, building it to No. 2 in the United States. After selling to a London firm in 2007, he signed on as the exclusive consultant to his former competitor, Robert A. Siegel Auction Galleries. With more than $30 million in annual sales, it holds the top spot in the country and ranks among the highest-grossing auction companies for stamps worldwide.

Famous past and present stamp aficionados run the gamut from royals and presidents (Queen Elizabeth II, Franklin D. Roosevelt) to rock and roll legends (John Lennon, Freddie Mercury). Well-known local collectors include self-made billionaire Mark Cuban, who told CNBC his side hustle as a kid “taught [him] as much about business as any class,” and Fort Worth philanthropist Amon Carter Jr.

Along with a desire to bring order from disorder, Shreve says the most common denominator among collectors is the thrill of acquisition. “Once they own it, it’s in their collection,” he says. “The real drive is about what’s next.”

The same goes for Shreve. He’s always excited anticipating the next collection. “It’s answering the call that someone is ready to sell,” Shreve says. “They’ve taken their collection as far as they want to, and now it’s about getting the most money for it.”

The dollar amounts can be staggering. The uber-rare 1-cent Benjamin Franklin Z Grill—the single stamp Bill Gross needed to complete his collection of every U.S. stamp ever issued—cost the bond trading mogul $3 million. And in 2014, the British Guiana 1-cent Magenta (which many philatelists call the world’s most famous rare stamp) fetched a whopping $9.5 million at auction, the fourth time it had broken the world record for a single-stamp bid.

“You can collect stamps just for fun,” Shreve says. “But if you want to make money, you’ve got to buy and sell the good stuff.” He should know, having racked up career sales in excess of $1 billion. His best advice? Stick with what you know. “You can’t be successful in any business—especially the hobby business—if you’re not passionate about the product.”

The Most Valuable Substance on Earth

What makes a stamp worth hundreds of thousands—even millions—of dollars?

In the world of philately, demand and desirability give a stamp its “value and sexiness,” says Shreve. The top three determinants: rarity, exceptional quality, and a rich history. Here are a few of the stamps in Shreve’s recent record-breaking auction of Bill Gross’ collection. 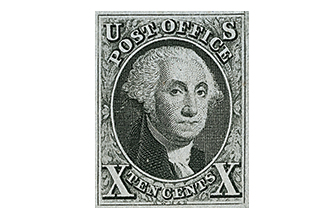 The first U.S. stamp issued by the government, it was replaced four years later with a new batch in 1851. With very few of the originals in public hands, the unused block is the largest known multiple still in existence. It is believed to have survived because it had been forgotten and rediscovered in a family Bible more than 60 years later. 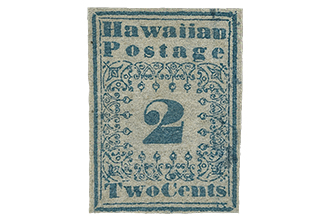 The only known sample in unused condition, this stamp was issued in 1851 when Hawaii was a sovereign nation. After it soared to a world-record price of $41,000 in 1963, Life magazine proclaimed it to be “pound for pound, the most valuable substance on earth.” (Weighing in at two-thousandths of an ounce, that calculates to $1,195,833,395.61 per pound.) Adding an extra dose of sex appeal: the Blue Hawaiian Missionary earned Hollywood acclaim as the MacGuffin in the Cary Grant and Audrey Hepburn murder-mystery film Charade. 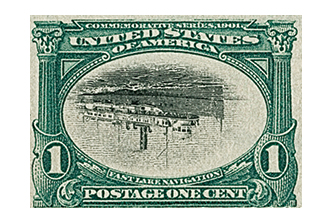 Stamp collectors love a misprint—especially an upside-down one. Hidden in a bank vault, this huge block of stamps resurfaced at a philately exhibition in Philadelphia in 1976. It is believed to be the largest multiple of its size of any postage invert error to remain intact.