After nearly a year of renovations, Fort Worth’s Amon Carter Museum of American Art premiered its revamped gallery spaces in September. The remodel follows a 2001 expansion—designed by the founding architect, the late Philip Johnson—which added more than 50,000 square feet to the museum’s original 1961 building. This time around, changes include a new curatorial layout and updated interior. “The museum is poised to inspire more people more deeply in the years ahead,” says Brett Abbott, director of collections and exhibitions.

The galleries on each of the museum’s two stories feature new open floor plans and thematic layouts, facilitating easy navigation through the Carter’s collections and exhibitions. “No matter where a visitor ends up in the gallery, or however they enter, the themes are what give them a sense of where they are in the greater American art historical narrative,” says Isabel Hebert, strategic communications and marketing manager. In addition to the Western theme of the Legacy Gallery—which is home to Amon Carter’s original collection of sculptures and paintings by Frederic Remington and Charles M. Russell—visitors can stroll through rooms centered on American landscapes, modern America, and 19th-century wealth.

Several new temporary exhibitions accompany the museum’s reopening. “Set in Motion: Camille Utterback and Art That Moves” showcases pieces by female artists examining movement. The exhibition covers nearly a century and multiple media, including lithography, photography, and charcoal drawing. The highlight is an interactive Utterback piece in which a camera uses algorithms designed by the artist to convert visitors’ movements into an animated digital painting.

The adjacent gallery houses “Gordon Parks: The New Tide, Early Work 1940–1950,” a collection of the iconic African American photographer organized by the National Gallery of Art. From fashion photos to shots capturing daily life during the Great Depression, Parks’ images touch on themes such as segregation, tenement living, and the growth of mass media. “We have one of the largest and best collections of American photography in the world that spans the history of the medium,” Hebert says, “so Gordon Parks was a perfect fit for us.”

Museum visitors can peruse the Amon Carter’s permanent collection, temporary exhibitions, and newly updated gallery spaces for free every Tuesday through Sunday. “Set in Motion” is open to the public until December 8, while Parks’ photography will be on display until December 29.

A couple more to explore on your trip to Fort Worth. 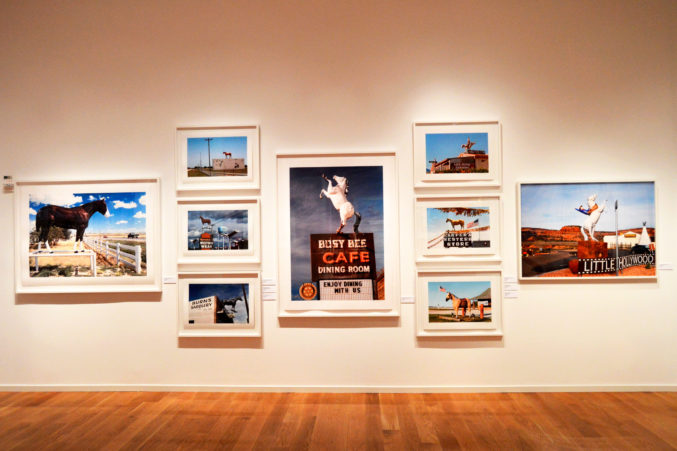 Laura Wilson: Looking West
National Cowgirl Museum and Hall of Fame
Through Mar. 15, 2020
Wilson, a recent inductee into the National Cowgirl Hall of Fame, has had a wide-ranging career, from her early work under fashion and portrait photographer Richard Avedon to her recent interest in documenting mountain lion hunters in Arizona. This collection of the Dallas photographer’s images showcases the ruggedness of the American West.

Focus: Martine Gutierrez
Modern Art Museum of Fort Worth
Nov. 8–Jan. 12, 2020
Gutierrez presents her most ambitious project to date: a 146-page publication titled Indigenous Woman. Reminiscent of Andy Warhol’s Interview magazine, it contains fictional advertising and high-fashion spreads for which the artist is the model, designer, and photographer. Gutierrez says: “Indigenous Woman marries the traditional to the contemporary, the native to the postcolonial, and the marginalized to the mainstream… revealing cultural inequities along the way.”

Get a front row seat to the best shows, arts, and things to do across North Texas. Never miss a beat.
Amon Carter Museum Fort Worth

Sinkholes hate pedestrians, too.
By  Matt Goodman
Fort Worth

The Houston Street shop has been creating custom-made hats for more than a century.
By  Staci Parks
Openings/Closings

The warm, delivery cookies are making their way to Cowtown.
By  Catherine Downes
D Magazine Directories