When Fine China opened in July, the crown jewel of the remodeled Statler hotel had finally arrived. The kitchen was under the direction of Angela Hernandez, a bright young chef who most recently held the executive chef position at Top Knot and whose career, which has wed classical French technique with modern strokes, set her up to do this modern American Chinese high-wire act. As a young chef de partie in New York, she worked at L’Atelier de Joël Robuchon, at Michelin-starred Corton, and with Neil Ferguson, who opened Gordon Ramsay’s namesake in New York. As she prepared to open Fine China, she trained with chefs in Las Vegas—the dim sum master at the MGM Grand and the owner of the now-closed Grand Wok, where she focused on wok cooking and char siu barbecue.

Of The Statler’s six bars and restaurants—which include a speak-easy, a diner, and a rooftop bar—Fine China was to be the revitalized hotel’s fine-dining gem. It was also the one with the most riding on it, not least because its debut was plagued with delays. And when it finally did open, seven months late, I was lukewarm, though there were glimmers that made it impossible to write it off.

If someone were to tell me that the team had spent the entire seven months fine-tuning the Cantonese-style roast duck, I would be inclined to believe it. For $75, you can summon a whole duck (a half is $38), which arrives sliced at your table with its head on, lacquered and impressive-looking. The night I did, the skin was crisp with a deep, buttery richness when I pinched it between my fingers. Under its luxurious fat cap, the meat was tender and full of gamy flavor, with Chinese five-spice as a distant call. It was enhanced with a strawberry hoisin barbecue sauce, julienned cucumbers, green onions, a pile of sea salt, and strands of Malabar spinach and shiso leaf. Tuck it all into one of the split mantou buns, and the soft, white blimps carry you through the richness of meat, the coolness of cucumber, and the slippery, mucilaginous spinach, which plays nicely against the vibrant, herbaceous shiso leaf. The experience is imperative. 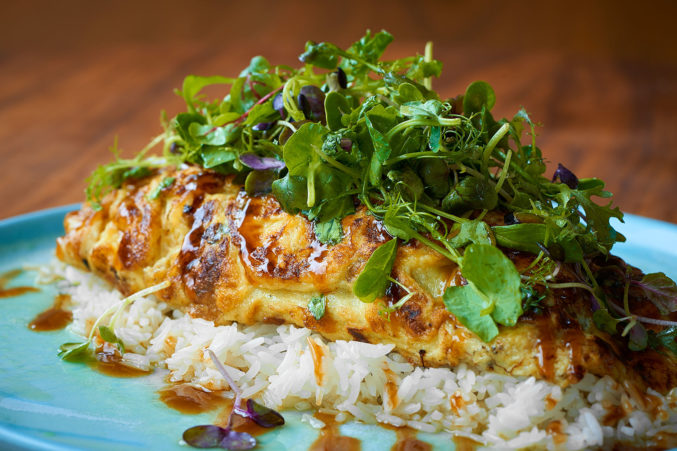 But if they are out, I also love the Chinese-style sweetened omelet stuffed with crab. It arrives rolled around a bundle of pea shoots, like an eiderdown that has been strafed with oyster sauce, topped with microgreens, and flopped over a bed of fragrant jasmine rice, in a sauce that looks weepy and pale like the cloudy depths of egg drop soup. Slightly sweet bits of omelet have met the pan and browned. They are my favorite part of this Frenchified version of a Chinese wok-fried classic often made with cooking wine. Given Hernandez’s background, none of this is surprising.

The dining room itself looks as though someone assembled it from architectural scraps. I never quite understood the appeal of a dark cave with acute angles, accents of dark wood, and floral wallpaper. Dramatic spotlighting means you can spend the whole evening in shadow, and a long strip of seating to which I was directed for each of my visits feels like a hallway. The view of a private room resplendent with ornamental teacups seems to underscore a point: you are not of the emperor’s chosen ones.

Kyle Hilla’s wine list offers whites like a Gewürztraminer and Italian Vietti Roero Arneis that accent the food. There is one rice beer. You can bop around with cocktails that include visuals of the opaque and frosty sort. The most dramatic and awkward to drink is the Tigers Eye, whose enormous block of ice takes up most of the square cedar sake box in which it’s served. But I would choose tea. Cold-brewed chamomile over ice tastes not of stewed blossoms, but the bright essence of the flower. Or coconut oolong, with a smoky back note on the finish. These two-day cold-infused concoctions bridge the gap between cocktails and fine hot tea. Servers will perform a shaky version of the Chinese tea ceremony that would benefit from a bit more elaboration. The pu-erh they crumble from the brick is vintage (a funky one, with an aroma like hay meets XO sauce), though no one thought to explain what vintage meant. 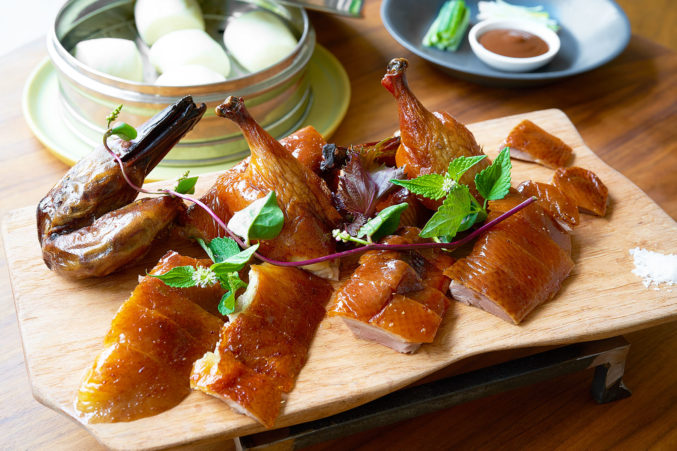 Her Cantonese roast duck requires three days’ preparation before it arrives crispy and lacquered from the wood-fire oven.
Kevin Marple

The dim sum is uneven. Xiao long bao (soup dumplings) were doughy, their flavor not nearly as nuanced or subtle as some I’ve had. Shumai preened with a juicy pork and shrimp filling, but were not memorable, save as vehicles for fermented chile paste. On other visits, spring rolls came piping hot, with shattering, paper-thin sheaths and mushroom XO sauce to underscore the filling. Fried prawns were outstanding. A layer of warm spices (Old Bay cut with mala spice), delicately encrusted, lingered on the lips; a squeeze of lime on them for a blend of salty, sweet, tangy was singularly satisfying. Little touches were worth noting: Sama Sama sauce’s singing notes of coriander on finely lacquered chicken wings. Or pork ribs’ syrupy fish caramel, with a flavor like butter caramel shot through delicately with star anise. If only all the dim sum were as good.

Under Hernandez, the kitchen has a marvelous way with fermented black bean paste—mysterious, forbidding stuff, like black gold. It rolls through a bowl of butter black noodles, punched up with lemon zest and deliciously burnt garlic crumbles. It also rounds out mapo tofu’s sweet and tangy sauce. Arriving in a ceramic pot with an attractive crackled lid, it was far darker than I’m used to. What I first thought were stewed prunes were morsels of eggplant, tender to the point of collapse and adding their own sweetness. The sauce, bolstered with black vinegar and Shaoxing, had umami notes that helped rescue it from too sweet. A tingling ma-la sensation, a sophisticated warming that functions like another layer of flavor, remained from toasted, ground Szechuan peppercorns. 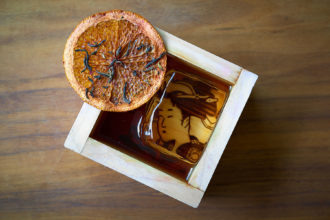 Everywhere were hints of the modern. Wide wok-fried noodles came with a mushroom XO sauce and what seemed like a boozy undercurrent of sake that was hard to pin down, melding with the musty funk of truffle shavings over the top. Snow-white cod’s delicately flaking flesh rested in a pool of almost clear liquid, with basil flowers for contrast and aromatic jasmine rice. It’s a simple Cantonese dish, though here the sauce is brown butter and ponzu. And soy chicken—a half-chicken, precisely cut, with crispy skin and juicy breast meat—came with a pale garnish of onion chives and fresh ginger, and a fragrant ginger-soy sauce on the bottom. (In a 20-minute chill after poaching and before frying, the bird’s pores slowly close around a version of that poaching liquid.)

But not everything with modernized touches worked. Spiralized kohlrabi salad with watery beets and cashews was boring and forgettable. Dandan noodles were prettier than they were tasty. And Wagyu beef tartare with diced green mango came with a beef tendon halo that dissolved unpleasantly into oil in the mouth.

Hernandez’s talk of following a modern Chinese chef movement on Instagram sent me ogling dishes served in glistening towers of glass above the dense cityscapes of Hong Kong and Shanghai. But Fine China is not a Michelin-starred dim sum eatery at the top of The Ritz-Carlton. Though Hernandez is talented and her work with flavors noteworthy, I am not sure yet what Fine China’s legacy will be. Given her lofty aim, she still has work to do.