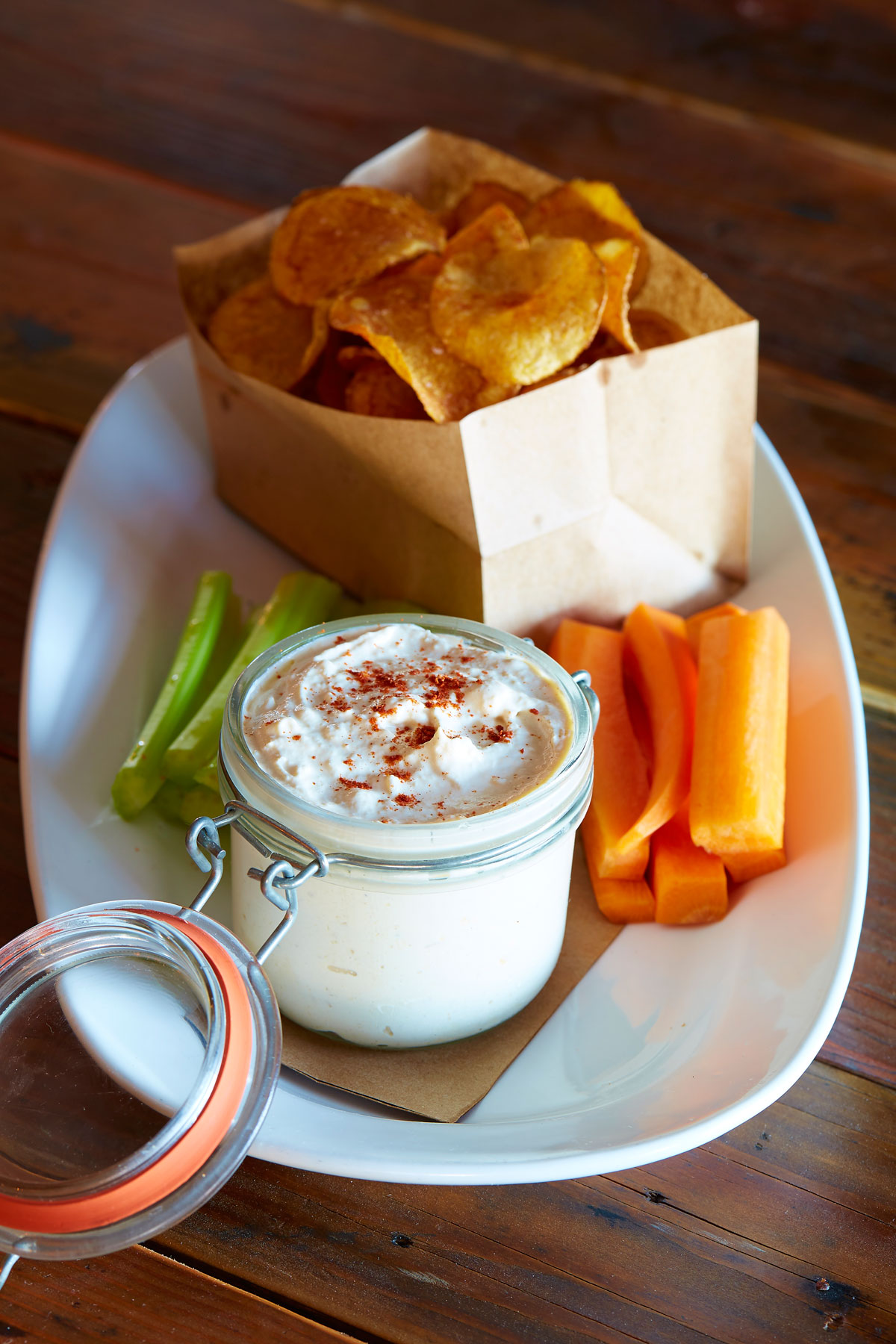 Onion dip
We had barely arrived, and the host was shimmying scarves with us. “It’s a scarf day. You’ve got to join the party!” he said, as he and my friend fluttered their bohemian prints like cheerleaders’ pompoms in a spontaneous flourish. Such was our welcome to Sunday brunch. I was taken aback, then charmed. Above us, a ceiling of floorboards gently insinuated the topsy-turvy. Hold onto your hats, I thought. This will be fun.

The space at Henry’s Majestic, which opened in October, is ample yet cozy. Dark walls and an ornate, gilt-framed mirror give the place a slight steampunk look. Past the entryway, the ceiling becomes tin tiles, painted black. Light spills from a patio where a dog basks near its owners. At night, a pool table sits snug under marigold lights, and heat radiates from a flickering gas fire. On one visit, there’s funky music full of horns; on another, mellow Texas blues.

Chef Roe DiLeo gets to play in a bigger kitchen at Henry’s than she had at one of her last posts, The Libertine Bar, and the result is a more expansive menu that has personality. She does a wonderful job capturing the spirit of brunch, which is the spirit of the weekend, the spirit of fun. You don’t talk business, nor is it a date. You go with people you love, and you let your hair down.

Chef Roe DiLeo’s brunch menu has a come-one-come-all quality, a wide-armed magnanimity that nudges the palate with small flights of festivity.

Her brunch menu has a come-one-come-all quality, a wide-armed magnanimity that nudges the palate with small flights of festivity. Take the opening bread section. Monkey bread. Biscuits. Streusel cake. They’re like reverse party favors, proffered at the start, designed to come out fresh within four minutes. Pick your adventure. Mine would always begin with the savory monkey bread, laced with pesto and chevre. Its ethereal lightness and the way it carries the flavors like gossamer are an indication that things will be playfully done, but with skill. Mescal and a dab of Sriracha made a fat oyster on the half-shell (available only on Sundays) carry heat and smoke over its saline freshness. For $5, it’s a slightly silly splurge. But it’s Sunday, it’s brunch, and the mood waxes whimsical. Not least because the cocktails by Alex Fletcher, formerly of Victor Tangos and The People’s Last Stand, are friendly and full of character. The Garden Bloody Mary, unexpectedly zesty, warmed the palate with Fresno peppers and black pepper that swirled at the bottom. Honey-kissed milk punch had plenty of bourbon; cinnamon and almond milk made it so light and so quaffable that I was reminded of the tipsy Salvation Army crusader in Guys and Dolls who warbles, “This would be a wonderful way to get children to drink milk!” The world is rosy. You’ll be pardoned a gentle giddiness. 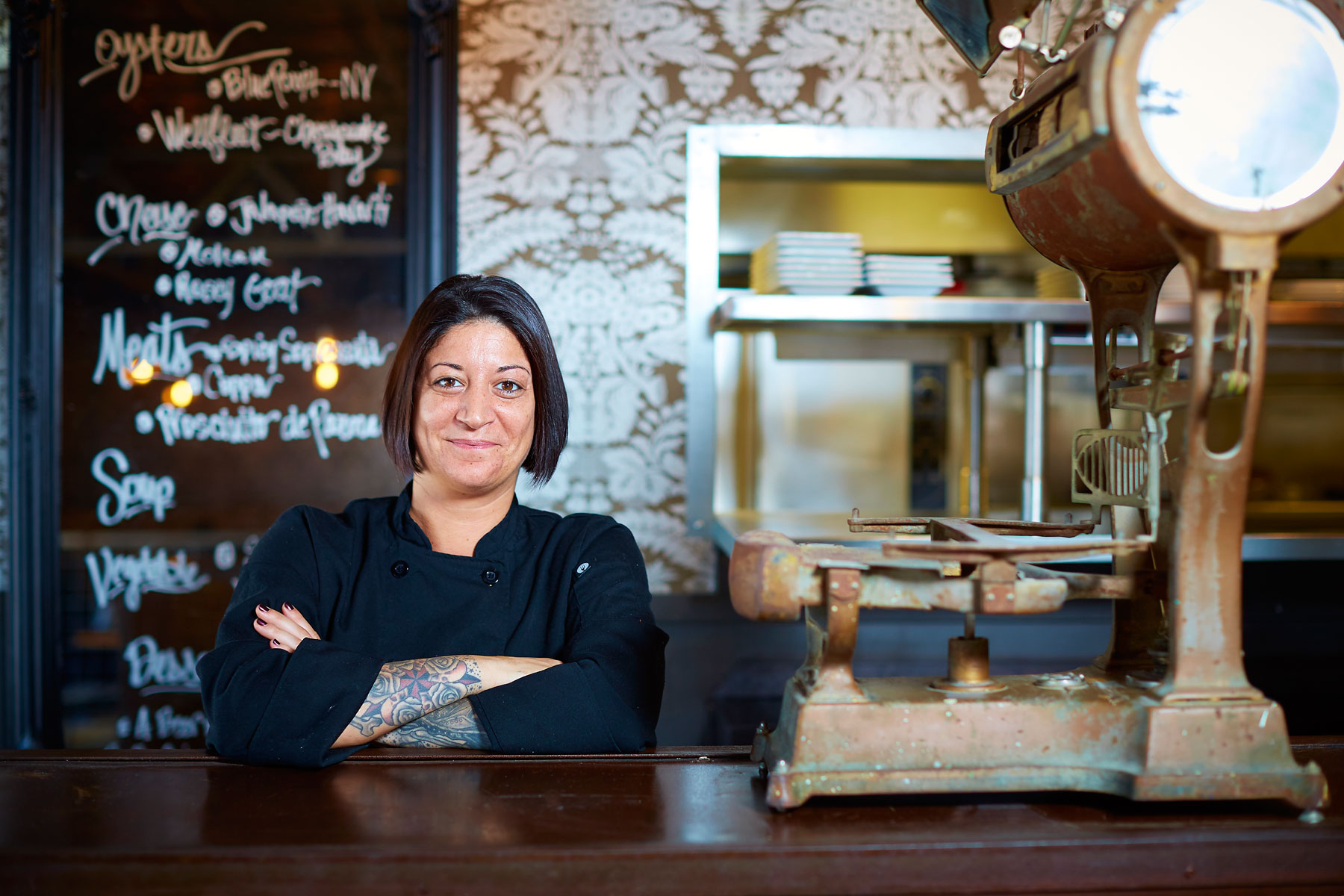 DiLeo knows how to make ostensibly ordinary things memorable. French toast made with baguette was chewy and tangy, with a cardamom whipped cream and tart cherry compote that made us perk up and take notice. Pork belly, nestled in creamy grits, delivered the magical pork-belly trio of textures: a chewy, meaty base; melting ribbon of fat; and bark so crisp it shattered like a crème brûlée. An anise rub sent fennel notes singing over the unctuousness. Huckleberry sauce contributed mostly color, but the whole dish made me want to hug the chef. On the other hand, house-smoked salmon on blinis could have reached for Nordic simplicity to showcase its flavor but was a mess of mayonnaise and capers—fatal over-exuberance.

“What’s that?” I asked as something caught my eye from across the room—something confettied in purple cabbage, red fresco chiles, and cilantro, as though strewn with edible flowers. The attraction, it turned out, was DiLeo’s Latin riff on eggs Benedict, with pulled al pastor pork, deeply spiced, over scallion-studded corn cakes, fluffier-than-usual arepas, and a silken zing of lime crema. It was a delicious twist, as playful as the pigs in a blanket that peeked out not from thick, bready eiderdowns but from flaky spirals of burnished croissant dough, cheeky and slightly irreverent. The sausage inside, though, was reminiscent of a typical breakfast link, sweet and ordinary. “Why not rabbit?” my friend asked. “Something gamier.”

Dinner presents the challenge of dodging bar-food clichés—which DiLeo does, though unevenly. For adventurousness, there are oysters from various provenances. On one night, local charcuterie from Meat Parlour included spicy coppa and delicately seasoned chicken pâté with pistachios. Arancini, glorious crispy rice balls, got a lick of sophistication from velvety vermouth sauce, and the house Old Fashioned sent orange oils and chile dancing on our tongues. 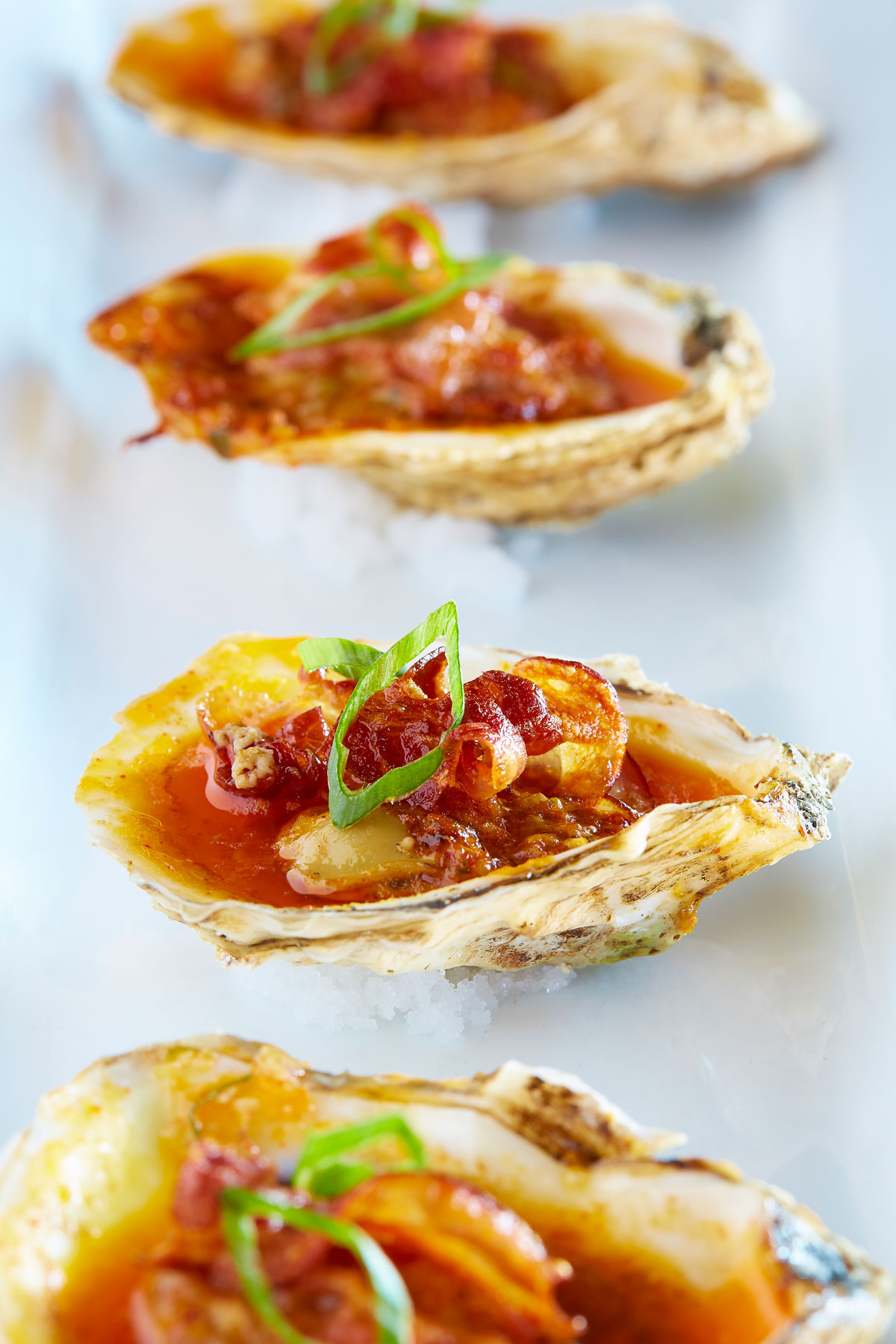 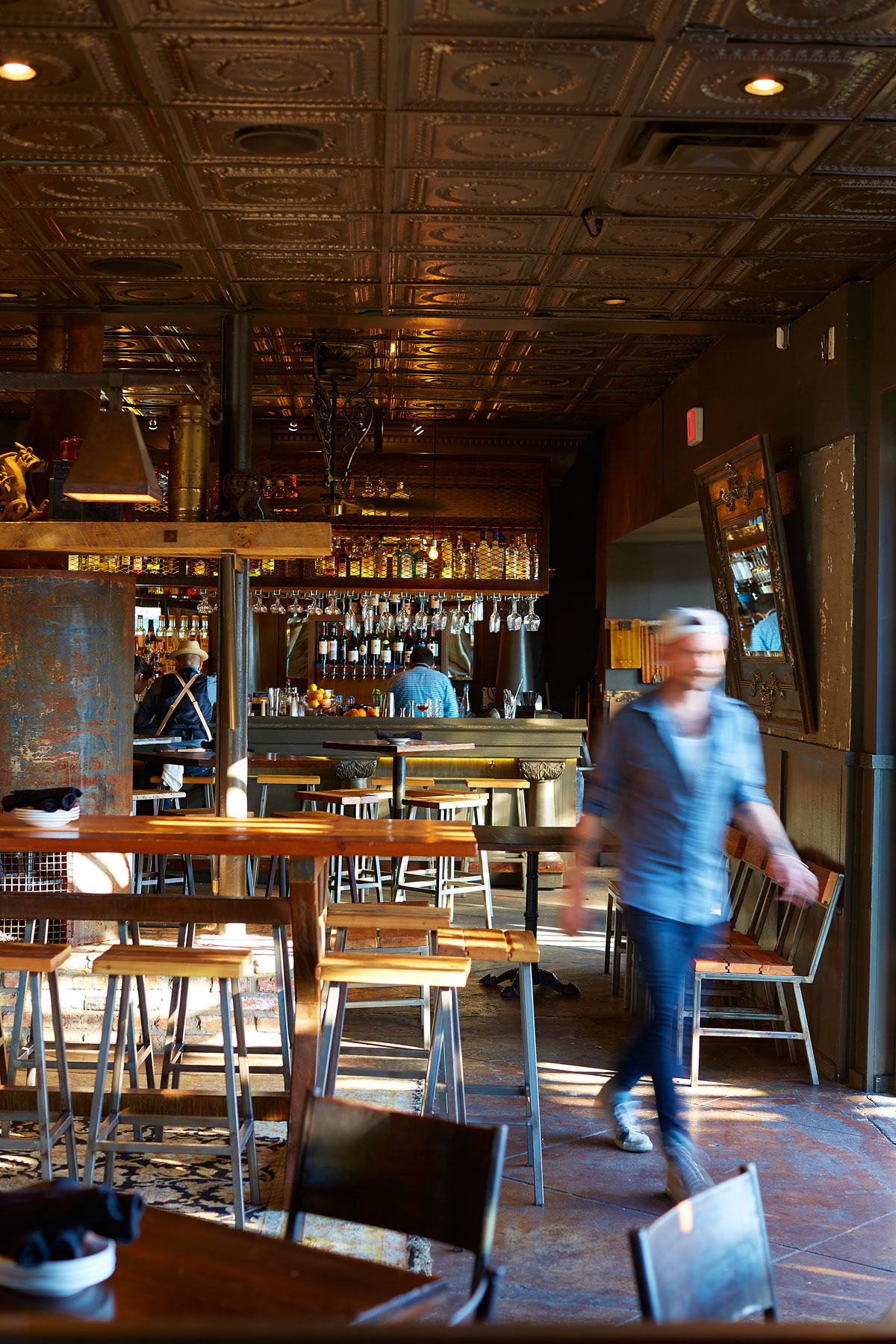 As at brunch, the most memorable dishes made simplicity a virtue. Humble onion dip—blond like pale caramel and soft as a sweet, roasted onion cloud—won our hearts. I hoped no one would notice as I shunned the crudités and licked it off a spoon. The burger was pure decadence, oozing marrow butter and beef juices. The pho’s broth had no soaring notes of star anise, but the mellower stock was soothing and still rounded, with delicious morsels of brisket and flank steak.

There were letdowns, too. The pork belly, so magical at brunch over grits, moonlighted in a salad as mammoth, unsubtle croutons. Perfect, plush meatballs, whose texture and aroma filled the whole mouth, were smothered in a maple-bourbon sauce as sweet and gelatinous as pecan pie filling gone wrong. The flavor of a rib-eye sandwich slipped away, as though adrift on its watery jus, and a plate of cream-laden mussels made empty promises of fennel pollen and dill. (Certain cocktails made empty promises, too.)

Perhaps the most personal: the drippings potatoes I was keen to have my friends try were pale specimens, not the nubs of golden goodness I’ve known, browned from basking in a roasting chicken’s juices. The bird itself was moist with crispy skin, courtesy of a rotisserie DiLeo has installed. She also uses it to great effect on quail and porchetta. But I could have wept for the drippings potatoes.

What was sweet from beginning to end was the service. The staff is genuine, without an ounce of pretension. Some could study the menu a bit longer, but they’re invested in ways that are touching. One waitress sought her colleague for a hand-delivered latte when we found the Vietnamese coffee too weak.

As we attacked an icebox pie, we wished they’d recommended hard hats. We must have looked comical, chiseling with our spoons. But the “beer and a shot,” a stout-infused chocolate mousse accompanied by whiskey whipped cream, made us melt. The beer’s hoppy aroma blossomed, releasing tender floral notes that mingled with the chocolate, mysterious and secret-garden-like. More than an indulgence, it was an excursion—and like the best at Henry’s, both fun and finessed, cheeky and so satisfying. I shouldn’t order things twice. But when dry cake left a friend desolate, I took action.