On a moonless night in December 1994, the landlord at 4625 Ridgelawn Drive led a prospective tenant, Craig Miller, through the back gate, toward a kidney-shaped pool.

Miller was a gangly, 29-year-old novice broadcaster who had just won the gig of a lifetime as a host in the dead-air afternoon on The Ticket, a fledgling all-sports radio station.

As they made their way around the backyard, the landlord effortlessly navigated a narrow, 18-inch gap between the house and the pool. Miller followed.

“All of a sudden, I put my right foot out, and I don’t feel anything,” Miller says. “And I go straight into the pool.”

He fell like an idiot in a silent film gag, but his only audience was a bewildered, if amused, middle-aged landlord.

“So what is this landlord thinking?” Miller says. “What kind of moron am I showing the house to? The guy walks straight into the pool fully clothed.”

Despite the sight of the drenched and freezing young man with the sly, wise-ass grin, the landlord rented the house to the radio host. Ted Gangi, a producer at the station; Miller’s old college roommate Tom Walton; and fellow Ticket host Greg Williams all moved into the house as well. When Walton headed to Houston five months into the lease, Gordon Keith, a 23-year-old drifter who scored a job at the station by simply hanging around, replaced him. He slept on a sheetless mattress and kept his clothes in a grocery sack. The front door was rarely locked. Thanks to a station sponsor, there was an endless supply of beer. And Miller was far from the last idiot to fall into the pool. In the coming months, beer cans, roof jumpers, women, bicycles, and even a football-player-size television broadcaster who couldn’t swim made their way in. 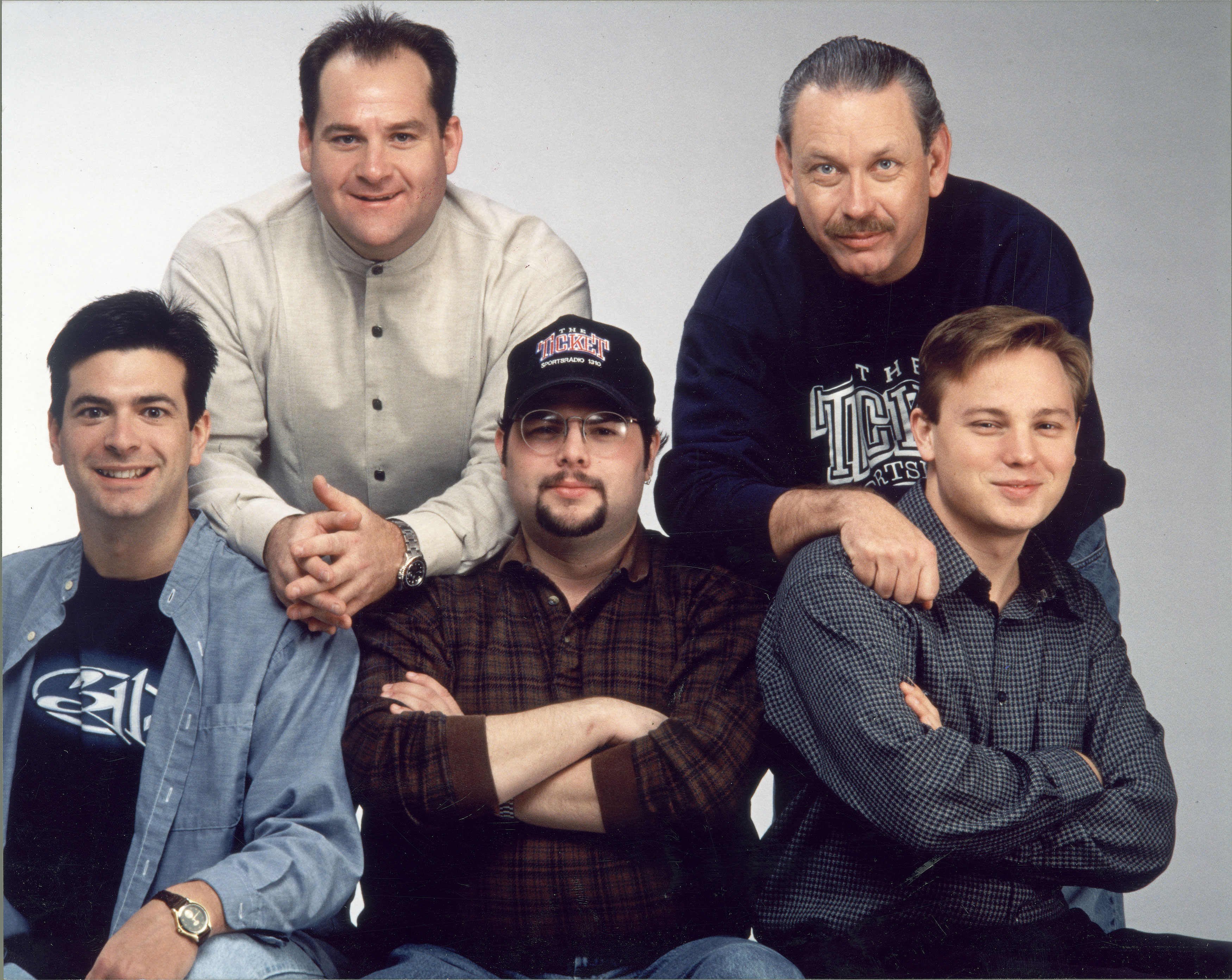 GOOD SPORTS: (clockwise from top left) Greg Williams, Mike Rhyner, Mark Followill, Kevin “Expo” Fox, and Jeff Catlin
Miller, Keith, and Williams only lived in the house for a year, but it was a vital year in the history of the station, which celebrates its 20th anniversary this month. It was during this year that The Ticket, originally modeled after all-sports stations that dished straight-laced sports talk peppered with listener phone calls, began to mold a unique, idiosyncratic style pioneered by the two hosts who lived at the house and their partners on the air-—station co-founder Mike Rhyner and Miller’s co-host and former University of North Texas college roommate, George Dunham. It was the year that Keith found his place as the station’s resident comedic genius. And the house was where they would develop the rapport that would make the stories of off-air life the station’s on-air product: likeable, good-natured, endlessly funny hosts peddling wacky anecdotes to listeners who gobbled them up. It was a broadcasting style that would reinvent the very sports-radio medium they were trying to break into.

In the two decades since that pivotal year, The Ticket has become a cultural force, a cross between Oprah for men and a radio piazza. Every day, listeners can turn the radio to 1310 AM (and, since late last year, 96.7 FM) and be swept up in a close circle of friends with whom they share a common history and a common language. Many in Dallas use Ticket lingo, often without knowing it, even without ever listening to the station. “Spare,” “wheels-off,” “P1,” and “beaten down” were all popularized by the station. The daily lives of Dallas men (and more women than you might expect) are tethered to the warm, comforting blabber of The Ticket.

And it can all be traced back to the house on Ridgelawn Drive.

“It was wild, a continuous party,” Keith says. Michael Moroney, the station’s first head of promotions, calls it a “radio Haight-Ashbury.” On air, it was simply referred to as The Ticket Compound.

Rhyner found Williams and Miller in the auxiliary press box at the Texas Rangers’ old Arlington Stadium. The two younger men were low-level sportscasters and producers at other stations in town. Rhyner was a veteran of the popular Morning Zoo with LaBella & Rody on KZEW in the 1980s. During the summers before The Ticket’s launch, the trio would blow their nights watching games, chatting baseball, busting balls, and showing off for everyone around them in the press box.

“We would talk about anything,” Williams says. “We all had strong opinions.”

It all sounded like the kind of banter Rhyner wanted for Dallas’ first 24-hour, all-sports-talk radio station. But even after the trio of Ticket founders—Rhyner, ad man Geoff Dunbar, and investment banker Spence Kendrick—identified an available signal, assembled a crew, and planned the launch, there was still plenty of skepticism. The Ticket didn’t have much money. Nor did it have the rights to broadcast any local professional games. Kendrick’s Cardinal Communications had purchased a desperately low-wattage AM signal from the media arm of the Mormon church for $3 million. The Monday before the Cowboys won their second straight Super Bowl, Skip Bayless (now the host of ESPN’s First Take) said the very first words on KTCK 1310 AM. The phones instantly lit up with callers eager to talk about their team. 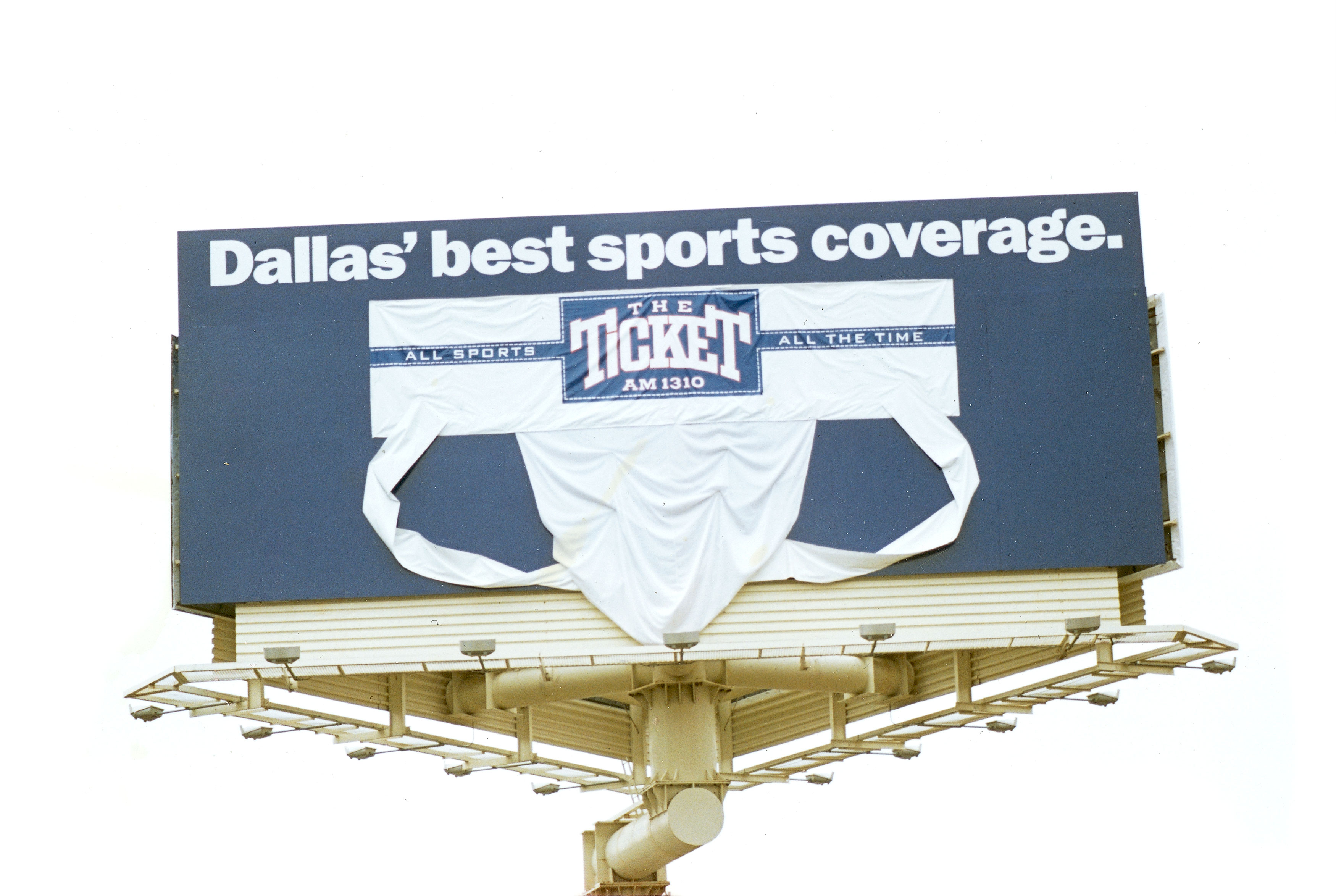 A billboard from the early days
But there was something a little off about The Ticket. Less than 24 hours after the station went on the air, the hosts flew to Atlanta to broadcast from Super Bowl week. The Ticket was sharing a studio in Dallas with KZPS. They didn’t have good equipment or much expertise, and Atlanta was a mess—toppling microphones, lost signals, and dead air. But during that first week, something else was happening. Each night the young hosts would go out together. Thursday, January 27, just days before the Super Bowl, was both Williams and Gangi’s birthday. They went to The Cheetah lounge, a famous Atlanta strip club. When they got in a cab at the end of the night, the crew was plastered, and Dunham, a bearish man with a doughboy face, passed loud and tremendous gas.

“George had farted so big that it resonated and just rattled off that vinyl,” Williams remembers. “And I said, ‘Man, you have to be pretty sorry to fart in a man’s cab.’ ”

The antics, the flatulence, the jokes, the story about the stripper who wrote Williams’ initials on her breasts in bubbly green body paint—it all became fodder for conversation on the air. And after Atlanta, it continued. Early listeners found something more than sports on The Ticket. They had stumbled upon a fledgling community of off-the-wall personalities whose stories, bits, and observations on everything from football to the trivial frustrations of everyday life struck a chord. At first, local radio legend Ira Lipson, who was working as a consultant with very wide latitude for the station, pushed back against the silliness, trying to promote a more caller-driven format. But when Kendrick’s Cardinal Communications sold the station to SFX Broadcasting in early 1995, the station’s new program director, Mike Thompson, a loud and demonstrative Philadelphia native, spotted what he now calls “lightning in a bottle” in his midday hosts.

By the end of 1995, straight sports talker Bayless—who had manned the morning-drive slot since the station’s launch—was gone. Dunham and Miller were moved to mornings. Within a year, Rhyner and Williams would be moved to the afternoon-drive spot.

“The problem with most sports stations is they set themselves up to be an ancillary station, like going for traffic,” Thompson says. “Especially at 1310 on the dial, there’s no way you can exist like that. You had to get the average fan away from the other male stations. And to get full-time listening, you push them through the story, the never-ending story of ‘us,’ where the personalities are just as important as the topic.”