“All we did was just do radio, go to The Compound, and drink,” Keith says. “And drink until we went out at night, and then drink at bars. And there were women who would come through The Compound, and there were swimming parties and ridiculous challenges. It was just a bunch of jackassery. And The Ticket in those early days just sounded like state-sponsored jackassery. It was this suspended adulthood, this eternal adolescence.” 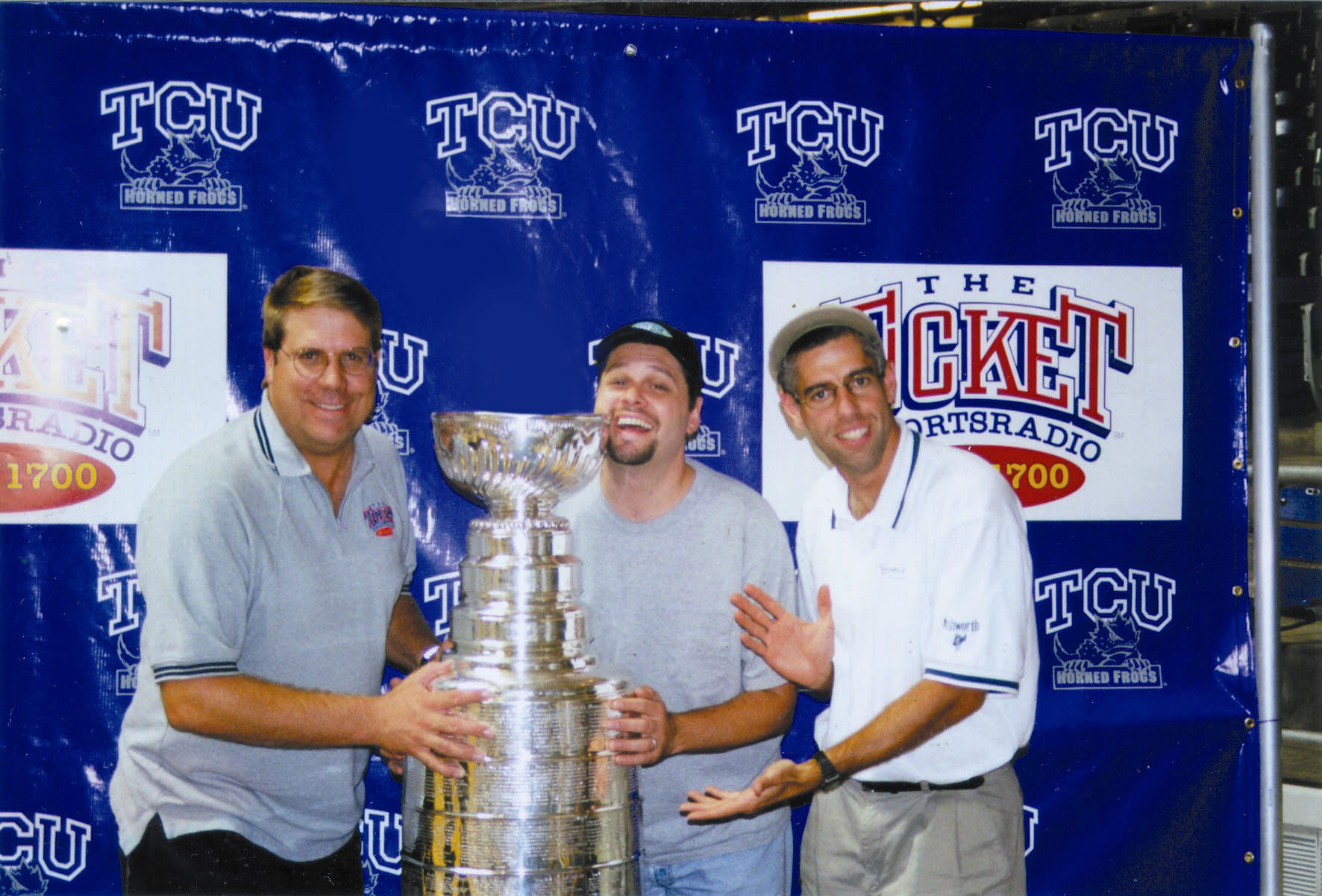 CUP CHECK: The Musers (from left) George Dunham, Gordon Keith, and Craig Miller with the Stanley Cup in 1999
Program director Mike Thompson had bet the future of the station on this ragtag collection of hosts who had slipped through the cracks at other stations and honed their seamless, entertaining banter over countless hours hanging in office cubicles, at sports games, bars, and The Ticket Compound. When the station was sold again to Susquehanna Media in 1997, the new program director, Bruce Gilbert, took the chaos and gave it structure. Gilbert taught the young hosts the ins and outs of radio, how to use the clock, cross-promote, keep listeners, and get new ones. That’s when the station really took off.

“We were attack dogs,” Williams says. “The only thing we cared about was ratings.”

The Ticket dominated in the ratings, regularly ranking first in the 25-to-54 demographic, and became one of the most profitable stations in the Dallas-Fort Worth market. It still is: in 2012 and 2013, The Ticket was No. 2 in the Miller Kaplan Arase radio revenue rankings, behind only KISS FM. And yet, the station has managed to retain its nickname as The Little Ticket, its outsider personality rooted in the upstart days of twentysomething high jinks. The station got rich and so did The Ticket personalities, who became as big as the sports figures they were supposed to be covering.

“I had a Porsche, a Hummer, and two Harleys,” Williams says. “I had a lake house, with two great, fast Jet Skis, right on the water. A big boat. Toys. Everyone else was putting their kids through college. I was buying toys.” The extravagant lifestyle went to his head. “I started believing in all that shit.”

The Ticket hosts had something more than money: they were at the center of a gigantic boys club, darlings in a city that had fallen in love with them. They were the heads of something like the biggest frat house in the world, the ball-breakers in the back of a bus that spanned the entire region. They had the most rabidly devoted listeners in radio, as much money as you could want, and a job that required going into a studio, talking sports, and goofing off for a few hours every day.

By the end of 1995, everyone had moved out of The Ticket Compound. Everyone except Williams eventually got married, and most started families. Time together was reserved for remote broadcasts or special events, like the periodic Guys’ Night Outs.

But The Ticket Compound lives on. They’ve re-created it a couple of times in recent years, renting a house for a week, shoving the station’s hosts in it Big Brother-style, and broadcasting it all. In the past few years, they’ve all gone on campouts, where listeners hear things like the hosts egging on Rhyner to drink a shot of beer once a minute for an hour.

Even without consistent off-air antics, however, the chemistry forged in those early days has sustained the station and its dedicated listenership. “It tracked along with our own development as people,” Keith says. “We had our carefree 20s back at a time when the station was more carefree. And now I think everyone has mortgages.”

It’s a familial bond, and it’s ingrained a stability that’s unheard of in radio. “It is a part of the fabric of my being,” Rhyner says. “All of us know that at least professionally, if not personally, this is the coolest, greatest thing that any of us will ever be involved in. There is nothing that any of us have had, or ever will have, that is anything like this.”

After 20 years, despite multiple offers to go elsewhere, with lures of money, prestige, and national profile, only one of the original four hosts from The Dunham & Miller Show and The Hardline—Williams—has left, and he didn’t do so willingly. 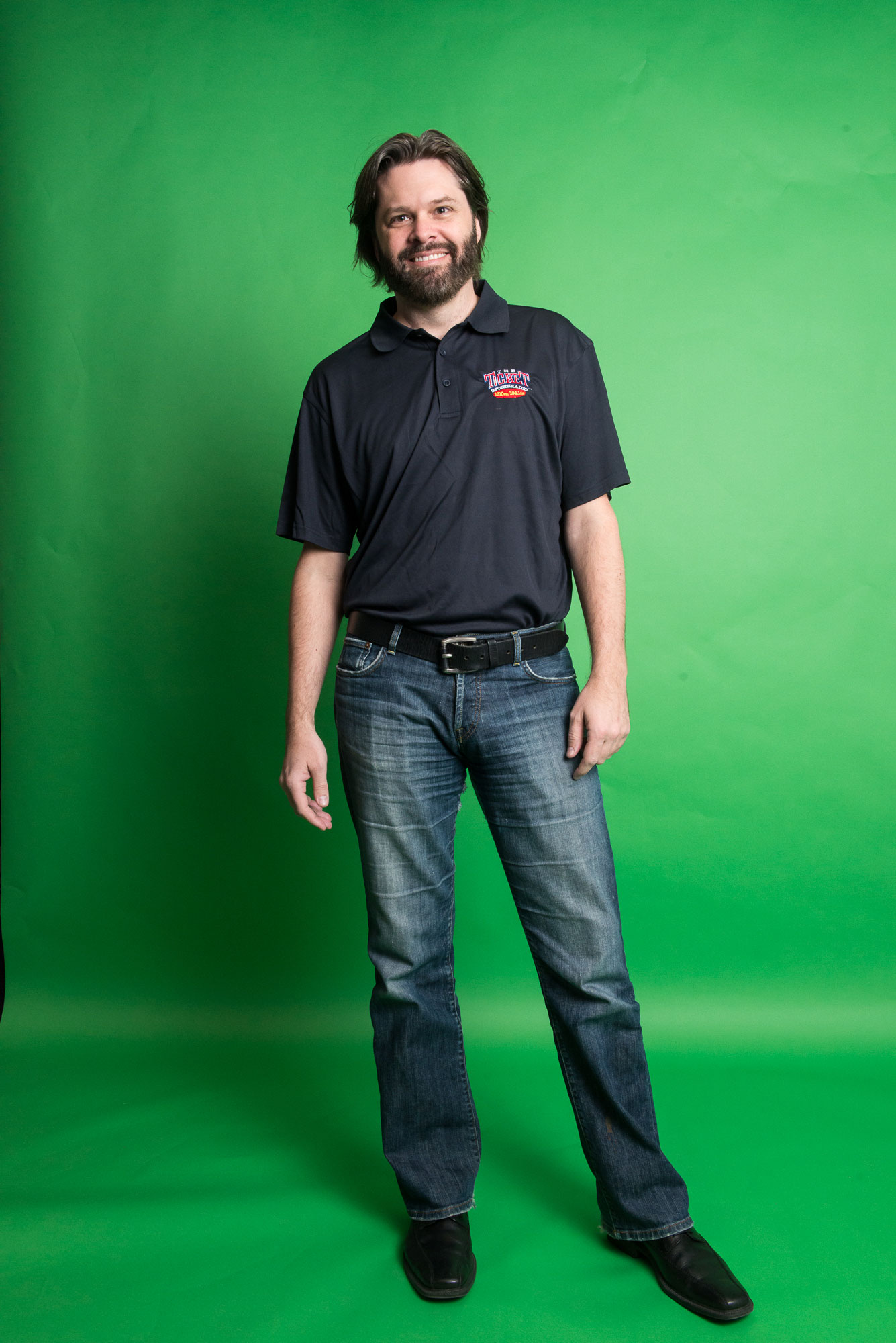 Current-day yuk monkey Gordon Keith
Williams was kicked off The Ticket in 2007, fired after his credibility and ability to function on air had been lost in a haze of drugs and alcohol. For a time, Williams was arguably the most popular personality at the station, a wild, jocular hillbilly with an impossible Texas accent and spectacularly off-the-wall opinions. After getting fired, he bounced to a few spots at rival sports stations before being let go for similar offenses. Now he’s holed up in a house north of Gainesville. These days, his once wide-faced, bulldog scowl has turned gaunt, sallow-cheeked, and scruffy.

At a Chili’s off Interstate 35, just south of Lewisville, Williams slumps behind a table in the corner of the barroom. He rambles, his mind digging back into the small towns of his youth, his failed baseball career, his swinging days as a bartender—always coming back to the events that led to his dismissal from The Ticket. It’s as if he’s trying to tease apart cause and effect, isolating each little bad decision so that, on their own, they don’t add up to the monumental screw-up they all eventually amounted to. He shouldn’t have accepted cocaine at that party in Highland Park. He shouldn’t have gotten lap-band surgery, or lied about it to the guys at the station, which only greased the slippery slope of incredibility. And what about that 24-hour Whataburger that opened back when he was bartending on Greenville Avenue, long before The Ticket? If he hadn’t eaten so many hamburgers, he would never have needed lap-band surgery in the first place.

The Ticket haunts Williams, and his story haunts the other hosts.

“It was awful because he was a good friend,” Miller says. “We just had to move on because it was weighing us all down, such a cloud hanging above everybody.”

Williams’ last months at the station weighed most heavily on Rhyner and Davidson, who were co-hosting the afternoon-drive show with him.

“You can’t describe it,” Davidson says. “How tense it was, how fucked up he was.”

“I had made up my mind,” Rhyner says, in that unmistakable, slow drawl that sounds like a rubber tire on gravel. “By then, next time contract time came around, if he was still here, I was not going to be. There was just so much shit behind the scenes.”

Williams’ story stands as an all-too-real example of what anybody working in radio knows: no matter how long a run you’ve had or how secure your job might seem, you could always be fired before your next broadcast.

“I don’t know how long it can go,” Dunham says of The Ticket. “But I think the day we do start taking it for granted is the day we start getting into trouble.”

For a while, Keith couldn’t reconcile the triviality of his own job, that his success had been created out of the haze of a wild youth that needed to be sustained in one way or another to maintain the personality that had become synonymous with his livelihood.

“I just considered that my job was frivolous,” he says. “You feel like a joke of a human being. No one could actually think that what you do is meaningful.”

But Keith had an epiphany in the hours and days after the planes crashed into the Twin Towers on September 11, 2001.

“It was a week or two when there were no real jokes, when that had been our bread and butter,” Keith says. “We reacted honestly in that emotional time, with our gut and with the listeners in real time.”

After that, Keith, whose job is called “yuk monkey,” started to understand that the station was more than just sports and wisecracks. It was a gathering place, an emotional sounding board, something that was somehow necessary to the city.

“I started feeling that court jesters were important, too,” he says. “And that the relief valve of humor, and the endurance of us being on the air all these years, it meant something. Before, I thought, ‘Well, I’m never going to do anything in my life that has any importance.’ And then I realized that the very thing that I was doing felt important.”