Once their children have flown the nest, many homeowners waste no time decamping for smaller digs. But for Lakewood residents Deanna and Nile Law, downsizing didn’t appeal in the slightest. In fact, these empty nesters were itching for something bigger.

At 1,400 square feet, the couple’s house wasn’t ideal for entertaining or for hosting overnight guests, and they wanted their kids and grandkids to be able to come visit as often as possible. The Laws loved their neighborhood, and they considered renovating, but they couldn’t figure out a way to add on to the house without it being a costly and difficult endeavor. “We really didn’t want to go up with it, and we were constrained going back or out, so we would go out and look at homes every now and then,” says Nile.

“While we upsized, we minimized. We got rid of pretty much everything. Even in our cabinets, we just have basics. It feels great.”

One of those hunting trips revealed that a house they’d toured and liked several years earlier was once again for sale. “This house had a great feeling eight years ago, and when it came back on the market, we were just like, OK, this is a sign,” says Deanna. Besides being recently updated, the 1970s contemporary sat just a couple of blocks from their home, had a backyard pool and cabana, and weighed in at a substantial 4,400 square feet—more than three times the size of their current residence. With all that going for the house, the Laws soon found themselves packing up and moving in. Really, though, there wasn’t much packing to do. “While we upsized, we minimized,” Deanna adds. “We got rid of pretty much everything. Even in our cabinets, we just have basics. It feels great.”

In keeping with that less-is-more approach to life, the Laws wanted the look of their home to reflect their newfound minimalist tendencies. So they enlisted Dallas designer Chad Dorsey—well known for his edited and clean interiors—and gave him free rein in every room in the house. Dorsey’s first order of business was to create a cohesive palette throughout. Bright white walls and silver metal railings lent the home a commercial quality, and exposed brick columns washed in dark gray felt like jarring punctuations. To warm things up, Dorsey opted for a softer white for the walls and brick, then painted the railings the same color. “I wanted to downplay the rail and blend it into the space a bit more,” he says. 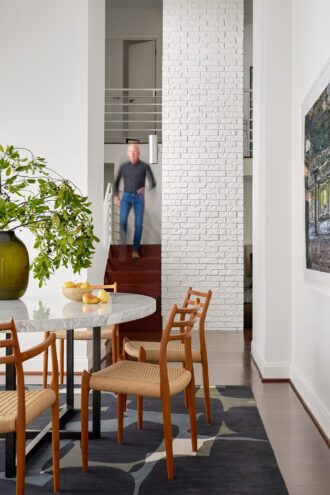 The formal dining area is on the smaller side, so Dorsey went in search of a table that wouldn’t feel like it was taking up the entire room.
Nathan Schroder 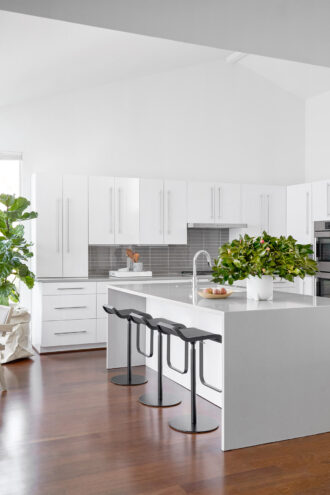 The Laws’ previous kitchen was a galley-style space, so they’ve been making use of the extra room in their new open and airy kitchen by cooking several nights a week.
Nathan Schroder

As for the decor, Dorsey was starting with a clean slate. So he chose sleek, modern furnishings and accessories to complement the home’s architecture, then designed some custom pieces to fit the unique layout. “Sometimes the spaces seemed daunting,” he says. “This house has a very unusual floor plan. Then once I got into it I realized it was going to be really cool.”

Downstairs, an odd little area under the second-floor balcony was “a space for nothing,” says the designer. Now it holds a custom sofa that turned the nook into a snug sitting area. Dorsey also transformed the entire upper level into a retreat for the homeowners. In addition to the primary suite, the second floor houses a guest-bedroom-turned-yoga-studio and a stair landing that he made into a reading nook for Nile and Deanna. Even more impressive, he did it all within a tight 90-day turnaround. “Sometimes you have to think outside how you normally think to make things work,” Dorsey says. “And this was a project that turned out really interesting.”

The main reason the Laws wanted to upsize was so they could more easily entertain guests. But having more space wasn’t the only answer. They also needed the home’s common areas to be comfortable and cozy. In the living room, for example, designer Chad Dorsey took advantage of the voluminous space by creating multiple seating areas. “They wanted it to be livable, where they could have different types of entertaining areas,” he says. “So we defined the room by certain zones so it didn’t feel so large and sprawling.” 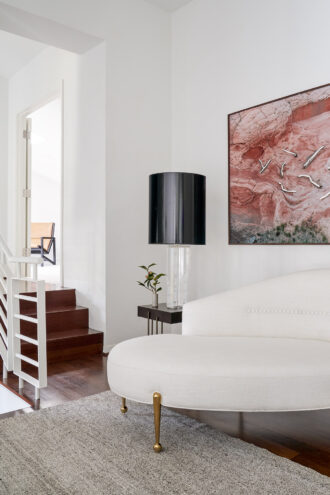 Hardwood flooring was added on the second-floor landing, which, similar to the living room downstairs, features multiple seating areas where the Laws can relax.
Nathan Schroder 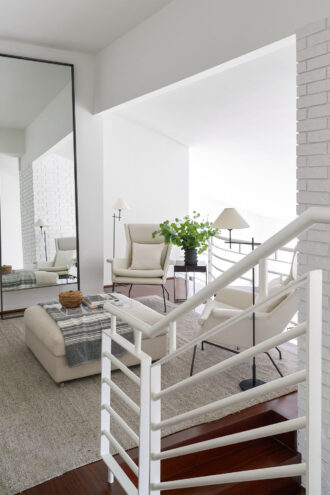 A midpoint between the ground floor and the primary bedroom, the upstairs landing overlooks the living room and acts as a lounge area for the homeowners.
Nathan Schroder

In addition to designing a built-in sofa for one tucked-away section of the room, he placed a pair of loungers and ottomans on one side of the space, then added a sofa and armchair on the opposite side. Besides being conducive to conversation, the two latter seating areas offer views of the backyard and fireplace. Now guests aren’t the only ones enjoying the new layout. “There are so many little spaces to get away,” says Deanna. “I’ll sit over here sometimes [on the built-in sofa] in the morning with my coffee and just snuggle up.”