You may know Chuck Eisemann’s name from the eponymous performing arts center in Richardson. Or, from the management consulting firm he used to run. But you may not know that Eisemann is a talented sculptor who works exclusively in marble and alabaster.

“I just finished the Medici series on Netflix,” Eisemann says with a beaming grin. “I’ve always loved Renaissance art. I really got fired up about the classic Greek and Roman artists while I was in the Army some number of years ago. I was in Greece, sitting and staring up at The Parthenon while reading The Agony and the Ecstasy. And it was magic.”

A look at some of Eisemann’s more notable works. 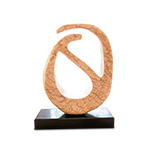 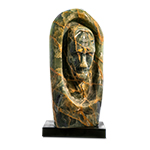 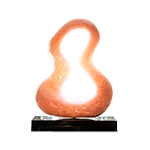 It wasn’t until much later in his life that Eisemann picked up sculpting for himself. It was 2002, following the profitable sale of not one, but two of his businesses. After resigning from most of the committees and advisory boards that he was on, and the general freeing of obligations that comes with retirement, Eisemann found himself in search of something new to consume his time. “During a press event for the opening of the performing arts center, one of the reporters asked me, ‘Now that you’re not working and have all of this free time, what are some of the things you’d like to do?’” Eisemann says. There it was, circled, and at the top of his to-do list.

Eisemann had long had plenty of appreciation for sculpture. He had worked across the street from NorthPark Center and his good friend (and perhaps Dallas’ most famous sculpture collector) Ray Nasher for years. Eisemann had admired a number of pieces in Nasher’s private collection, but learning to sculpt himself would be a new, post-retirement thrill.

To study the craft, Eisemann enlisted the help of famed Dallas bronze artist Bob Hogan, whose works are on display around the world. “He started me out with clay,” Eisemann confesses. “But it just didn’t do it for me.” Hogan encouraged him to explore several mediums, including tin and bronze. But each creative distraction ended with a familiar disappointment for Eisemann. “Finally, I said, ‘Bob, you know I love your work, but I don’t like bronze,’” he recalls.

Other artist mentors insisted he needed to learn sculpting on a less tedious material, like limestone. Again, it didn’t feel right. Marble, Eisemann says, feels different. “When I do something with marble, I can close my eyes and it’s almost like an existential experience,” he says. “It’s really something that speaks to me.” 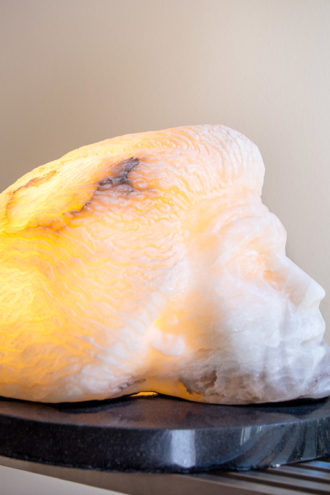 Eisemann eventually met an alabaster distributor who caught his fancy. After a few months of sending pictures back and forth, Eisemann finally purchased five blocks—one that would eventually become Love, which beats with LED lights as you approach it.

“Sometimes I have the inspiration immediately for a piece, like with the heart,” Eisemann says. “I knew right away what that was going to be. And then the brain that I did, I saw that almost instantaneously from the block of stone.”

Eisemann’s passion for sculpture has inspired his international travels. He has experienced behind-the-ropes tours of The Vatican, booked exclusively to view the meticulous process of cleaning some of the world’s most precious sculptures. “You know what’s on the back of Michelangelo’s The Pieta?” Eisemann says, sharing a surprising discovery. “Nothing—because he figured it would be up against a wall.”

Eisemann describes sculpting marble as a long, tedious process. His pieces of art take months—sometimes almost a year—to complete, bit by bit. It’s a methodical process to grind down the marble and then polish and scrub it so as to not overheat. It’s not the tidiest hobby, either—one that Eisemann’s wife insists be done outdoors, due to the excess residue and dust.

But, as often in business, good things come to those who wait. “I get my most creative thoughts when I’m not doing anything,” Eisemann says. “In business it is the same way:  as chairman of a bank, we would have a problem and I’d sit around and think about it. And it’s the same as sculpture. I’d be out there mowing the lawn, and I’d get my most creative thoughts and solutions. It’s just something that comes to you—whether it’s business or art. It’s human endeavor.”