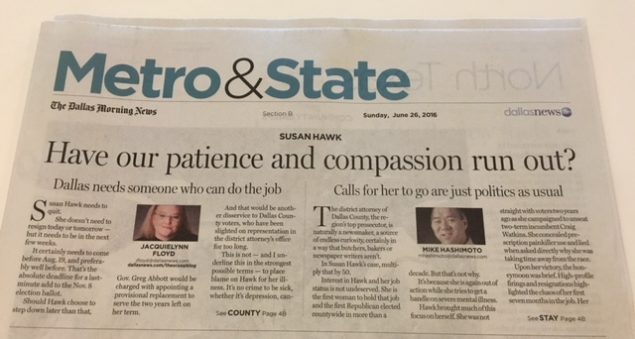 Yesterday DMN columnists Jacquielynn Floyd and Mike Hashimoto squared off on the front page of Metro. She argued that Susan Hawk should resign in time for a special election for DA to appear on the November ballot. He argued: “At some point, [Hawk] might need help making that decision, whichever way. Sooner than before, perhaps, but not yet,” whatever that means. I think it means that Hawk deserves to keep her job. This columnar face-off is a lot more fun, by the way, if you know that Floyd and Hashimoto are married. They are. And she destroyed her husband in this argument. Really, I feel bad for the guy. No one deserves to be publicly humiliated like this. To give you an idea of how poorly he performed, here’s how Hashimoto wraps up his column:

I don’t want to be the one who tells someone in a hospital that they also should quit their job. On a far lesser scale, I’ve been that person; a spinal cord injury knocked me out of service for about six months from late 2014 into 2015. I will always appreciate the newspaper’s kindness and compassion during that time.

You could replace the words “on a far lesser scale” with the words “even though this has nothing to do with anything because you can’t compare a newspaper columnist with the person who was elected to run the county’s criminal justice system.” Or you could rewrite the material that follows the introductory clause, like this: “On a far lesser scale, I had a cat once that liked to eat wasabi peas.”

Dallas’ most important news stories of the week, delivered to your inbox each Sunday.
Jacquielynn Floyd Mike Hashimoto Susan Hawk

Inside joke
By Tim Rogers
Politics