The two local groups will host a free event with art, music, and food called (de)CONSTRUCT(ed) on December 10.
By Rosin Saez | December 10, 2021|4:01 pm
Advertisement
On Wednesday afternoons and well into the evening, a gravelly parking lot off Ferris and Orleans streets in South Dallas becomes a temporary food distribution hub. From about 4 p.m. until well past sundown volunteers get to work.

They move pounds of produce that was previously destined for the landfill from trucks, freeing them from pallets and sorting through box after box of fruits and vegetables—underripe tomatoes, overripe berries, perfectly good, if a little too sweaty, heads of lettuce. Anything that they wouldn’t eat themselves gets piled into compost bins, which will be put to use on local farms. Everything else is divided into crates—vessels of bounty that will be loaded into car trunks a few hours later.

This is the scene at 4DWN Skatepark where Harvest Project Food Rescue stages food distribution for those experiencing food insecurity.

“Skaters have always rebelled, and in this world today, being decent, doing the decent thing is rebellious,” says Rob Cahill, who co-founded 4DWN with former pro skateboarder Mike Crum. Volunteers, many local skaters among them, organize fresh food into plastic crates for families to take home. “It’s rebellious for us to do this,” Cahill told me one recent Wednesday night.

Cahill also says he wants to continue building community around volunteerism. People can skate for a couple of hours and volunteer for a few, too, all while a live DJ keeps the energy up. He’s even in talks with DJ Sober to come provide the tunes for Wednesday distribution nights.

4DWN is one part of the multi-org collective that comprises The Food Justice Coalition. Alongside them, there’s Harvest Project Food Project, Oak Cliff Veggie Project (it runs food distribution and urban farming education programs), Project La Familia, whose chef and founder, Diana Zamora, provides meals to the community and volunteers, and Restorative Farms. (You can sign up to volunteer here.)

Cahill and his cohort have been helping to fight food insecurity since early on in the pandemic. But they plan to expand their impact.

To accomplish such expansion efforts—and rally the community around the food justice cause—4DWN and Harvest Project are hosting a free, open to the public, community event on December 10.

The party, which will be at 4DWN’s indoor/outdoor skatepark on Ferris Street, will have art by Ruben Afredo and live music courtesy Cure For Paranoia. Pro skater Kareen Campbell and other as-yet-unnamed celebs will be in attendance.

More details per the press release:

“Open to the public, attendees will experience live music performed on the large 4DWN event stage overlooking scenic downtown Dallas and the breathtaking Dickies Verticle Ramp. Complimentary food will be served in the venue’s entrance garden and mural area. Large art pieces installed in the indoor skatepark’s art gallery will be on display, with limited prints of the art available for purchase; proceeds benefitting both nonprofit organizations (4DWN and Harvest Project).”

The aforementioned Zamora, executive chef of Harvest Project and Project La Familia, will serve plant-based “deconstructed cuisine” from some of the rescued produce. 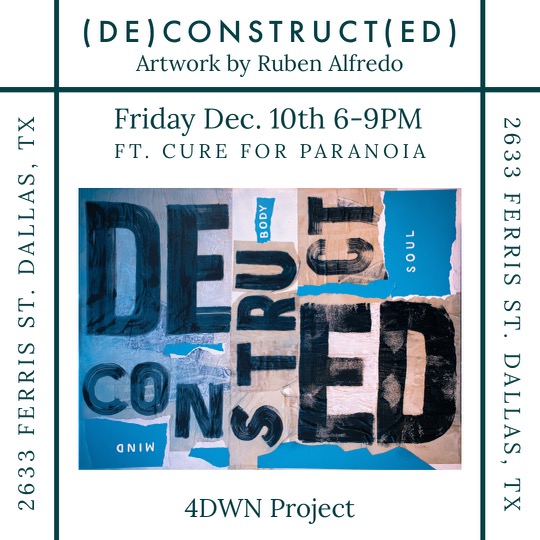