The Texas Department of Transportation will today unveil plans to lay a trench for Interstate 30, bringing it below grade from downtown to Dolphin Road, about 3 miles east. The goal, according to the agency’s Mesquite-based engineers, is to reconnect the streets and communities that the highway severed, particularly near Fair Park and East and South Dallas neighborhoods like Owenwood, Jubilee Park, and Dolphin Heights.

But the state is still planning to widen the road, adding a lane in each direction and an additional reversible managed lane down the middle. That would make I-30 a 12-lane highway. (The city hopes to one day use one of those managed lanes for bus-only access to and from downtown.) Doing so will require TxDOT to acquire some land, which the engineers say is minimal and will be far outweighed by the land that will be freed up for development by removing ramps and other infrastructure.

The preliminary engineering plans displace about a dozen parcels, mostly near Old East Dallas and Baylor University Medical Center. It appears nowhere near as disruptive as TxDOT’s controversial highway expansion plans in Houston, which involve acquiring land that houses about 1,000 residents adjacent to Interstate 45.

As it stands today, this portion of Interstate 30 is a concrete monster that is elevated as it runs east out of downtown and then rides berms over neighborhood streets on its way to LBJ Freeway. It opened to traffic in the 1960s and TxDOT has begun a phased approach to updating the roadway as it reaches the end of its lifespan. The agency began with the portion known as the Canyon in downtown, which is fully designed and has secured funding.

The second phase of the project will arguably be more impactful, a 4.4-mile extension from downtown to Ferguson Road. When I-30 was built, neighborhoods south of the interstate were cut off from those on the north side of the highway, which today are generally more affluent and have better access to jobs, transit, healthcare, and other services. The highway is a neighborhood killer.

“There has to be some integration into Fair Park,” says Majed Al-Ghafry, the assistant city manager over infrastructure. “If you don’t have a depressed section that would be almost at the same level as the street grid, you’re still going to have a community divided. The whole idea is to connect communities.”

This project is the first real test of the 2016 study known as CityMAP (for Master Assessment Process), which analyzed how the freeways that cut through Dallas could be redesigned to help the neighborhoods they harmed. CityMAP called for highway overhauls to refocus their attention on people, not automobiles.

Mohamed “Mo” Bur, the top engineer for TxDOT’s Dallas district, says the agency tried to minimize right-of-way acquisition while “creating opportunities for connecting some of the old street grid that was taken away.” “What came out of CityMAP was to focus on mobility, to focus on connectivity, sustainability, and economic development opportunities,” Bur says. “Those four themes are always in the back of our mind when we’re developing these scenarios.”

Indeed, here is the language from CityMAP about this portion of the freeway: “The East Corridor segment of I-30 has a rich cultural history that dates well before the interstate was constructed. Today, the majority of people think of I-30 as the divider between North Dallas and South Dallas.” 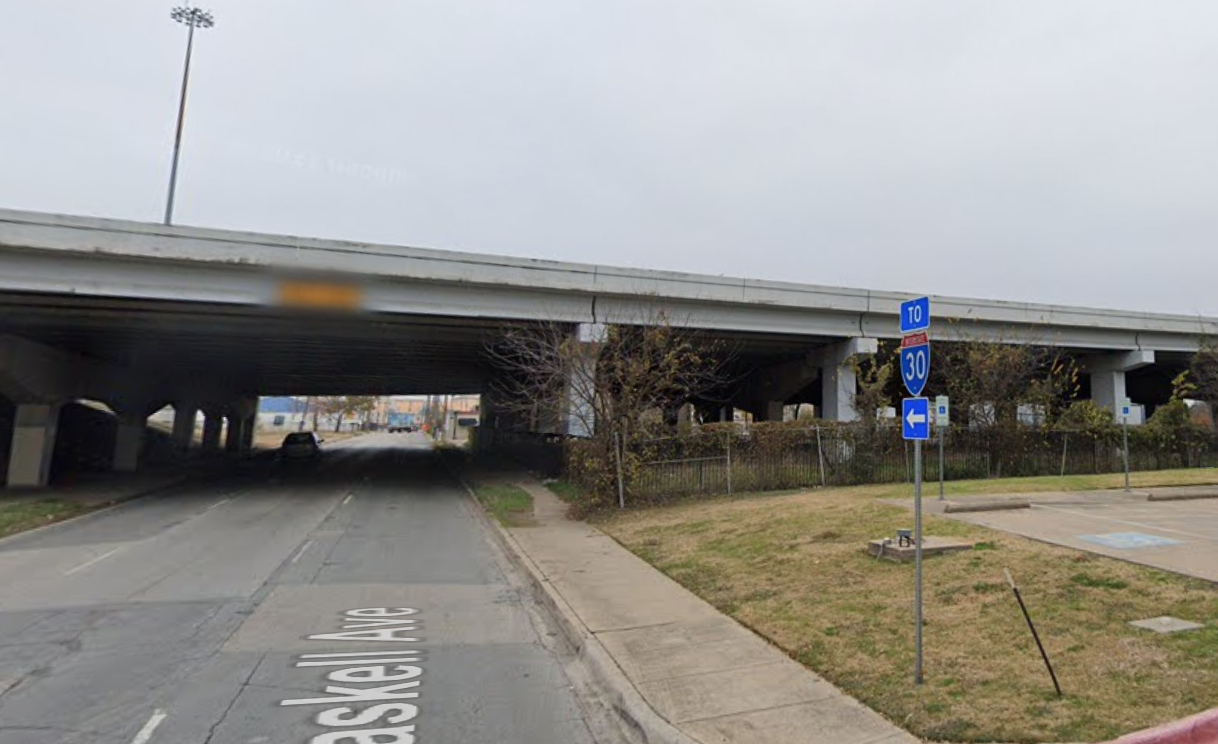 The existing conditions at Interstate 30 at Haskell.
Google Maps

This second I-30 phase shares many characteristics with the Canyon, where the state hopes to connect nearby neighborhoods and provide new pedestrian infrastructure while freeing up land for development by removing ramps. The preliminary design schematics show new bridges across the roadway through East Dallas. TxDOT plans to provide infrastructure to allow for bridges at many points across the freeway once it is brought below grade, similar to Central Expressway. Al Ghafry didn’t think that was a totally fair comparison, noting that Central’s walls and imposing frontage roads still separate neighborhoods.

The plans also create a new bridge over what’s being called 4th Avenue, just west of Fair Park. The bridge at Commerce Street could also be pedestrian-only, but that will be the city’s decision, according to TxDOT spokesman Tony Hartzel. The state is planning to incorporate “Complete Street” elements—wide sidewalks, bike lanes, and other features to make it safer for pedestrians—in each of those bridges. There are possibilities for deck parks where some of these connections would be, particularly near Fair Park and further east near Munger, but the state will not pay for that. The specifics are not yet colored in and the city and its partners will need to foot the bill for many of those improvements.

Some of the adjacent streets will get an overhaul, as well. You’ll no longer have to use the tiny, residential Ash Street as a de-facto onramp to the westbound portion of the highway. And the confusing Munger intersection will be replaced with a traffic circle north of the highway. Another traffic circle will come to Fitzhugh, just south of the freeway. Most of the cumbersome off-ramps will be removed and the land can be developed.

“We’re trying to squeeze the frontage roads in as much as we can to free up some potential surplus,” said Nathan Petter, an assistant area engineer for TxDOT’s Dallas district. “We’re trying to make as much space as we can.”

Then there is the matter of traffic counts. CityMAP actually explored this widening option and found it would increase the average daily volume from 153,000 vehicles to 205,000. But the state’s traffic counts show it has been a decade since that many vehicles used this portion of Interstate 30. Too, CityMAP estimated speed would only increase by 1 mph with the other lanes, compared to the projections in the North Central Texas Council of Governments’ 2040 Mobility Plan. Based on a resolution two years ago, the Dallas City Council will surely have something to say about that.

In 2019, council passed a series of guiding principles for this project. Council requested the highway not be any wider or higher than it currently is. TxDOT has the second part down, but the plan would require more right of way to widen it. The current highway ranges from 195 feet to 483 feet wide; the plans would take that between 308 feet and 505 feet.

The political appetite for that remains to be seen. A staffer for Councilman Adam McGough, the chair of the Transportation and Infrastructure Committee, said they had not yet been briefed on the state’s latest plans. The council members whose districts most closely touch this part of the freeway, Adam Bazaldua in District 7 and the incoming Jesse Moreno in District 2, were unavailable for comment or did not respond to requests for comment.

The Interstate 30 redo won’t go forward without attention to context. Other projects that impact I-30’s future include I-345, the 1.3-mile elevated interstate between downtown and Deep Ellum that TxDOT is considering burying or removing; the D2 subway system downtown; and the terminus for high-speed rail, which is expected to be located near the Kay Bailey Hutchison Convention Center. These are all being planned in tandem, Al Ghafry said. A public meeting for I-345’s future is set for June 22.

For I-30, a series of public meetings begins Tuesday at Fair Park and online. Watch it here. From there, expect the City Council to be briefed in the next few months. The state will pursue environmental clearance by the summer 2022. It would acquire right of way the next year and begin construction in 2024 pending funding. TxDOT anticipates it costing more than $1 billion; it currently only has $50 million approved, Hartzel said.