The state and the city finally have plans for the Canyon.

The 1.3-mile stretch of Interstate 30 between downtown and the Cedars will include six eastbound and six westbound lanes, but its footprint will be reduced, mostly by eliminating the many cumbersome and confusing ramps. The freeway will remain depressed below grade, and the city plans to change the surrounding street design to make better use of the existing grid rather than adding frontage roads. There are planned deck parks, pending city funding. The goal, the two sides believe, is to stitch the Cedars with downtown as best they can, considering the neighborhoods will remain split by an enormous interstate.

Texas Department of Transportation engineers and city of Dallas transit officials briefed the public about their plans for the Canyon on Tuesday night at the Omni. They’ve come a long way, considering seven months ago they basically weren’t talking. In the time since—and after meeting every two weeks—they’ve developed a plan and got it partially funded. The state has allocated $300 million for construction, which could begin as soon as 2022. At the Omni, about 200 people showed up to hear about the plan, including residents, property owners, public officials, and representatives from major development firms with interests in the Cedars.

It’s the first true test of TxDOT’s CityMAP, the landmark 2016 study that examined options for redesigning the freeways that cut through Dallas’ core and improving connections between the neighborhoods that they separated. The study’s section on I-30 focuses heavily on the damage the freeway did to the once-thriving Cedars neighborhood, which it classified as a “fragmented area.” CityMAP advised connections with downtown via deck parks, which the city will have to pay for, as well as bridges over the freeway framed by “complete street” elements like protected bike lanes and greenspace. The state’s preliminary engineering schematics include those elements. The proposal also compresses the freeway, removing many of the excess frontage roads and ramps. Doing so will free up about 14 acres of land that can be developed.

“Stitching the community together was really what we wanted to do in a significant way instead of having a Dallas that’s north of I-30 and a Dallas that’s south of I-30,” said Michael Rogers, the city’s transportation director. “How do we bridge that gap?”

The answers are both dramatic and simple. For the former, consider the ambitious deck parks, one spreading from Griffin to Akard, envisioned as an even wider Klyde Warren, with the freeway occupying a tunnel below, like a 12-lane Woodall Rodgers. The other is farther east, divided into three open decks between Harwood and St. Paul to avoid all the required ventilation and fire suppression requirements that will need to be placed in the tunneled freeway. TxDOT’s deck park plans are merely possibilities—without funding outside the $300 million, those won’t happen. But the state plans to design the infrastructure to allow for such additions, whether the money comes quickly or if it takes decades. (“This is what we want in the future. Now you build it, design it, get it ready for us,” said Rogers.)

“Whatever we need to do to make sure the city streets are connected will be part of the $300 million, but anything we feel is a betterment or part of an extra, that’s not something we’re going to cover,” said Mo Bur, TxDOT’s top engineer for the Dallas district.

The state will, however, pay for bridges with wide sidewalks and—supposedly—cycling infrastructure next to low-speed vehicular lanes over key crossings: Lamar, Griffin, Akard, Browder, Ervay, Harwood, and Cesar Chavez. (The virtually unused and narrow Browder, in fact, is planned to become a pedestrian boulevard with a connection across the highway, as suggested in CityMAP. The street itself has an outlet at City Hall that breaks off until you cross the freeway. It continues about a mile to Corinth in the Cedars. This plan connects those two over I-30.) 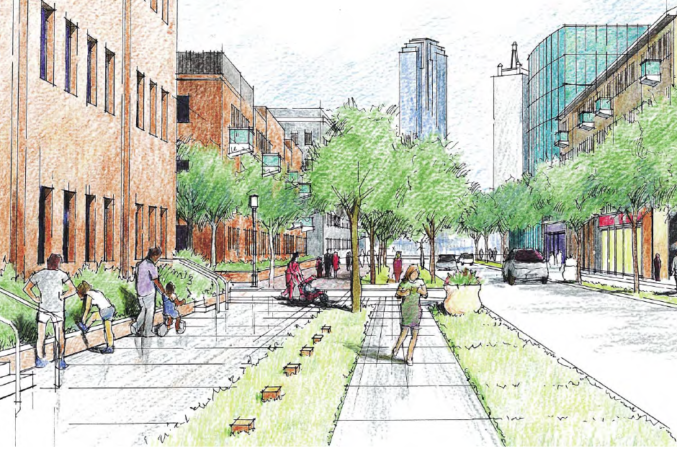 A re-imagined Browder Street, in the Cedars. (From TxDOT’s CityMAP study.)

The existing freeway will be moved south. The westbound frontage road will be removed, freeing up the land. In its place will be what the city believes is a meandering parkway that provides access to the streets north of the freeway that lead into downtown. A two-lane frontage road beginning at Good Latimer will provide access to the freeway and to the new boulevard, and westbound traffic will have opportunities to head north at Cesar Chavez and Harwood before reaching the parkway. The state believes this will slow speeds and is planning on incorporating those complete street elements here, including bike lanes. That boulevard will eventually turn into Cadiz, which currently dead-ends onto Lamar in a very strange way. (Also of note: the Lamar loop off 30 is gone.) The new road will cross over the freeway and be a direct connection between the Farmers Market and the area that will house the planned high-speed rail terminus.

“We’re picturing that as a city street boulevard, so it’ll be two-way. It’s a low-speed design, really a boulevard-type design,” said Ceason Clemons, deputy engineer for TxDOT’s Dallas district. “Originally, we were hugging the main lanes as much as we could. The city brought it to our attention and asked, What can we do with that land?”

A new parkway that will run adjacent to the freeway and be at-grade with the proposed deck park. (Photo courtesy city of Dallas)

Between the freeway and that boulevard will be 3.72 acres of developable land, which abuts the deck park. That deck park connects with Dallas Heritage Village. There are other pockets of land that will be available after freeway infrastructure is removed: an oval-shaped 2.3-acre plot next to the deck park on Akard, not unlike the plot that houses Museum Tower; a 1.4-acre triangle between Lamar and Cadiz; and 3.7 acres created by tearing out the spaghetti bowl of ramps that shoot off from Cesar Chavez.

That last component was one of the recommendations from CityMAP, which called for turning Cesar Chavez into a “simple diamond interchange with connections to I-30,” to allow for improved connectivity between downtown and South Dallas. Meanwhile, the traditional freeway access points would be located on the eastern end at Cesar Chavez and the western end at Griffin.

Rogers says the city made it a priority to rethink how to spread out capacity on the street grid, simplifying the connections in the Cedars and using bridges and deck parks to mask the freeway for drivers and pedestrians. But that requires a significant investment from the city—which means that requires a significant investment from the private sector. Is the market ready for such a commitment? After all, Woodall Rodgers opened in 1983. Klyde Warren opened in 2012.

“A lot of the more ambitious parts of this project, the decks and the redesigned streets with better streetscape, they’re going to really depend on private partnerships,” said Peer Chacko, chief planning officer for the city of Dallas. “Those go above and beyond what the city normally does with streets.” 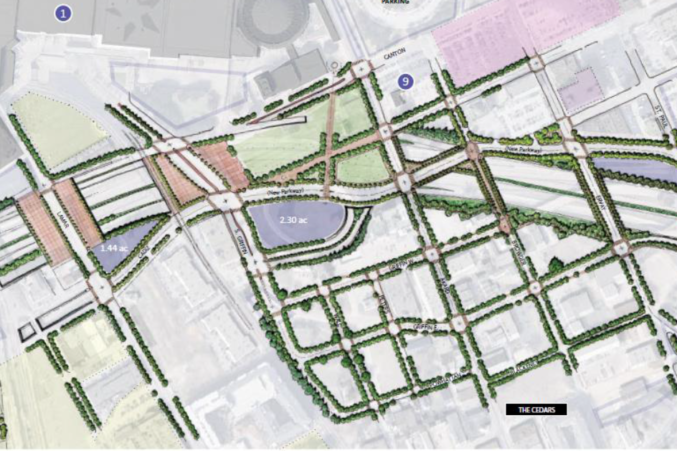 The western edge of the proposed Canyon project. (Photo courtesy city of Dallas)

Chacko noted that funding from Public Improvement Districts could help pay for maintaining and programming. He also said the city will consider purchasing portions of the surplus land to maintain its planned connections with public spaces like Dallas Heritage Village.

“Just because there isn’t a street doesn’t mean we won’t have public access there,” Chacko said. “We’ve hinted at it in the drawings. Pedestrian bike access will be critical there. We want that to be a public space.”

The city believes this to be a smart bet. There is established development interest along this corridor. Two developers control significant plots of land along the Canyon. Matthews Southwest, the earliest developer to be bullish on the Cedars, is planning the high-speed rail terminus at the western edge. Developer Mike Hoque is planning an innovation district near City Hall, north of I-30, as well as a mixed-use development called SoGood at the Canyon’s eastern end. Matthews Southwest couldn’t be reached for comment, and Hoque didn’t want to talk on the record just yet.

TxDOT will have to purchase a vacant building, and Eddie Deen’s Ranch will need to be relocated, Clemons said. No other existing business will be impacted, however TxDOT will need to negotiate right of way with DART as well as the four railroad companies that use the freight rail line along Hotel Street, at the project’s western edge. Bur said 40 trains a day feed through that system.

CityMAP’s projections also included a deck park near Lamar Street, but Rogers said a large drainage pipe made it impossible to bury the freeway as low as needed to pull that off. But he said research is ongoing, and wouldn’t rule out an even higher park that would link the rail terminus to the convention center across the freeway.

The plans are preliminary, and there is still the fact that a freeway still cuts through one of the most important portions of the city. But remember: Dallas wasn’t really talking to TxDOT as recently as March. Now the project is partially paid for and moving forward. The next portion will include Interstate 30 east of I-345. And what about when we finally get around to tearing down 345?