Dallas’ trail system is about to get a little more connected. On Saturday, crews will break ground on a bicycle and pedestrian bridge—spanning U.S. 75 just north of Royal Lane in North Dallas—to connect Northaven Trail to trails east of the highway, including White Rock Creek and Cottonwood Creek. The half-mile expansion of the Northaven Trail, which the Texas Department of Transportation is building with a $9.3 million price tag, is expected to open by spring 2023.

“This bridge really will bring neighborhoods closer together,” says Jeff Kitner, president of the Friends of the Northaven Trail, who was out walking the trail when he called Tuesday morning.

Right now, it can be a hairy trip for cyclists and pedestrians who have to go under Central to get from Northaven Trail’s current eastern terminus in North Dallas to points farther east. This bridge will make that crossing a whole lot more pleasant and go a long way toward linking up some key Dallas trails. A TxDOT fact sheet says it “will stand as a regional example of the positive benefits of appropriate location and design aesthetics for future bicycle and pedestrian trails and amenities.” And of course, as a general rule, the more we do to encourage people to get out of their cars, the better.

Fittingly, Kitner is encouraging people to walk or bike to the 10 a.m. groundbreaking ceremony, at the southwest corner of Northaven Road and the southbound U.S. 75 frontage road near the Cindi’s NY Deli. Kitner says Dallas County Judge Clay Jenkins, Mayor Eric Johnson, and TxDOT Commissioner Robie Vaughn are expected to be on hand for the groundbreaking. Word on the street is that outgoing Councilman Lee Kleinman is even bringing breakfast tacos.

Some renderings from TxDOT are below. In principle and appearance, it somewhat resembles the bridge that opened in 2017 to span Mockingbird Lane and connect the White Rock and Katy trails. Construction of the Northaven Bridge will also create some dedicated parking for anyone who wants to get there in a car and use this spot a sort of trailhead. 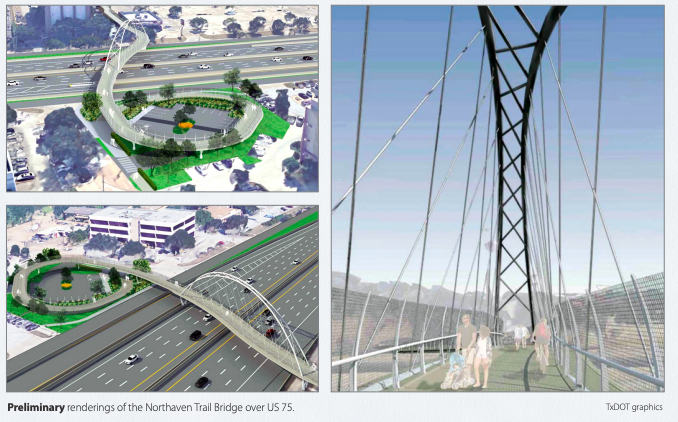 Renderings and map courtesy of TxDOT. 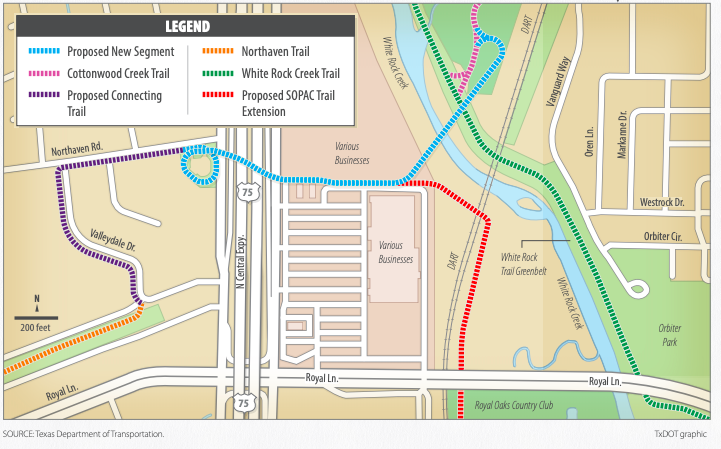