The Dallas mayor wants the city manager to know how upset he is with him.
By Matt Goodman | May 23, 2020|1:08 pm
Advertisement

Mayor Eric Johnson kicked off Memorial Day weekend by sending a testy memo late Friday to the city manager about the way in which the city’s committee structure has worked in recent weeks. In the page and a half memo, Johnson blamed City Manager T.C. Broadnax for creating “unnecessary conflict” among council members and chided him for not listening to concerns raised by members of Johnson’s staff. Broadnax responded by basically saying his weekend had already started and he’d deal with the issue on Tuesday.

The tension has played out publicly over the last week. When the pandemic reached Dallas, Johnson created two ad hoc committees focused on the city’s response to the coronavirus. Now that regular committees like transportation and public safety are again meeting, it seems most council members believe the work of those ad hoc committees is duplicative. And yet those meetings remain on the city’s calendar. So this week, the members of one of those committees just didn’t show up.

Johnson is still peeved about this — particularly so because that ad hoc committee was to take up an item that Johnson championed that would require the city to prioritize hiring contractors from the city of Dallas. The mayor wanted the ad hoc committee to discuss that item before it went to its regular committee. Now he’s saying that the council members who bailed on the ad hoc meeting were right about the meeting unnecessarily doubling the work, but “their tactic was clearly wrong.”

“Not only did your decision overstep your authority,” the mayor wrote, “it also created the impetus for unnecessary conflict among members of our City’s governing body. As the presiding officer of that body, charged with maintaining its decorum and civility, I cannot abide by this.”

Here is the full memo:

Eric Johnson Memo to TC Bro… by goodmoine on Scribd

Johnson cited his “decade in the Texas Legislature,” arguing that “in a legislative body, the referral of a policy matter to a committee is as much a policy decision as the content of the policy proposal itself.”

It seems that he wants more power over which committee hears which item and when. I have emailed the mayor’s chief of policy and communications for comment.

Broadnax didn’t bite. He instead replied to the full Council. He said he disagreed “with many things in this memorandum.”

“I fully understand my role and duties as the City Manager. I do not need to read the charter with precision to know how to fulfill my responsibilities, particularly since I have been doing it effectively for the City of Dallas for the past 3 years,” he wrote.

Broadnax said he’ll respond in more detail on Tuesday, but “in the meantime, I am going to enjoy the Memorial Day weekend with my family.”

It is another chapter of Mayor Johnson’s public flogging of colleagues. Last week, it was a tweet calling out those who didn’t show up to the ad hoc committee meeting. He has taken time during council meetings to lecture his colleagues about decorum. He has lobbed criticism at County Judge Clay Jenkins for his handling of the pop-up COVID hospital at the Kay Bailey Hutchison Convention Center. And now, he used the memo to chide the city manager heading into a three-day weekend during a pandemic. And as one council member told me on background, “T.C. is over the drama.” Here is T.C.’s response to the mayor: 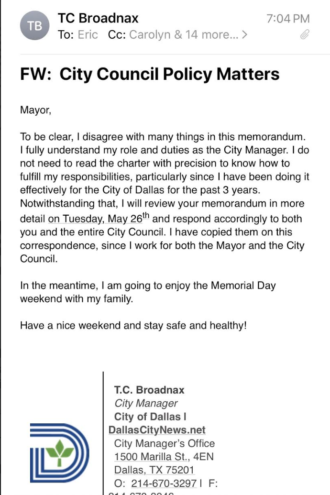 Dallas’ most important news stories of the week, delivered to your inbox each Sunday.
Eric Johnson T.C. Broadnax

Now THIS is creative.
By Tim Rogers
Sports

What was the mayor of Dallas thinking?
By Tim Rogers
Health Systems

Both women have spent time in several HCA hospitals around the state.
By Will Maddox
D Magazine Directories