The Dallas Police Department received 82 complaints from the public in January alone, a figure revealed via last year’s city ordinance that created a new civilian board to keep tabs on investigations of police behavior. The revamped Community Police Oversight Board met again last night and provided a new glimpse into how the department handles complaints against its officers.

According to Assistant City Manager Jon Fortune, there were 90 complaints in December, 71 in November, and 96 in October. The steady stream of complaints will be awaiting the arrival of Tonya McClary, who will start as head of the city’s Office of Community Police Oversight later this month. She will then need to staff her three-person office, which will watch over ongoing investigations of DPD officers if the allegations were triggered by an individual outside the police department. (Inquiries that start internal, including the recent investigations of the vice unit and the social media conduct of some officers, will be reported to McClary’s office after the fact, Fortune says.)

Those 339 complaints have come in through letters sent to the Office of Community Police Oversight as well as the department itself. But the most interesting part of Fortune’s presentation on Tuesday—his last before McClary briefs the board on these matters going forward—is where these complaints lead.

From January’s batch of 82 complaints, police did not investigate 36 of those. There are a few reasons for this: the complainant failed to articulate their allegation or did not provide enough information, or a preliminary investigation determined there was no violation of department procedure. DPD is still investigating 15 of the cases.

That leaves us with 31. Of those, four were referred to the Dallas County District Attorney’s Public Integrity Unit. Eight prompted investigations from DPD’s Internal Affairs unit, which takes on the department’s most serious examinations of officer conduct (these are also the cases that McClary’s office will keep tabs on when it’s up and running). In January, Internal Affairs looked at two cases of racial profiling and two cases of use of force. Finally, 19 investigations were funneled toward specific divisions. All this is in the chart below.

Fortune was not able to answer a question Tuesday night about how these numbers stack year over year. I have a call out to him and will update here if and when he gets back to me. But one would assume they’re on the rise. The Board has been working to engage the community on how to file complaints. Here’s that chart: 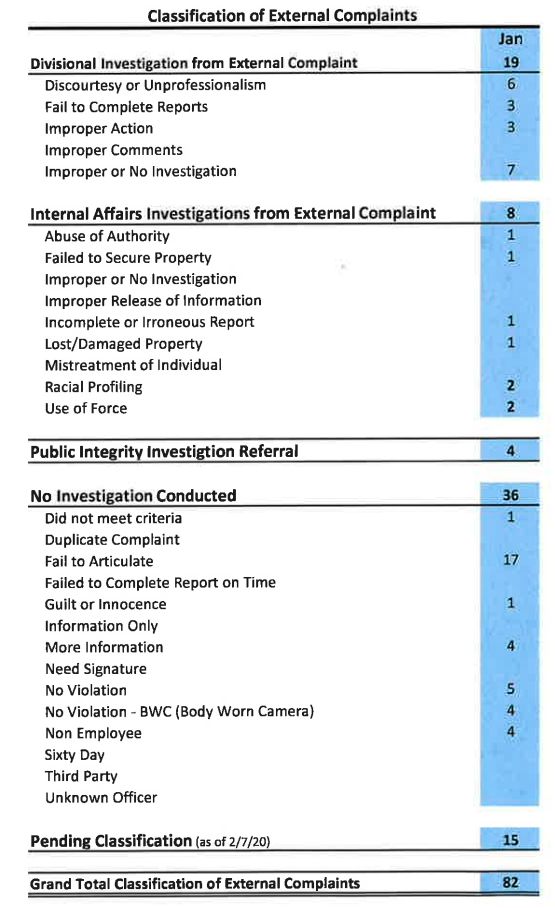 A look at how complaints made against DPD officers were handled in January.
Tags: