You wouldn’t necessarily know it by listening to DART President Gary Thomas, but a dozen years since the idea for D2 first came about, many mission-critical questions remain about the city’s planned subway system. Chief among them is whether DART could come up with $300 million, should it miss out on federal grant dollars.

D2 is a massive undertaking. Its current planned route runs from near Victory Park and follows Field southbound to Commerce. From there, it heads east through downtown, cutting under 345, onto northbound Good Latimer. It is expected to cost $1.4 billion.

On Tuesday, Thomas went before the City Council’s Transportation and Infrastructure Committee to update them on D2’s progress. His presentation focused on incorporating train stations into the fabric of the city. One concept integrates a station into a reimagined Pegasus Plaza.

But more critical is the degree to which DART will have to acquire public property, whether D2 can play nice with TxDOT’s eventual plans for 345, and, of course, the money.

Let’s start there. DART wants to cover about $700 million of the total cost with a (roughly—we’ll get to that) 50-50 grant from the Federal Transit Administration through a program toward which the Trump Administration has shown little allegiance. On Tuesday, Thomas continued to speak confidently about the likelihood that the grant will materialize.

Asked by North Oak Cliff Councilman Chad West how the agency would cover the gap if it doesn’t, Thomas said DART could choose to issue up to $1.1 billion in debt—in the form of a bond—and seek the remaining $300 million from a variety of sources. He wouldn’t name any of them outside of the North Central Texas Council of Governments, who Thomas said was “very knowledgeable” of the project—although he stopped short of saying COG had offered cash. “We just have not had that conversation yet because we remain optimistic the CIG grant will remain in tact,” Thomas said. He told Councilman Adam Bazaldua that as long as the project stays within the $1.4 billion estimated cost, DART doesn’t expect to ask Council for money.

If the grant does remain intact, those who’ve nerded out over the grant’s specific requirements may find solace in Thomas’ commitment to ask the feds for slightly less than a 50-50 match. DART now appears set on applying for a grant that would put the feds’ responsibility at just under half the total cost—Thomas says 47 to 49 percent. This is important because it maximizes the project’s rating with the FTA. D2 has rated medium-high. For wonky grant scoring reasons, notching that down a percentage point is a very easy way to bump it up the scoring system and toward the top of FTA’s priorities. DART should’ve grasped that earlier. It seems to now. 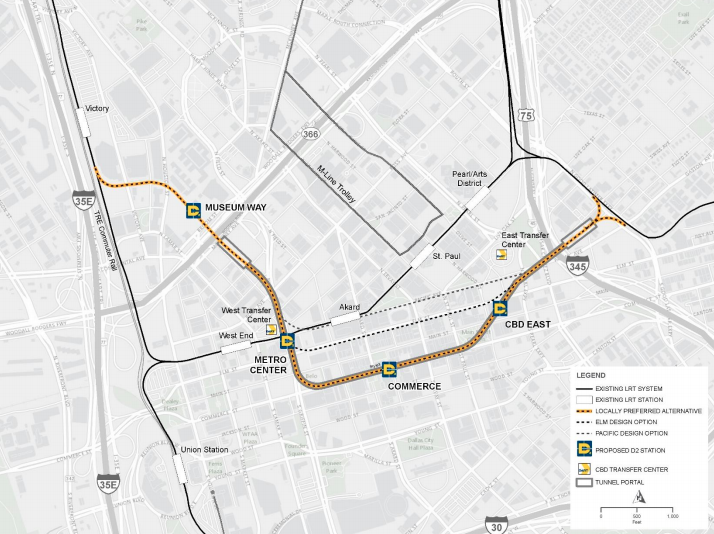 The D2 subway would run from Victory Park through downtown and toward Deep Ellum.

But D2 is not downtown’s only pending transportation project. TxDOT’s plans for I-345 could stitch together Deep Ellum and downtown, neighborhoods divided by the 1.4-mile stretch of elevated highway that connects Central Expressway with I-45. Options include repairing it as is, removing ramps, taking it below street grade, or removing the highway altogether.

Getting both right will require coordination between the two responsible entities as well as the city, so that timelines can align and one project doesn’t sweep the legs of the other. Only in December did TxDOT begin its two-year march toward choosing a “preferred alternative,” beginning with a period of public input. Adding I-30 to the mix, Councilman Lee Kleinman urged staff to take a leading role in driving collaboration between the three entities. “The flip side of that is we got to get the project done,” he said. “We can’t be in analysis paralysis.”

Despite funding concerns and timeline uncertainty related to 345, Thomas told Council that DART has started to move forward with property acquisition related to D2. He said that the agency already added $100 million to the expected cost of the projects due to rising property values.

Waiting longer, Thomas says, would mean costs may continue to go up or developments could get built. DART has to get Council approval to use eminent domain, but Thomas says the agency has started identifying properties that it deems critical to the project and entering negotiations to buy outright. Pressed by West about what would happen to those properties should the project fall through, Thomas said DART would put them back on the market. He said DART will continue to update Council as things progress.