The answers to the questions around I-345—the freeway that connects two freeways and divides two neighborhoods—will be what determines its future. But where can the public ask those questions?

Earlier this month, the Texas Department of Transportation launched a two-year study that will produce what it calls its “preferred alternative,” the state’s preference for what to do with the aging highway as it nears the end of its lifespan. But the public meetings that kicked off this process have been criticized by some as lacking context about the potential impact of what’s actually being considered. And partly, that is by design. TxDOT has said it is only beginning its research and isn’t comfortable detailing anything that isn’t complete. Which includes detailed traffic counts, capacity, total cost, and the way in which the plans for the highway—including everything from removal to rehab—will affect the residents who live nearby.

Last Thursday, D Magazine hosted a happy hour panel that acted as a sort of primer on these meetings, the process, and why TxDOT is analyzing the options it is analyzing: a standard upgrade to the existing thoroughfare, the removal of some ramps, burying and decking the highway a la Woodall Rodgers, and the highway’s outright removal.

Panelists included Miguel Solis, the executive director of the Coalition for a New Dallas, which was created by D founder Wick Allison and advocates for removal (D Magazine and the Coalition are independent, separate entities); Amber Sims, the founder of the nonprofit Imagine Freedom Institute who lives next to 345 and has worked extensively in South Dallas; and Patrick Kennedy, the Space Between Design Studio urban planner who got the city talking about tearing out the highway. D senior editor Peter Simek moderated. You can watch it below. Or read on. (Or both.)

The stage was pro-removal, but the focus was on detailing the process of I-345, from how it got built, how it affected the community, and why we’re talking about it today. The tension over its future exists because of its land use: the 1.4-mile elevated highway connects Central Expressway with I-45 but physically separates downtown from Deep Ellum. Removing it, advocates say, will free up an amount of land that’s about the size of Fair Park. But who owns the land? Where will the traffic go? How will it impact the surrounding community?

During the public meetings, the public had those questions but did not get those answers, Solis contended. As for the first part: the state owns the land, but the city controls it. Meaning the city could purchase that land from TxDOT, establish priorities for the land use, and encourage development that would meet its goals. Like adding affordable housing. It’s Sim City come to life, an opportunity to create a neighborhood that most municipalities don’t get. 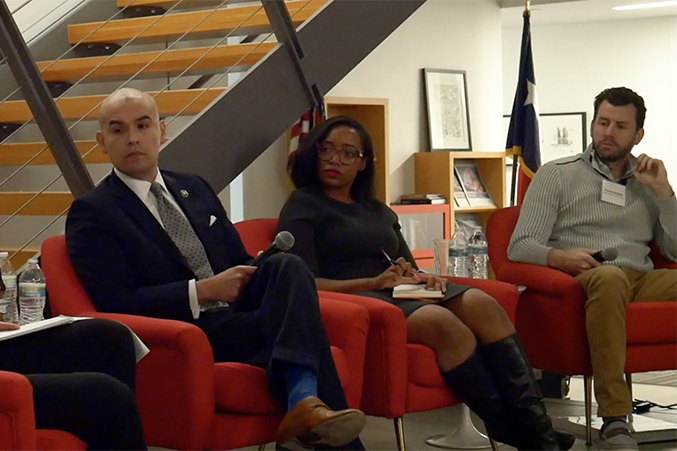 From left, Miguel Solis, executive director of the Coalition for a New Dallas; Amber Sims, the founder of the nonprofit Imagine Freedom Institute who lives next to 345 and has worked extensively in South Dallas; and Patrick Kennedy, the Space Between Design Studio urban planner who got the city talking about tearing out the highway.

The most common concern for removal is where the traffic will go. But how much traffic is there? TxDOT has said an average of 180,000 cars use I-345 each day. Where are those vehicles going? How many cars are using the freeway as a cut-through and could find alternate routes to get north?

Sims wanted to talk about the community. She grouped 345 with other freeways that damaged Dallas’ black neighborhoods during the Eisenhower era: particularly Central Expressway’s decimation of Short North Dallas and Interstate 35’s tearing apart of the 10th Street Historic District. She also spoke of how black homes were seized through eminent domain to make way for an expansion of Love Field airport in 1953, the same year that planning for I-345 began. It was built at the eastern edge of Deep Ellum, which was, at the time, a prominent black neighborhood. It opened to traffic in 1973. Sims said this history cannot be overlooked as the city and the state decide what to do with the freeway.

Kennedy gave a rundown of what we know about the traffic. For one, this information was described broadly in CityMAP, the state’s 30,000-foot-high study of what to do about the highways that crisscross the city’s core. The report’s first test was Interstate 30’s redo in the Canyon, which included a new boulevard, a lessened freeway footprint, and deck parks that would create connections between downtown to the Cedars. (The city will need to pay for those, however.) Its next test will be 345.

Kennedy noted that design consultants Kimley-Horn found that 38 percent of the traffic on I-345 is headed north on Central. About a quarter of it stops downtown. Ten percent heads east, and 21 percent use it to get to I-35E. How much of that can be diverted to other streets? Kennedy brought up nearby Riverfront, which also shoots people to the Medical District from points south. Could another lane accommodate the traffic that’s headed there?

“We need to parse that,” Kennedy said of TxDOT’s 180,000 number. “How many are getting on and then getting off? What is actually in the network?”

Solis referred to “getting the strawmen out of the way,” and to do that, it requires transparency and research. State Sen. Royce West, who is adamantly against removal, took the microphone at one of these meetings and noted that many residents in southern Dallas travel to the Medical District for their jobs. Do we know how many?

TxDOT’s approach is to kick off a long process with public opinion. Mo Bur, the top engineer for the Dallas district, told me the agency didn’t want to influence that opinion and so they took a step back and let people speak about how they use the freeway. He says they’ll be studying the very things that were brought up in our office: where people work, how it will affect the businesses and residents near the freeway, whether the surrounding grid and arterial streets have the capacity necessary to accommodate the traffic.

You can point to any number of freeway removals or experiments to see what happened. In Seattle, when the Alaskan Way viaduct was shut down for three weeks, the city saw a 10 percent decrease into cars heading into downtown. Oregon Gov. Tom McCall pushed to remove Harbor Drive, which was basically a highway ramp onto I-5, in 1974 and replace it with a park and a boulevard. Traffic found a way. Same with San Francisco’s Embarcadero and Seoul’s Cheonggyecheon.

There are differences, of course. Harbor Drive, for instance, shuttled just 24,000 vehicles a day. But anecdotal concern will be the hardest thing to push against, especially considering the inertia inherent in a project as long and complex as this one. Opinions change with time. At one point, Solis noted that the Coalition had polled all of the candidates for City Council about where they stood on the freeway’s future. Twelve of 15 proclaimed their support of removal. Council member Chad West laughed. “It is not the same now,” he said from the back of the room.

Dallas has never removed a highway. It will be incumbent upon the city and the stakeholders to extol what could be: there is economic development potential, but also environmental. The city, Kennedy noted, wants to reduce its emissions by 50 percent by 2050. Imagine if there weren’t as many cars idling on the highways.

West, North Oak Cliff’s representative, noted that his colleague Lee Kleinman, the head of the transportation committee, has scheduled briefings on TxDOT’s 345 meetings for the new year. But Kennedy noted just how much work there is to be done–meetings without information tend to frustrate those who attend.

“We have to advance things to a certain point with that input from the city of course,” Kennedy said, “but until we have that information for the public to react to, they have to have that or we aren’t really having a conversation at all.”

TxDOT sent its stance on these public meetings, which you can find below:

Trump Will Be in Dallas To Ruin Your Afternoon Commute