So long to the funky igloo building on Zang: it was destroyed in a fire last week, freeing the way for more apartments on land belonging to the restaurant group that owns El Fenix. The former home of the Polar Bear Ice Cream Company has been on Preservation Dallas’ list of the city’s most endangered buildings since 2016. It’s stood there, just south of Colorado, since the 1930s, when it was a hole-in-the-wall burger joint targeted at Lake Cliff Park back when it was a busy amusement park. Since 2014, when the Tex-Mex restaurant that called it home shuttered, it has looked as if it’s been slowly sinking into the earth.

It was wind-damaged and covered in graffiti. Last Thursday night, a fire gutted most of the inside and spat flames out of its roof and ventilation ducts. Jason Evans, a Dallas Fire Rescue spokesman says it took fire fighters about 30 minutes to get the flames under control. 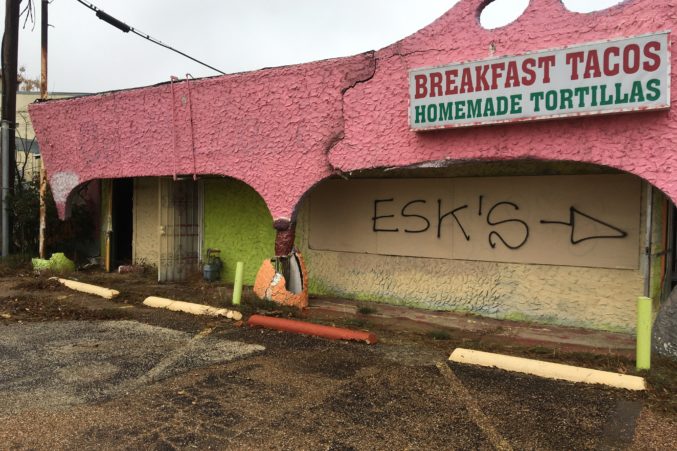 The igloo building was badly damaged in a fire. (Photo by Matt Goodman)

He says the fire started near the rear of the building and spread through the attic before they made their way out onto the roof. No one was injured. There were no witnesses. The ceiling mostly collapsed, which torpedoed any hope of an investigation. Evans says the cause will be listed as undetermined. Last week, the building’s doors were flung open, some windows had been bursted out, and most of the duct work was scattered in the interior. Anyone was welcome to walk in and poke around.

According to Preservation Dallas, city staff listed the building as one of four in North Oak Cliff that warranted a landmark designation. That never came—and the land is zoned for up to an 8-story mixed use project.