Dallas is a city built for drivers at the expense of pedestrians. It doesn’t keep either safe.

Relative to population, the city ranks fifth worst in the nation for pedestrian fatalities. It’s also fifth worst for traffic deaths. In 2017, two people died on Dallas streets every week. Among those fatalities were 46 people on foot and one on a bike.

“Unacceptable,” said Dallas transportation chief Michael Rogers on Wednesday, repeating the word on just about every stat he offered the City Council.

Dallas may soon craft a major plan to combat the lopsided numbers over the next decade. Rogers briefed a receptive Council on the prospect of joining Vision Zero, a strategy to eliminate traffic deaths and severe injuries while making mobility better, safer, and more equitable, and with a lot of thought for people who don’t travel by car. Right now, 40 American cities have signed on to Vision Zero, including Austin and San Antonio.

Pending Council’s future OK, city staff will craft a plan to join, identifying how it would reduce traffic deaths to zero and cut severe injuries in half by 2030. Rogers’ staff also recommended establishing a Vision Zero Task Force comprised of city staff, the general public, and Council members.

“Design around pedestrian walkways is key for this city to grow into the 21st century,” said Council member Paula Blackmon, of East Dallas.

At Vision Zero’s core is the tenet that human error happens and that better design can anticipate those errors and mitigate damage. Dallas’ move toward the system earned verbal support from each Council member who spoke on Wednesday, perhaps encapsulating a shifting public opinion in the way we approach driver and pedestrian safety.

This Patrick Kennedy piece from 2015 displays that old and new thinking in color. People have for too long focused on personal failings, yelling at the public to be better about wearing seatbelts and adhering to speed limits and paying attention. All are good ideas. But Vision Zero cuts victim blaming and stops pretending we’re going to entirely weed out bad habits. It instead addresses how design impacts safety and encourages safer driving.

“We’re all cut from the same genetic cloth and in groups, like an entire city trying to get around, will behave predictably dependent upon contextual factors,” wrote Kennedy.

Wider roads encourage faster driving. Certain crosswalks fail to properly signal drivers to slow. Certain bike paths offer little protection to cyclists. When the data show injuries and fatalities piling up, it’s time to go back to the drawing board. 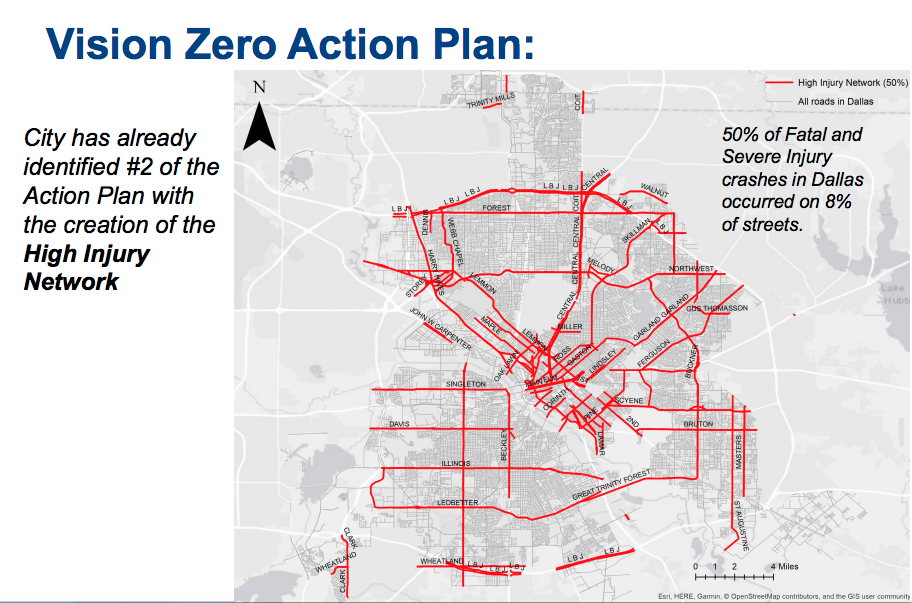 The red roads are home to half the city’s fatal and severe injuries.

As Rogers put it to the Council on Wednesday as he answered a question from Pleasant Grove Council member Jaime Resendez: “We have a lot of data about those accidents, so now it’s coming back and making sure those designs take into account those accidents.”

The good news: the city has already implemented a couple programs that can slide into our Vision Zero strategy. Through the 2016-initiated Complete Streets program, for instance, the city identifies neighborhoods where the design of a road has fractured walkability. Lower Greenville is the program’s most visible success story, and more recently, it’s taking on Henderson Avenue.

From there, staff will identify intersections, corridors, and other areas where the metrics say crashes keep happening, and invest in areas of high fatalities and severe injuries. Already, the city has developed the High Injury Network, showing that half of Dallas’ fatal and severe injuries occur on just 8 percent of city streets. That network will help identify where infrastructure improvements and engineer studies go and where police stake out for speeders, in so far as they have the resources to do so.

More good news: Vision Zero appears to work. San Antonio and Austin have each made strides in reducing pedestrian deaths. In Los Angeles, Vision Zero motivated city leaders to approve “scramble” crosswalks that flooded the streets with pedestrians from all directions—even diagonally—and slowed the traffic around them down. L.A. began modifying speeds on 80 miles of streets that saw high pedestrian fatalities. That’s the type of thing Dallas can do, now that it knows where people are dying.

According to the city’s timeline, its Vision Zero plan won’t come together until December 2021. But on Wednesday, Dallas got a little closer to becoming safer for pedestrians and drivers alike.