Dallasites who commute or live near Henderson Avenue, between Central Expressway and Ross, will be familiar with the recent onset of construction. The craters are a little too close for comfort along one westbound stretch of the road. Reasonable minds could assume the city is doing routine street work on a badly potholed thoroughfare. What they’re actually seeing is the result of years of planning—your 2012 bond dollars finally coming to life with an aim to slow the flow of traffic and make the area more walkable.

By February 2020, the city will install curbs that “bump-out” further, add parallel parking, improve the cracked and broken sidewalks, add new sidewalks, repaint, and put in a new stoplight at the pedestrian nightmare that is the intersection of Henderson and Willis, outside the Old Monk. It’s the latest iteration in Dallas’ “complete streets” program, which counts Lowest Greenville as its greatest achievement.

Cities have long emphasized traffic flow at the detriment of pedestrians, but Lowest Greenville became foot-friendly through city improvements that widened sidewalks, took four lanes of traffic down to two, added parallel parking, and installed touches like decorative pavement that signal to drivers they’re in a pedestrian realm.

Henderson is tricky in part because of the more limited right of way, which means the city won’t be able to widen the sidewalks in many portions of the project. Bike lanes, mulled over, were also axed due to space. But the city hopes to spur more foot traffic by repaving sidewalks that had long ago fallen into disrepair and by closing mostly unexplained blatant gaps in paving. Parallel parking will be protected by curb “bump-outs.” That will reduce the width of the traffic lanes considerably, slowing traffic.

Although you’ll be hard-pressed to find opposition to boosting the area’s walkability, one neighborhood group is concerned about what the added parking will mean for traffic flow. Meg Moschetto—who heads the neighborhood association for Cochran Heights, which abuts Henderson to the south—says her group is concerned about the repercussions of narrowing the lanes such that cars won’t be able to get around people stopping to turn left. “Slow is great. Slow is what we want. But not backup,” she says. “If the cars are backed up, what they’re going to do is pull off and go into the back streets.”

The city says parking was top of mind for residents at community meetings. According to surveys taken at one meeting, more people (32 percent) marked “lack of parking” as their top concern than any other category, although it was close—29 percent said speeding traffic and 26 percent said pavement conditions. Still, Moschetto says staff did not accurately synthesize local concerns voiced during discussions at those meetings.

And at least some business owners view the changes favorably. 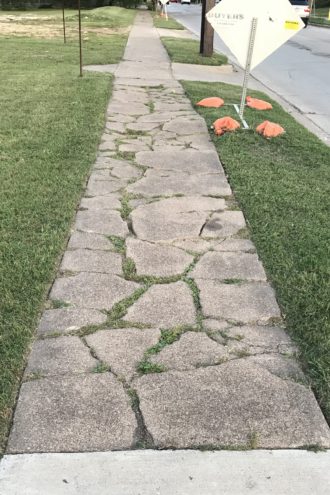 “The business owners I have spoken with are excited for the changes, a more pedestrian friendly, safer and more attractive street,” Feargal McKinney, who owns Old Monk as well as The Skellig, further east on Henderson, said in an email.

Nobody has had a better view of the area’s failings than McKinney, who has witnessed several wrecks and near misses through the years outside the Monk. Public Works program manager Haytham Hassan says a new streetlight there, at Willis and Henderson, is as much about pedestrians as it is drivers. The city will later reassess whether it needs to add an arrow for eastbound drivers on Henderson turning left onto Willis.

“I am thrilled beyond belief,” says Leigh Richter, who manages the eclectic Potter Square block of real estate between Central and Willis, encompassing the trendy restaurant Smithy, Vintage Martini, and Consignment Heaven, among others.

But Councilman Philip Kingston, who shepherded the project through with the help of colleague Adam Medrano, points out the high tenant turnover of that stretch. Restaurants and bars, in particular, have had trouble lasting. “I would anticipate seeing the landlords who are there either reinvest in their own stuff or flip it to somebody who will do something more appropriate,” he says.

And then there’s the slice of Henderson further down the road toward Ross, which is on the cusp of some even more drastic change. An under-construction, multi-story Irish bar called Jack & Ginger’s, imported from Austin, will open later this year—joining McKinney’s establishments as well as Irish-adjacent Capitol Pub in what is apparently the Irish corridor (“Little Ireland,” as a colleague put it).

But the most drastic change will come in the form of a 156,000-square-foot development between Glencoe Street and McMillan Avenue. Open Realty Advisors’ Mark Masinter won a hard-fought battle to develop the land last year. His plans for it have emphasized walkability. The Dallas Morning News wrote that Masinter “persuaded the council and a majority of surrounding neighbors … that the area has the best chance of becoming Dallas’ premier walkable neighborhood.” But the zoning case surfaced staunch neighborhood opposition from neighbors who claimed Masinter wanted “to turn the area into Plano.”

In Kingston’s eyes, the complete street project aligns Henderson to be “radically more pedestrian friendly and thus retail friendly.” The trick will be doing so without losing the feel of the neighborhood.