He found the plans on the internet in the early days of the world wide web, back when Ken Starr was investigating President Clinton.

A sailboat, 56 feet long. Technically a ketch because it would have two masts.

In late 1998, in a warehouse in East Dallas, Jim Benge laid the oak ribs, prepping them for the marine-grade plywood that would form the hull. Off and on for the next 21 years—the longest relationship of his life, the twice-divorced Benge will tell you—he would toil at night and on the weekends, creating a 20-ton blue water vessel capable of sailing anywhere in the world. The Whitmar, he called her, named for his only child, Whitney, and his mother Margie.

On September 21, a humid afternoon 21 years later, the Whitmar was ready to leave her dry dock, a metal warehouse near Buckner Boulevard. After a short set by country troubadour Ed Burleson and a blessing by a preacher, a crowd of 200 watched as the vessel began her slow exit from the landlocked building where she had been conceived.

That’s when the screech of metal ripped through the hot afternoon. The Whitmar was stuck.

A lot of people in Dallas think of Benge as a contractor. His company specializes in constructing high-end restaurants, places with craft cocktails and fusion menus. But if you see the Whitmar in person, you realize he is as much an artist as a builder. He decided to construct the craft after realizing that all his time was spent working on other people’s visions or hanging out in bars. The boat represented a challenge, a way to use a lifetime of skills. But more than that, Benge says, the project was “something for me.”

The lines of the craft are svelte, her textures luxurious—dark wood and polished steel, quartz countertops the color of cream, a utilitarian but sensuous melding of function and design. She’s all the more impressive when you consider that she was built from scratch by one man, with only occasional help when components were too large or heavy.

Once she’s transported to the coast, the Whitmar will have her keel attached, a 13,000-pound lead wedge sitting on a trailer outside the warehouse. The masts need to be installed as well, and there are a few other end-stage items requiring attention. Other than that, the Whitmar is ready to set sail.

The crowd, fueled up on keg beer and barbecue, is growing restless. Benge grabs a mic and thanks everyone for coming. He asks for patience and tells them there’s plenty of beer left. Ed Burleson plays another set. 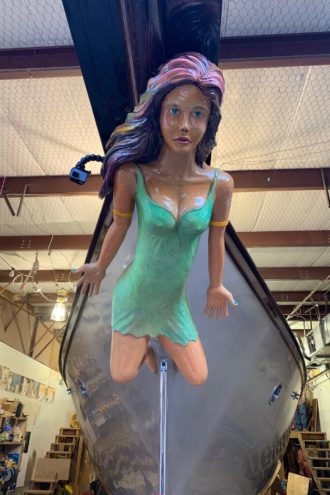 The front of the Whitmar features this figure. (Photo by Harry Hunsicker)

Since the craft is partially out of the warehouse—maybe 10 feet of the bow is exposed—the crowd’s attention focuses on the figurehead mounted under the bowsprit. It’s a woman, one of Neptune’s wooden angels, in the seafaring parlance of centuries past. It was carved by Grand Prairie artist Jorge Diaz, the paint scheme added later by one of Benge’s former girlfriends.

She is perhaps the most striking element of the afternoon, even more so than the spectacle of a 40,000-pound sailing vessel crowning from a dingy metal building. She’s roughly three-quarters the size of an adult, wearing a short, sleeveless aquamarine dress with a plunging neckline. Her hair is dark brown with purple highlights, flowing behind her like the trade winds are blowing across the ocean. She looks out, knees splayed, bent slightly as if ready to jump forward into whatever adventure may come. She is beguiling and frightening all at once.

The afternoon drags on into the early evening. People leave but more arrive, friends and various subcontractors of the Benge Construction Company, acquaintances and family members, people who’ve followed Jim’s grand adventure on Facebook or his website.

The boat rests on a wheeled wooden cradle that sits on what is essentially an extra wide railroad track. One end of a thick metal cable is hitched to the craft, the other connected to the winch that will pull the vessel out. The front of the warehouse has been dismantled, the only way the craft can be removed. The beam of the Whitmar, her width, is more than 14 feet.

The problem is that one of the wheels on the wooden cradle has broken.

In the warehouse, men with hydraulic jacks and welding equipment scurry about. Outside, Benge glides through the crowd, beer in hand, assuring everyone that the delay will be short. Music plays and people drink. Despite the heat and the lack of progress, everyone seems to be having a good time.

Amid whoops of congratulations, the Whitmar makes her full appearance. It’s after 8 p.m. The crowd has diminished, but not the enthusiasm.

Benge smiles, savoring a moment two decades in the making.