Not long after Dallas wrapped up its most murderous month since the 1990s, Dallas Police Chief U. Reneé Hall took up state officials on an offer to help. But nearly seven weeks since the deployment of state troopers, the district’s councilman, Adam Bazaldua, wants the troopers gone. On Thursday, Bazaldua said the tactics fit into a long line of divisive police tactics that breed fear between cops and communities of color.

The numbers are staggering: in seven weeks, troopers have pulled over 12,500 people. That’s something like 255 a day. Community members say they feel targeted. Meanwhile, the Texas Department of Public Safety touts 71 confiscated firearms. In a release Thursday afternoon, DPD also said troopers have made 400 arrests and seized 37 pounds of marijuana, a half-pound of meth, and 1.5 pounds of cocaine. Police say violent crime in the area has fallen 29 percent since the effort began. Murder and robbery remain up 33 and 34 percent respectively over last year.

“I am now asking that DPS move their troopers from South Dallas and get back to the drawing board with DPD to determine where our added resources will be better served, and I would like to be a part of that conversation,” Bazaldua says.

After the May murder and violent crime spike, Dallas police identified eight zones of highly concentrated violent crime. Bazaldua says DPS deployed first and heaviest in the Central Scyene zone, which is in South Dallas and surrounding communities. He says it took several weeks to get troopers to move the enforcement beyond that area. At last update, he says, troopers had visited four of the eight zones, three of which touch his district.

The vast majority of the stops—nearly 12,000 of them, DPS told the Dallas Morning News—end in warnings. That raises further concern for Bazaldua, who says he’d rather the city return the focus to community policing. He says state police haven’t offered help outside the traffic stops. “To the best of my knowledge, they have offered the troops and essentially have given us an ultimatum that they are here to help us on their terms or they’re not here to help us,” he says.

He’s been ensured “DPS and DPD are at the drawing board right now.” Residents made their discontent known at a Tuesday night meeting at the Martin Luther King, Jr. Community Center in South Dallas.

Chief Hall will apparently be involved in the decision-making. Bazaldua says. The chief, who is currently on medical leave from the department, has been “responsive and on top of the situation.” She accepted the offer to bring in state police at the urging of Mayor Eric Johnson. At his June 17 inauguration, Johnson said he’d been in touch with DPS head Steve McCraw and been told the department “stands ready” to help. He encouraged Hall to bring in outsiders. That was seven weeks ago. 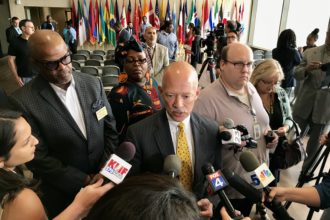 Creuzot spoke in front of a large crowd of TV cameras and print reporters. He stopped short of saying that the troopers should up and leave. What Dallas needs instead, Creuzot says, is a “recalculation.”

“Pulling people over for expired plates is not going to get it done. A taillight out is not going to drive down the murder rate,” he says. “That’s the point. Once again the community is frustrated and they need to be listened to.”

Creuzot has a list of reforms targeted at reducing the justice system’s disproportionate impact on people of color. He’s taken heat for it from Dallas Police Association President Mike Mata and many others. Here, you have a black community once again feeling discriminated against by police. “That’s nothing new in policing in America,” says Creuzot.

He declined to summarize the offenses that have made it to his office because they are still under investigation but said that justifying the police presence with 71 confiscated guns is a “non-starter.”

And he more than once brought up the impact on small business in South Dallas, as residents choose other routes to avoid stops. “I’d like to have DPA’s response to that,” he says. “Because so far I haven’t had anybody come tell me that my reforms are closing businesses. It’d be nice to see what Mr. Mata has to say.”