A long-awaited pedestrian and cycling connection from Victory Park to the Design District appears to be moving forward. The plan’s brushstrokes date back at least to 2016, when a nonprofit called the Circuit Trail Conservancy unveiled a 50-mile cycling loop that would extend from just west of White Rock Lake south to the Great Trinity Forest. From there, it would take you to the Design District via the Trinity Strand Trail along the levee and back up through Oak Lawn along the Katy Trail, eventually meeting at the trailhead near White Rock.

We’ve written about many angles of the Loop, from the 17-mile Trinity Forest Spine Trail, the $20 million voters approved during the 2017 bond, and the questions the City Council had about funding for the whole project.

But one of the trickiest connections in the entire system is also one of its smallest. What’s known as the Hi Line Connector is just a one-mile stretch between booming Victory Park and the Design District, which are split apart by Interstate 35E and an elevated rail line. 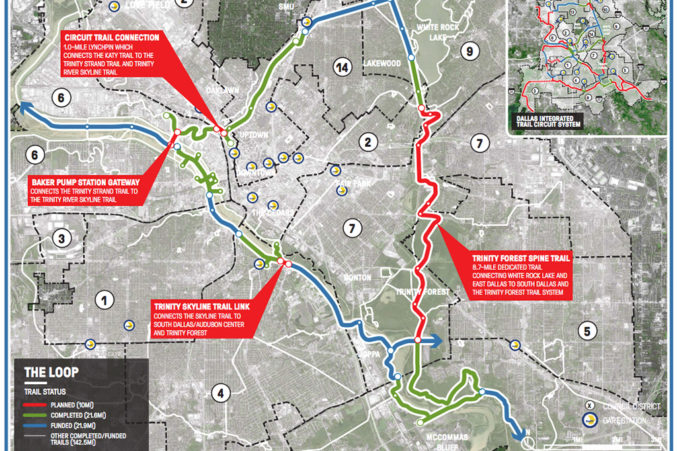 Despite being a smidgen of the total Loop, it will require more interaction with public right of way than any of the other planned 49 miles, according to Philip Hiatt Haigh, the Conservancy’s executive director. That includes some difficult, major pieces of infrastructure: the roads beneath both Interstate 35E and the elevated DART/TRE rail line as well as the enormous, busy intersection at Oak Lawn and Hi Line in the Design District.

The Conservancy envisions a bridge over Oak Lawn and slightly elevated lanes for cyclists and pedestrians below the freeway that would orient them away from cars. The project will cost at least $16.8 million, but the nonprofit is hoping to find additional dollars to add amenities. It would eat up just under half of the Loop’s expected cost, which will be at least $43 million. The Texas Department of Transportation’s CityMAP report once noted the Conservancy’s plan to shoot a pedestrian bridge over the freeway. They’ve switched gears to explore the best way to make it work underneath, which would include narrowing lanes and adding lighting and other pedestrian amenities.

“The highways are dead zones for activity, so this will be a really critical connection to show that, no, we’re not moving the highway, but what we can do is make passing underneath it a different experience from anywhere else we have,” Hiatt Haigh said. “This isn’t putting a parking lot under Woodall Rodgers, this is something you can get through. I wouldn’t say it’s going to be enjoyable, but it’s going to be something you don’t fear.”

The trail will begin at Victory Avenue and Houston Street. That’s where the Katy Trail currently cruises about 10 feet above Houston atop a retaining wall. (The Connector’s plan is to move the retaining wall back, put in stairs down to the street, and include a bicycle stairway for cyclists to ease their bikes down to the path.) Here’s what that looks like at present: 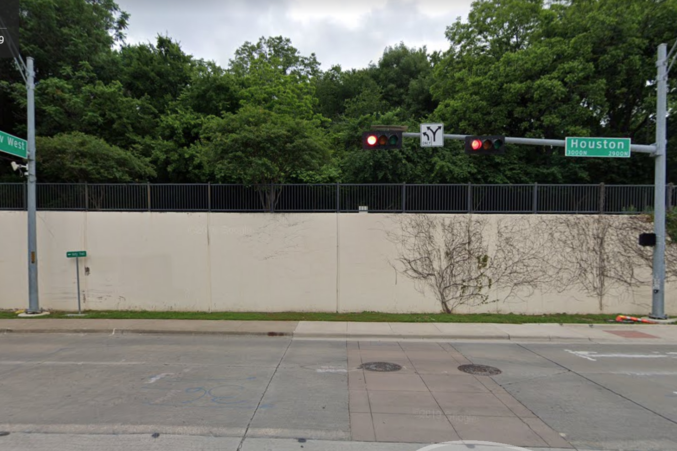 The Katy Trail sits above Houston and Victory, where the Hi Line Connector is planned to begin. Just imagine stairs down to the street.

And the rendering of what may one day be: 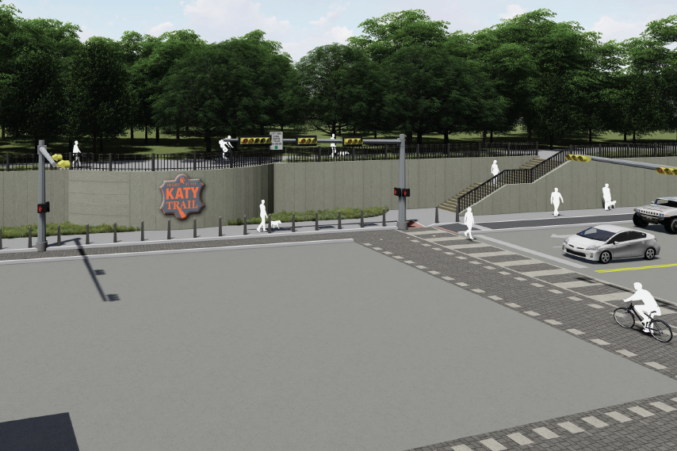 The path will follow east along Victory and head under Interstate 35 until the road turns into Hi Line. It will then snake through the Design District onward to the Trinity Strand Trail near the levees. The plans include converting the existing wide median along Hi Line into a trail. The bridge would then shoot pedestrians over Oak Lawn, but there would also be an at-grade path so that people could still access the bars and restaurants that now surround that intersection, like the Meddlesome Moth and Ascension Coffee. That intersection would be overhauled as well, with pavers and new signage and paint. The plan is to only close one street, Edison, which traffic studies show is only used by about 100 cars a day.

“We feel comfortable and the transportation department hasn’t said that we can’t do it yet,” Hiatt Haigh said.

Late last month, the Conservancy and its lead contractor, SWA Group, gave the first public briefing on their plans to the city’s Urban Design Peer Review Panel. That’s the group of engineers and designers that offers formal design advice to city staffers and to the city’s Tax Increment Financing District boards. The Conservancy hopes to capture some money from the Sports Arena TIF District in Victory Park to help offset some of the costs of redeveloping the areas near the American Airlines Center, in particular modifying that retaining wall.

In the meeting, the panel seemed encouraged by SWA’s proposal to slightly elevate the dedicated bike lanes that would run along Victory Avenue—a stark difference from the cheaper, painted-on lanes you often see around town that keep cyclists at arm’s length of the cars cruising past them. 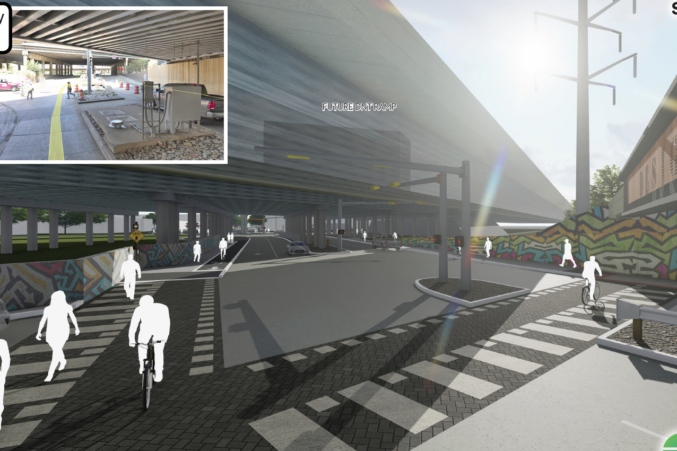 The Hi Line Connector going under the freeway into the Design District. (Courtesy the Circuit Trail Conservancy)

Intersections will get new, wider pedestrian crossings with updated signage, as well. And part of the plan is to slow down the vehicles exiting the interstate onto Hi Line and Victory. Hiatt Haigh and SWA hope that this will be a proof of concept for similar mobility projects in the city, to move away from painted-on bike lanes and toward something that adds a layer of protection for pedestrians.

“We’re substantially changing the model,” he says. “Once people start using it they’re going to demand it in their own community, that this is a much safer intersection or a better way to do a bike trail. That’s the way I want to feel when I’m using these amenities, so this one we’re definitely changing those public features more so than anywhere else.”

The design panel had the most questions about the bridge over Oak Lawn. The Conservancy doesn’t have the money to build a custom bridge. This one is planned to be partially pre-fabricated that can be attached to piers. The plan is then to wrap it in a custom metal cladding. The design panel was nervous about how heavy that would be, and asked SWA to adjust the aesthetic of the skin.

“We’re trying different models to see what looks best and also what we can afford,” Hiatt Haigh said. “That’s the balance.”

They’ll need to return to the design panel this summer before going after the TIF dollars. Hiatt Haigh hopes to get the project before the City Council this fall. But if you squint, you can start to see what could be—an easy connection point between two of Dallas’ most active neighborhoods, adjacent to Texas Trees’ transformation of the Southwestern Medical District nearby.