My 9-year-old Husky/Malamute mix, Chaco, was rescued from a puppy mill when he was around five. He was used for breeding, and was chained up most of his life. His front teeth are completely worn down from his efforts to chew through those chains. He has skin issues, which are a result of the mange he was found in. And he never stops pacing.

The rescue group we got him from, Samoyed Rescue of Texas, spent a year rehabilitating him. And then, for reasons I still don’t understand, they trusted us with him.

We are eternally grateful. Chaco is the most amazing dog. He has sad brown eyes, huge paws, and is often confused for a wolf. For some reason, a few months ago, he decided that strangers are more than okay, they’re great. He no longer hides from scratches; he demands them.

But his favorite place is on any trail that allows a little freedom and many, many smells.

So that has led my husband and I (and our pack: besides Chaco, we also have Reno and Ecco) on a path of exploring Dallas’ most dog-friendly trails. Below are Chaco’s favorite trails in Dallas. He understands that this list is by no means comprehensive, and would love to hear where you and your pups go to explore.

The second we stepped onto the trail at Windmill Hill Preserve, we knew we’d found something special. It’s a natural trail with trees everywhere. There is a creek, a red foot-bridge (called Stevie Ray Vaughn’s crossing), and dips, twists, and turns. The first portion is a bit of an incline and the sound of the street comes in through the trees. But then it veers left, deeper into a wooded area, and all the noise disappears (though we did still catch glimpses of houses along the path). Acquired by the county in 1993, the wooded trail can be treated as a loop or an out-and-back.

We went on a beautiful spring morning and ran into only one family and one couple. Windmill Hill Preserve was by far the most dog-friendly of the pack: there was a dog bag dispenser at the entrance. 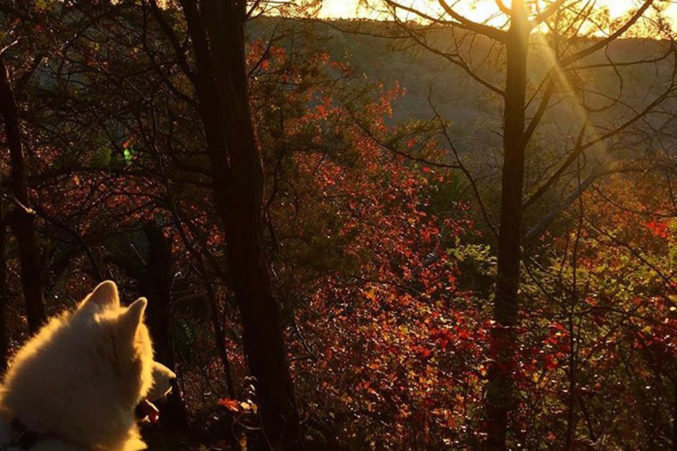 Koda stares out over the Cedar Ridge Trail. (Photo by Krista Nightengale)

We all know—and love—Cedar Ridge Nature Preserve, which is just a short 20-minute ride from downtown Dallas. But because we all know it, it tends to be quite crowded. The small paths teem with people training for cross country, getting in their morning hikes, and simply enjoying being in nature. It makes it difficult to add dogs into the mix. Ignore the main path and use the side trails, which are known as Escarpment, Bluebonnet, Mulberry, and Prairie trails. The views aren’t quite as impressive, but they’re still pretty great. They tend to be quieter, allowing our dogs to stop and smell the flowers as much as their hearts desire.

This stretch of trails gets all the attention for a failed attempt at creating a white-water rafting area in the Trinity River. Direct your attention instead to the concrete path that loops around. When it’s been raining for a few days, this is one of our go-tos. The path is a nice, easy loop that allows for some great views of downtown. This is also where the Trinity River returns to its natural contours (after the city tried to channel the River in the early 1900s), so it’s also one of the most beautiful parts of the river. 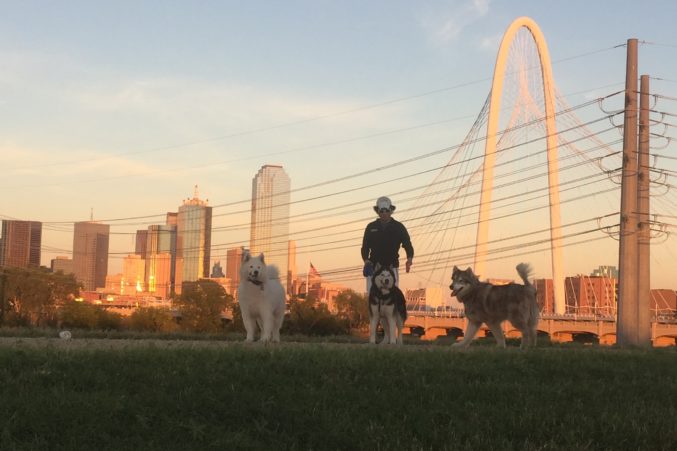 David Higbee with his pack on the Trinity Skyline Trail. (Photo by Krista Nightengale)

Our dear friend and fellow trail lover Bill Holston calls this area “nature on a leash.” And he is correct. It’s accessible, it’s easy, but it’s not exactly the most naturally beautiful. However, from here, we do get some of the best views of downtown Dallas, which leads to many photoshoots of our pack. The path is concrete and very wide, so it’s another decent option to explore after rains without the fear of being in the way. The wetland areas provide hours of smells for Chaco. We always like to end the walk with a stroll along the Ronald Kirk Bridge, where we know we’ll see someone who wants to give the pups a scratch.

Don’t let the treatment facility scare you away from this trail. It’s quite lovely. The concrete path veers through some wooded areas and can connect you all the way to the Trinity River Audubon Center. Along the way, there are plenty of benches and trash cans (which is a nice amenity when you have full dog bags). The paths are wide, so there’s space to share the trails with walkers and bicyclists (though, when we were on our walk, we ran into only two other people).

Not all the trails we visited made the cut, but they definitely deserve mention.

Northshore Trail and Boulder Park Trail were two we checked out. They are both managed by an incredible organization called DORBA, Dallas Off-Road Bicycle Association. They are a group of dedicated volunteers who clear paths and keep people up-to-date on whether or not the trails are open.

Northshore is a really great option, but it is heavily used by bicyclists and the path itself is very small. We spent the entire time looking behind us to see if anyone was coming, and then pulling our dogs off the trail so bicyclists could pass. It was stressful (but beautiful!).

We took our pack to Boulder Park Trail, and this was the only time we got lost. Truly lost. For at least 25 minutes. It was a magical moment in the middle of the city. However, while we walked around, we realized that most of the paths were very geared toward cyclists. I followed up with the admins after, and they recommended we not bring our dogs. However, if you have an off-road bike, definitely check it out!

Some things to note: 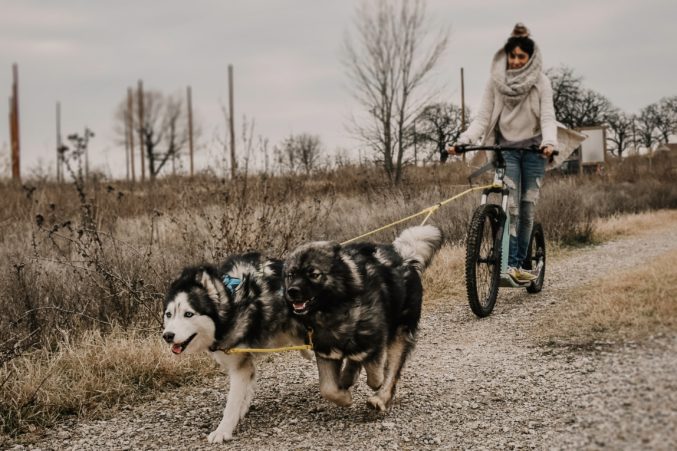 We may not live in an artic climate, but that doesn’t mean we can’t take our dogs mushing. Lisa Palacios got into mushing when she saw a group of folks doing it in Oklahoma. She met up with them, learned the ins and outs, bought a scooter, and can now be seen with her two huskies, Lucian and Anastasia, rolling through various trails around North Texas. The crew can get up to 20-25 miles per hour, meaning they need wide open spaces (with perhaps a turn or drop or two) and gravel or dirt so the dogs’ paws don’t get torn up.

Scenes From Yoga on the Bridge 2017

Envisioning The Trinity: Wild Dallas vs. the Status Quo