The verbal chippiness from the early mayoral runoff debates is fading as the final two candidates make their closing appeals to voters. Councilman Scott Griggs and state Rep. Eric Johnson spent their lunch hour on Wednesday seated next to one another appealing to a room of about 275 people at the Communities Foundation of Texas.

Their messages are now tailored and focused, and neither one is easily drawn offsides. (Notice I said verbal: before the debate, Johnson on Twitter urged Griggs supporters who are apparently jacking his yard signs to “#TryMe.”) Griggs wants to use the time he has to explain existing city policy, his role in passing it, and how it could be implemented further once he’s in office. Johnson wants you to know he feels he is a better consensus builder, using his nearly-decade long experience as a Democrat in a Republican-controlled legislature as evidence. That, and his bevy of endorsements from past mayors and sitting council members. He paints big pictures, and is hoping his leadership argument will convince voters to bet on him.

As was explained by moderator Crayton Webb, the former journalist who now heads Sunwest Communications, Dallas’ weak mayor system means the person in that seat will need to line up seven votes behind them to pass policy. Griggs argued that he’s worked within the system for eight years, as he helped usher in the city’s first housing policy and found the money in the general fund to raise starting cop salaries from $48,000 to $60,000. Johnson used his endorsement from seven sitting council members to illustrate their faith in him over their colleague, Griggs. (Griggs has support from five of his own.)

Johnson has beaten this theme like a punching bag since the two emerged out of the crowded race. He is looking to tie his opponent to a progressive bloc of the City Council—alongside which Griggs frequently votes, made up of colleagues he has advocated for—that has pushed hard against what they view as the status quo in operations at City Hall, particularly big-picture projects like the Trinity tollroad and privatizing Fair Park without putting it out to bid. The word “divisive” has come up so often in these forums that Griggs riffed on how even its pronunciation has split voters.

It seems more and more that your vote will be decided by your view of this narrative.

“People recognize based on my record everything I’ve gotten done over the last eight years,” Griggs said. “I’m not only a consensus builder, I’m a leader and a team player. That shows in the votes I’ve taken and the issues I’ve led.”

There are policy differences between the two men. Let’s start with police and fire. Griggs says we’re in a “public safety crisis,” noting poor response times, the loss of more than 700 officers since 2016, and the more than 30 murders that occurred in the city of Dallas this month alone. He said he’ll be able to reallocate money in the general fund to increase salaries and recruitment efforts without sacrificing parks or other services. Johnson doesn’t buy this and pushed his opponent to identify where he’d cut. Griggs used his past success in scrubbing the budget as evidence that he can do it. But to Johnson, the only way the city will get more money to first responders is if we grow our tax base, increase revenue, and be realistic about that fact. Johnson says this is why he didn’t win the endorsement of the top police and fire unions.

“We spend two-thirds of our general fund budget now on public safety. If you want to spend more on public safety, that’s your choice,” Johnson said, “but it means a library, it means a park, it means something that he doesn’t want to tell you it means. … The way forward is to grow us out of this situation by enhancing the tax base.”

“There is the money in the budget. It’s a $3.1 billion budget and a $1.3 billion general fund,” Griggs said. “You can absolutely find year after year between $16 and $20 million to reallocate. I’ve done it every year of the last eight years.” 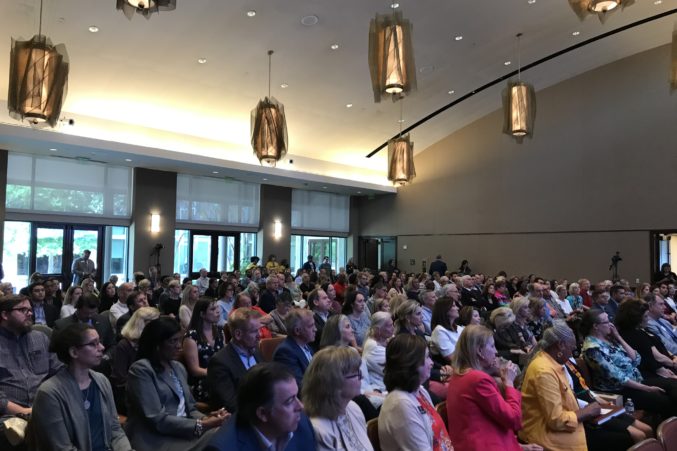 The debate crowd on Wednesday. (Photo by Jeff Kitner)

They seem a lot closer on affordable housing. Griggs gave a quick lecture about the housing policy. He was part of a City Council that helped shepherd in the first ever in the city’s history, which identified neighborhoods in need of improved infrastructure, those that needed policies to protect longtime residents from displacement, and others that were rife for more housing through mechanisms like inclusive zoning, in which the city would allow developers to build higher or denser if they allotted a certain amount of units to lower-income individuals. He also said the city should encourage development in federally-defined Opportunity Zones, which offers tax breaks to developers who build there. And he vowed to stop “using code compliance as a hammer,” and help low-income residents get grants to fix their homes.

“We’ve got the best programs, tools, and strategies from across the country, and as mayor on day one I’m ready to implement them to help with this affordable housing crisis,” Griggs said.

Johnson seemed to agree on most of these points. In fact, Johnson and Griggs co-authored a Dallas Morning News editorial in 2017 that advocated for freezing property tax values for longtime residents in booming neighborhoods like West Dallas who were at risk of being taxed out. Johnson even tried to get a state law passed that would reallocate TIF funds for affordable housing, another tenet of the shared editorial. He said the city needed to invest more in a housing trust fund to build units for low-income residents who qualify for vouchers

The two differed on the success of North Oak Cliff, which is part of the district Griggs represents. Griggs argued that Jefferson Avenue’s redevelopment was a successful use of planning and zoning; the city invested in infrastructure improvements like wider sidewalks and benches while not passing policies that would result in the closure of businesses. Johnson had a different view.

“I’m concerned about what has happened in North Oak Cliff,” Johnson said. “It is in many ways a success story, but in many ways, there would be people who say that has been an example of gentrification. There have been people who have been displaced as part of that development.”

Both men agree that incentives should be a tool that the city can use to lure new business. But Griggs said the city needed to hold incentives closer to its chest and require contingencies that benefit residents, like mandating from the company higher hourly wages and a certain percentage of jobs to Dallas residents. Johnson said the city should consider each on a “case by case basis,” but used this time to highlight his campaign focus on improving workforce development. He said this is the best way to “ween ourselves off” of incentives altogether. He noted that Austin got an Apple outpost without any incentives at all.

“They just want to be in Austin because that’s where the talent is,” Johnson said.

Both, however, say that the package City Hall offered Amazon went too far.

The candidates each voiced support for the reform initiatives at Dallas ISD, particularly the pairing with the community college district, UNT Dallas, local high schools, and getting students into early internships and fellowships at large, local companies. Their workforce development plans seem tailored around improving training for tech jobs, as well. Griggs also advocated for pre-K for all, and said the city and school district should be sharing library and recreation center space.

They touched briefly on improving walkability, with Griggs calling for dedicated bike lanes and wider sidewalks and Johnson citing his legislative advocacy for the re-do of the dangerous East Dallas intersection where Garland, Gaston, and Grand intersected, known as 3G. Johnson ended this portion by saying “we can do 3G projects all over the city.”

It was something of a microcosm of the two campaigns: Griggs, taking a microscope to broad policy issues, and Johnson, finding a big, physical example of where he believes Dallas should focus and expanding it throughout the city. Which way will better appeal to voters is anyone’s guess.

Early voting is underway now, and the election is on June 8.