Thousands of People Are Watching These Crayons Not Melt

This heat is making folks act out. People in Dallas are now melting all kinds of things outside.
By Alex Macon | July 27, 2017|1:29 pm
Advertisement

Update, 3:30 p.m.: The crayons did eventually melt, and it looked pretty cool. Meanwhile, every media outlet in town, including us, decided to start melting things on video. It was a hot day in Dallas. Details below.

I’ve spent the last 20 minutes, along with thousands of other people on the internet, watching a live video of crayons obstinately not melting, downtown Dallas in the background.

Whichever insane person at Channel 8 cooked up the idea of this Facebook live video — 6,000 viewers and counting as of 1:20 p.m. — deserves a raise. It’s an inspired and absurd art project. Shortly before 1 p.m., the video went live. A man set up a large sheet of paper on a stand, a row of Crayola crayons attached to its top. A thermometer ticks to its left. This is the caption with the video:

You’ve heard of frying eggs and baking cookies in this triple digit heat…what about crayon art? Let’s see how long it takes to create a melted work of art!

Maybe somebody at WFAA should have Googled “how hot for crayons to melt.” I did, and landed on Crayola’s website.

It’s hot in Dallas today. Just not quite that hot. We could be waiting a long time. Channel 8 ought to get chief meteorologist Pete Delkus on to discuss his doubts about climate change. That should kill some time.

At about 1:15 p.m., a man placed a clock to the right of the crayons. I’ll keep you posted on this developing story.

Update, 1:49 p.m.: Channel 8 is laying the groundwork to admit defeat and ask for a participation trophy. The video continues. The crayons have not melted.

Update, 2 p.m.: The stand fell over. The crayons have not melted.

Update, 2:08 p.m.: An hour and twenty minutes after this foolhardy experiment began, the video went dark. The crayons did not melt.

You’ve heard of frying eggs and baking cookies in this triple digit heat…what about crayon art? Let’s see how long it takes to create a melted work of art!WEATHER INFO: wfaa.com/weather

Update, 2:15 p.m.: They’re not done yet. A new video is up and running. The crayons and sheet have been moved to the ground, out of the high winds that earlier toppled this enterprise. There also now appears to be a tiny toy man’s head involved. The crayons have not melted.

Update, 3:05 p.m.: Channel 5 has joined the fray with its own live video, seeing how long it will take to bake chocolate chip cookies in a hot car. Which local media outlet will be the next to playfully investigate how triple-digit heat affects inanimate objects? The crayons have not melted.

Update, 3:09 p.m.: The crayons are actually melting, about two and a half hours after this thing got underway. 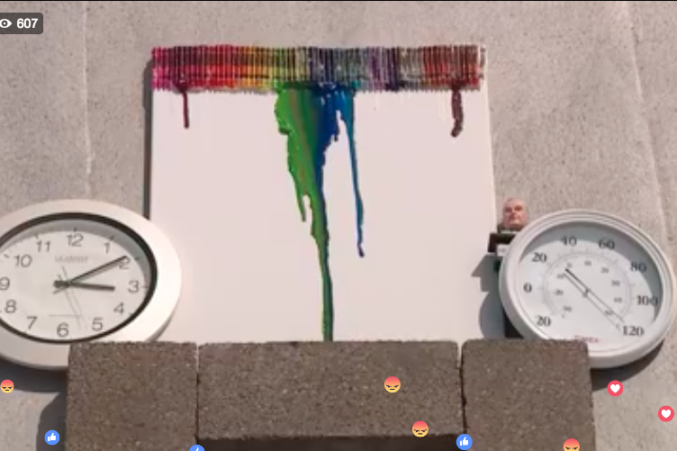 Update, 3:20 p.m.: Not to be outdone, The Dallas Morning News is melting chocolate, Texas-shaped butter, a paleta, and ice cream on a rooftop.

Update, 3:21 p.m.: D Magazine got in on the action and dumped some ice on the sidewalk. It’s real hot outside.