Over on Candy’s Dirt, Jon Anderson has a nice recap over yesterday’s Preston Center Task Force meeting. The group, which includes former Dallas Mayor Laura Miller, is charged with considering the potential for development in and around that southwest corner of the intersection of Northwest Highway and Preston Road.

Among the topics discussed at the Walnut Hill Recreation Center was parking. The task force had asked consultants to study the situation, as there existed a belief among some members that parking is often too difficult to find at the shopping center, despite a free, two-story, public garage that sits at its center. Here’s what they found: 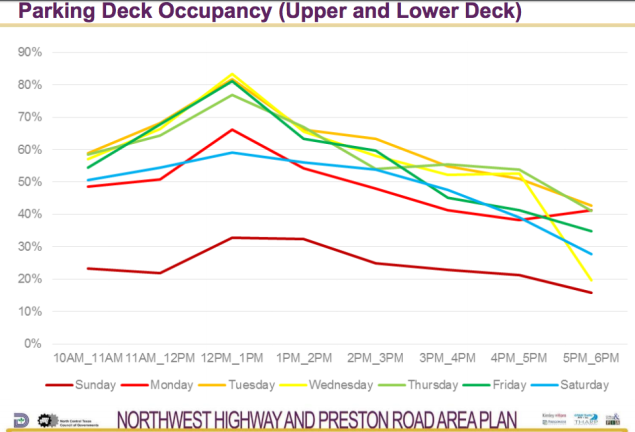 You can see that lunch time is when the most spaces are occupied, but even then things top out at just over 80 percent of capacity (on the parking deck, not counting the street parking that surrounds it) on weekdays. Most of the time there seem to be more than enough spaces available.

But, as Anderson notes, even this objective data proved unconvincing to some:

Parkers just need to abandon their dreams of winning the parking lottery and snagging the ONE PERFECT SPACE directly in front of Flying Fish’s front door at lunchtime. They need to resign themselves to parking in the tattered central garage, and — gasp! — walking a bit.

A lot of the lunch-bunch congestion is from those aforementioned parking lottery players circling the area like vultures, burning a gallon of gas instead of shoe leather.

Some of the not-so-quick task force members spent time questioning these results because they personally have a hard time finding parking at Preston Center at lunch. Really? One or two stories somehow outstrip the results of human beings spending a week charting and counting every car’s entry, exit and route in the various parking areas of Preston Center? If anecdotes carry the weight of facts, why hire the consultants?

Get out and walk, Dallas.