The Scoop: A Fancy Caviar Dinner and a Family Guy Themed Pop-Up Bar

The Drunken Clam pops up at The Whip:
This & That Concepts (High Fives, Tiny Victories, The Whip, Ferris Wheelers, Dibs on Victory) are opening a replica of Family Guy‘s, The Drunken Clam. The pop-up is open until Feburary 2. “We have some exciting plans for The Whip moving forward,” says Brandon Hays, This & That co-owner. “But we thought we’d have a little fun first by bringing The Drunken Clam to Dallas. Whether you’re a fan of the show or not, we think you’ll enjoy dropping by and checking out the pop-up bar along with drink specials, photo opportunities and more.” The Drunken Clam is open Wednesday through Saturday from 6 p.m. to 2 a.m.

Jalisco Norte has a new menu: Chef Jose Meza has rolled out a new menu in honor of the Mexican food restaurant’s one year anniversary. “We want to show people the other, less familiar side of Mexican cuisine,” says Meza. “It’s nuanced, but not complicated, and something everyone can enjoy. Our goal with the new menu at Jalisco Norte is to create a space where guests can experience and enjoy old and new Mexico.”

One of the first format changes is the new, De La Calle section, which offers street-food style dishes a la carte. The new section has familiar entrees such as tacos, tostadas and enchiladas in both simple and complex flavor combinations. Examples include the Tostada de Pata with pickled pig terrine, carrot coleslaw, Mexican oregano and chile powder and the Huitlacoche Quesadilla with corn truffle, epazote, tomato, onion and cheese.

The Mains section still serves as the hub for Meza’s use of native Mexican ingredients and techniques. Entree additions include Seared Scallops with squid ink chicharron, Baby Octopus with achiote oil and habanero jocoque sauce, a Pasilla Stew with plantain masa gnocchi and the vegetarian Grilled Cauliflower with verdalogas (purslane) noodles, recado negro, smoked cabbage and pickled vegetables, to name a few. Some familiar items from the previous menu have been peppered into new dishes such as chef Meza’s Chapulines, or grasshoppers, which can now be enjoyed as a side dish or an additive in the Guacamole.

Chef John Tesar and Michael Passmore are hosting a caviar dinner: Chef John Tesar and Michael Passmore, founder of Passmore Ranch, are hosting a special caviar and champagne dinner on January 11. The six-course tasting menu includes smoked salmon spring rolls, oysters, lobster, pasta with uni butter, prime Akaushi filet, and dessert. The dinner, which is limited to 20 people, takes place at Knife in Plano on Friday, January 11 at 7 p.m. The cost is $175 and an additional $100 for a champagne pairing. Call 214-299-5935 to reserve. 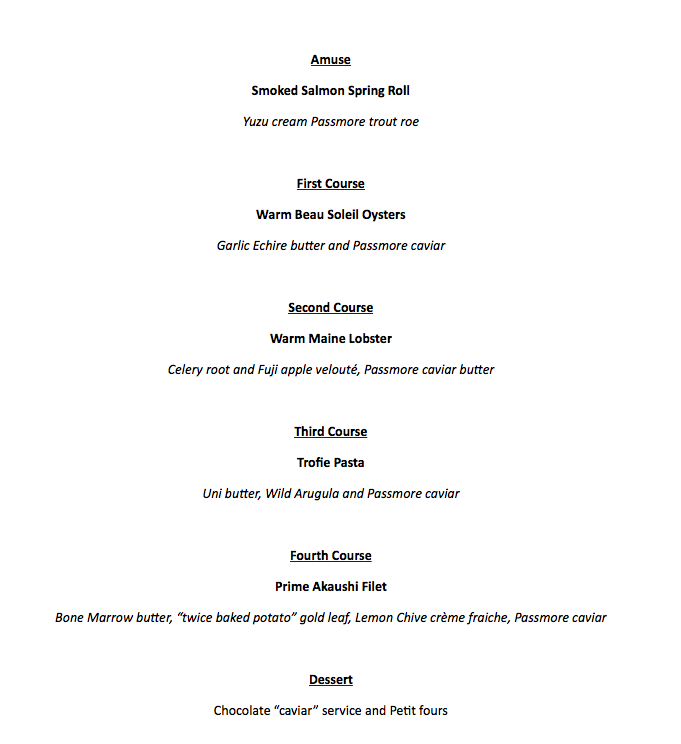