Creatively fitting a towering multifamily in a neighborhood like Victory Park required deep thought by international developer Hines and their team of architects and designers. The infill development of a former parking lot on the northeast corner of Nowitzki Way and Victory Park Lane, The Victor is now the tallest building in Dallas’ Uptown—and it’s garnering some of the highest rents in the area at about $370 a square foot. 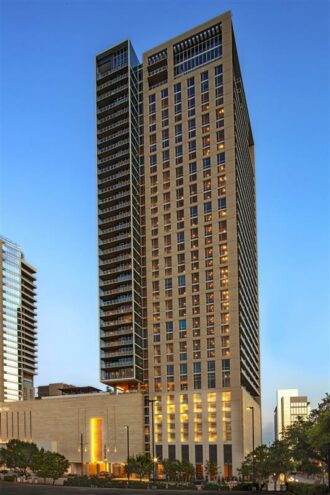 Typically, such a building would be long and rectangular, much like the high-rises you see in downtown Dallas. But such a design would crowd the neighborhood’s urban fabric, Munoz + Albin Principal Jorge Munoz tells me as we walk along Nowitzki Way to tour the site.

Comprised of 344 luxury residences and adjacent to the American Airlines Center, the 40-story tower blends beautifully into the neighborhood. To do so, designers broke the masing of the tower into two distinct shapes to accentuate its verticality: a thin floating glass volume on the east and a masonry volume on the west. The glass box hovers above the podium, and cantilevers on both north and south sides create an illusion that the volume defies gravity. The contrasting materials and separation of massing elements help heighten their overall perception. From the street below, the masonry form appears to tether the glass volume to the ground in a kinetic composition.

Setting the building further back and running an arcade along the front and a small greenspace at its Victory Avenue corner also help The Victor fit into the neighborhood. But one of the most interesting design elements, in my opinion, is the limestone-clad parking structure that sets a narrative of luxury living.

Inspired by its close proximity to Dallas’ Arts District, interior designer Kelie Mayfield, principal of  Mayfield & Ragni Studio (MaRS), says she took the luxury of Dallas and played off that when it came to finishing the building. “We wanted The Victor to feel like a high-end hotel. That sense of luxury is felt at arrival thanks to high-quality features such as a honeycomb-shaped installation running down the center front of the parking garage and across the ceiling of the porte-cochere to conceal all of the supports. It continues with an around-the-clock valet and concierge.

Mayfield says she approached the lobby of the property to also evoke a feeling of openness. The soothing color pallet and minimalist furniture help make it stylistically timeless yet locally grounded. Mayfield said the purpose was to allow the curated art peppered throughout to shine. That it does.

“The Victor’s site-specific art commissioned pieces are incredibly thoughtful and unique,” she says. “Most of the art is related to the storytelling about the project, and we commissioned amazingly talented artists from around the world to create these custom pieces and convey these stories.”

At the lobby entrance is one of the grandest pieces: a sculpture installation titled Stretch. The human statues made of steel and cast in resin and patina bronze stand between nine and 12 feet tall.

At the concierge’s desk is a piece by a London artist who specializes in hand carving fabric walls. The 16 by 12-foot suede piece is a real stunner.

Some of the artwork found in the 10,000 square-foot amenity room on the ninth floor includes nods to the Dallas Start with an installment made out of hockey picks and a Jordan Spieth portrait made with 61,500 bamboo golf t’s. The space is complete with an assortment of co-working and lounging spaces (including stadium seating in front of a wall of televisions), a pool table, poker, shuffleboard, and a very impressive simulated golf studio with a TrackMan golf simulator.

The pool and patio space include other activities such as cornhole; Viking ranges; and a pizza oven imported from Italy. A poolside 12-foot Olive tree is an unexpected nod to the former name of the street the property sits on.

A pet salon, bike shop, gym, and skyline terrace round out some of The Victor’s other amenities.

Condominium-level finishes are seen throughout the residential spaces, which range from 530 to 2,695 square feet. Floor-to-ceiling windows in most units offer sweeping views of Victory Park, downtown Dallas, Uptown, and Southern Dallas. Real hardwood floors, quartz countertops, and Italian-made custom cabinetry are seen throughout the apartments. The building’s 18 penthouses (on the top three floors) range from 1,595 to 2,696 square feet with up to three bedrooms and flex space.

The property is managed by Willowick Residential (a management company under Hines’ umbrella and a nod to its first residential development).

Up next? Hines has already started work on its next Dallas residential tower: a 22-story apartment building to be constructed next to Uptown’s landmark Maple Terrace building.