For the most part, uncertainty still grips most commercial real estate sectors. Industrial has been different. It has held up well during this Covid recession and even continues to expand – hence my allusion to C.W. McCall’s hit song from the mid-1970s. 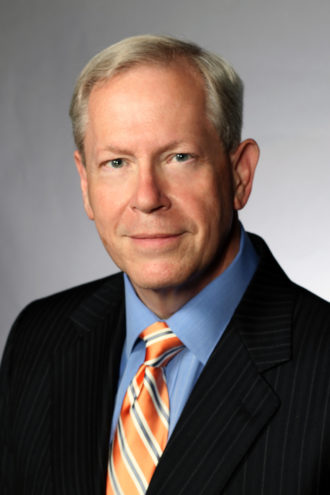 It should not be a surprise that DFW has been at the center of this somewhat quiet boom. Year-end 2020 numbers and the industrial sector dynamics have been remarkably stable. To get the numbers out of the way, vacancy ticked up to 8.1 percent from 7.7 percent in the third quarter. This is due to many deliveries hitting the market in the last half of the year against slightly slower demand compared to the first half of 2020.

Importantly, overall vacancy is still well below DFW’s longer-term average and the high points hit during past economic downturns. In fact, we are far from the soft conditions we saw back in the last two recessions.

This is also an important take-away – demand for industrial space is close to an all-time high.

As we track DFW, we had 20 million square feet of absorption through year-end. That’s a great number when put against our annual average of around 18 million square feet during our most recent expansion. Looking back over 2020, industrial leasing stayed stable despite some ebbs and flows during the quarters as companies worked to figure out the shifts taking place. Overall, market-wide leasing activity is down maybe 7 percent to 8 percent from the ultra-fast market we saw in 2018 and 2019. 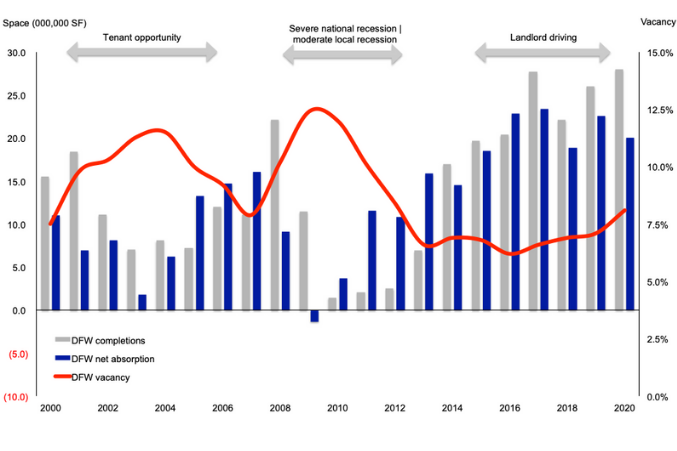 Last fall, Mark Zandi of Moody’s Analytics noted in a webcast that he would be shy of investing in commercial real estate – except for perhaps industrial. He went on to note that he’d be cautious there because even in industrial, it mattered “if you’re in a gateway city or not, given the disruptions in global trade.”

While we think of gateway industrial locations being the major U.S ports, I’d be so bold to expand Mark’s observation to include key logistics hubs, where goods are moved into and through locations to serve the US. DFW falls squarely into this category.

From a purely scale standpoint, at 7.7 million people, DFW is a top-4 U.S. metro area by size. This means our region generates almost unmatched “local” demand for goods to serve our population’s needs. As we look at the high demand segments recently, it is e-commerce, furnishings, food-related consumables, and the like.

DFW’s strength comes from more than this local demand – and that is exactly where we believe in the continuity and consistency of our industrial sector!

DFW is uniquely located. In a big way, we are at a crossroads that make us a distribution hub for the entire middle of the U.S. Goods arrive in DFW from both coasts and points south and are moved throughout the U.S. due to our strong national transportation system that includes highway, rail, and air. With average rents of $5.80 per square foot, according to CoStar, DFW is affordable compared to $7.50-plus in the Inland Empire and north of $11.00 in LA. This is another reason why we are on almost everyone’s want-to-be or need-to-be location lists.

Our DFW outlook is quite positive. In fact, we see vacancy moving slightly lower over the next 12 to 18 months. Why is that?

Well, a large share of space now under construction is already spoken for either to lease or own. That implies minimal overbuilding risk, which was DFW’s biggest challenge in the past. In addition, to keep the “Convoy” allusion going – with no “smokies” insight – the ongoing strong demand, especially from larger users, has no sign of slowing. That factor, combined with a more even pace in construction starts, makes it hard to not see a positive sector outlook through 2021, despite commercial real estate uncertainty elsewhere.

While I wouldn’t suggest it’s time to “put the hammer down,” it is time to just “let them truckers roll.” “So keep the bugs off your glass and the bears off your tail…we’ll catch you on the flip flop”, next quarter.

Walt Bialas is a senior partner with Goodwin Advisors.