Enjoy unlimited access to all of our incredible journalism, in print and digital.
Subscribe Now
Advertisement
CRE Opinion

Stream Realty Partners exec J.J. Leonard says the third quarter saw 1.5 million square feet of negative absorption—the worst since the dot-com bust. But it's gaining momentum.
By J.J. Leonard | December 2, 2020|1:20 pm
Advertisement
Now that we’ve wrapped up the second full quarter in which COVID-19 impacted the global and national economies, the Dallas Office Market statistics have begun to reflect the changes brought on by the pandemic. The three most notable areas affected to date are absorption, sublease space, and market vacancy rates, each of which will be examined in greater detail below.

One bright spot for the Dallas Office Market is that leasing activity gradually picked-up steam from early to mid-September. Inquiries have turned into tours–most of which have been in-person–and tours have turned into proposals, and then in some cases, those have advanced to leases.

In a few instances across Stream’s Dallas office portfolio, deals that were put on hold or opted for short-term extensions in March and April, when the pandemic hit, have been resurrected.

The Dallas-Fort Worth vacancy rate across all classes climbed from 16.5 percent in the second quarter to 17.5 percent in the third quarter. Class A space was the primary culprit, as it jumped from 16.7 to 17.9 percent. To translate that into square footage totals, the DFW office market’s existing total supply equals just under 230 million square feet, 148.5 million of which is Class A space.

In the third quarter alone, approximately 2.3 million square feet of total vacancy–of which 1.7 million square feet was Class A vacancy–was added to the supply set. Peeling back the layers further, two factors contributed to this vacancy rise: New deliveries and absorption (or lack thereof). 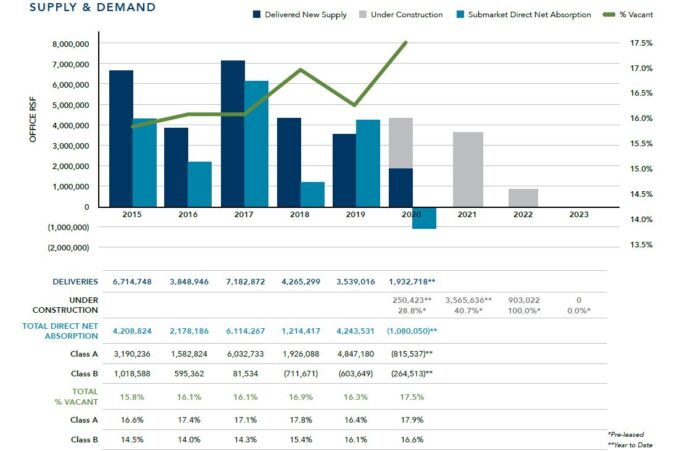 As is often pointed out in Stream’s Quarter report, absorption is counted once a tenant moves out of office space (negative) and/or into new office space (complimentary). The typical average lag period between signed leases and positive absorption occurring is approximately six months.

One very interesting and not often discussed anomaly resulting from the pandemic and recent shift to a work-from-home environment is that the first-quarter 2020 leasing activity, which was very robust, has not translated into positive net absorption for the third quarter.

A large driver behind this phenomenon is that if a tenant does not move into their new space, irrespective of whether the lease commenced, the absorption is not counted until the move-in date.

If these companies are not planning on occupying their space until early 2021 or later, the absorption will not be factored in until such time. Hopefully, this helps jump-start the rebound we expect to see during 2021.

Finally, a major focal point of discussion is the amount of sublease space hitting the market since the pandemic.

Historically, the average sublease space on the market during the past five years of the recovery has been approximately 5.1 million square feet.

The unknown is what percentage of the sublease space added to the market results from companies with no intention of returning to their office during their remaining lease term versus companies who are temporarily working from home and simply testing the sublease market to see if they can right-size their space post-pandemic. Regardless, Stream will be closely monitoring the amount of sublease space available and subleasing activity monthly.

Though the initial DFW office market numbers reflecting the pandemic’s impact are grim, and this remains an unprecedented time of market uncertainty, one thing that’s for certain is that DFW will remain a great place to live and work.

Many thought leadership pieces have been written on how the DFW area will come out of the pandemic with an even brighter future than it already had. This, of course, bodes well for the office market, and Stream has no doubt the DFW office market will rebound, and when it does, it will do so in a big way.