AT&T, one of Dallas-Fort Worth’s largest employers with roughly 16,000 employees, has acquired the historic Interurban Building at 1500 Jackson St. The property sits next to AT&T’s massive campus in downtown Dallas. The seller was Barker & Nichols, a privately held, Dallas-based company.

News of the sale was delivered to residents of the former Dallas train station via written notice on Jan. 8, stating that ownership would change hands on Jan. 10. The notice indicated that all current rental contracts would remain in effect. 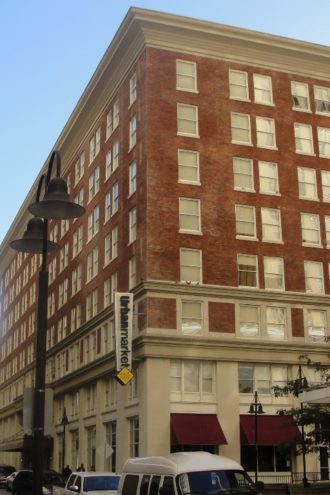 The Interurban Building on Jackson St.
Courtesy of the City of Dallas

A representative at Greystar’s Dallas office, current management company for the Interurban Building, confirmed AT&T as the buyer. He said that although the company has not laid out specific plans for the future, AT&T intends to maintain residential uses for now, and is excited to incorporate the historic building as part of its Discovery District, which is under construction.

Greystar will remain the management company for the time being.

According to records from the Dallas Public Library, Stone & Webster Traction Interests built the Interurban Building in 1916 to accommodate 35 interurban trains servicing a fledgling Dallas. The building later became the office for Trailways Bus Co. in the early 1950s until Greyhound bought Trailways in 1987 and the building was vacated. In 2000, Courtland Group bought the building, with plans to redevelop it for office uses. The project didn’t pan out, and Barker & Nichols bought the building, refashioning the space for residential and retail use.

In response to our request for comment, an AT&T spokesperson had this to say: “We continue to invest in our Dallas campus and decided that purchasing the Interurban building would best suit our employees’ parking needs. Current residents should experience little to no impact.”