Dr. Jessica Gomez is the newly appointed executive director of Momentous Institute, an organization that promotes the social emotional health of children in Dallas. In her new role, Dr. Gomez focuses on fostering healthy and equitable communities as a means of addressing pediatric mental health. 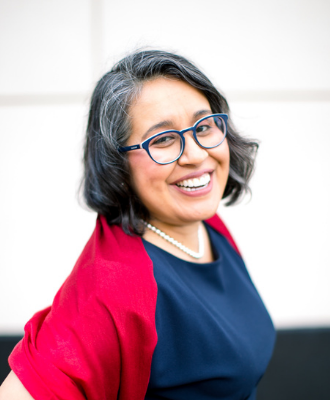 Below, she shares how having walked the walk of those in the community she serves, experiencing life as a first-generation Mexican-American woman and overcoming odds, has helped her lead in a way that is inclusive, empathetic, and resilient.

Born into a Community of Beauty and Risk

“I am a first-generation American, born and raised in the Southside of Chicago. Both of my parents emigrated from Mexico and gravitated to Chicago as a huge epicenter of diversity, cultural enclaves, and robust Mexican community.

“The neighborhood I lived in on the Southside of Chicago is known for the many diverse leaders that have come from it, as well as its rich history and culture. I remember walking to the playground, and there were always people playing and connecting. There were people from so many parts of the world there. There was a rich abundance of every ethnic group and community: Polish, Lithuanian, African American, Mexican. That was the reality of my world up to the fifth grade.

“Although there was a lot of beauty in the Southside of Chicago, there was also a lot of normative community violence. I attended a private Catholic school while in Chicago because my parents were afraid of some of the risks of attending Chicago’s public schools, including joining a gang. As a psychologist, I think back and realize that some of the city’s violence became part of my norm. There was beauty but there were also real risks and fears.”

The Prejudices of White Suburbia

“We moved to the suburbs when I was in the fifth grade because my parents weren’t able to continue paying for the school I was in. Luckily, my parents received career opportunities that allowed us to move. We were very excited for the new opportunities, but sad to leave the community of the Southside of Chicago. When we moved neighborhoods, one of the first things that stuck out to me was that no one would talk to me. I would go outside and no one would speak to us. I didn’t realize why until an African American family that lived across the street from us said ‘It’s pretty prejudiced here.’ So, we banded together.

“That transition to better schools, better opportunities, and less community violence was so pivotal in my life because of the loneliness I encountered from being different. Shifting from a community where I felt supported, included, and invited, to one where I felt isolated, caused some significant anxiety and depression. I knew I was Mexican my entire life, I just didn’t know it was a bad thing in the eyes of some people until I had to move away from the Southside.

“I remember going shopping with my father one day and someone walked by and called us very derogatory and racist names. I wanted to jump out of the car to and confront them as a sixth grader. My father said, ‘Calm down, mija. Let’s talk about what it’s going to be like for you to navigate this world, given how you look.’”

“I’ve built a career based on leaps. From going to college, to getting a master’s degree and doctorate, I have overcome underestimations. Part of these underestimations is that we haven’t seen enough diverse women in these roles. Every time an opportunity has been made available, it wasn’t from someone knocking at my door. There haven’t been enough women of color in positions of leadership, demonstrating having overcome odds. Until women of color start to take leaps as leaders, and let little girls and boys grow up seeing us in these rolls, it is hard for our community to imagine what we can overcome.

“I wonder if culture also plays a role in underestimations. I am Mexican. Part of the Latino culture gives me a lot of strength and so many qualities of who I am as a leader. At the same time, Mexican women are traditionally taught to not have a loud voice, to be respectful and quiet. Those qualities are not conducive to leadership and are elements of the culture I have personally had to to un-learn. It’s a double-edged sword. I would not want to be anything other than Latina. But when I speak up and have an opinion, that doesn’t mean it comes naturally.”

“It wasn’t until I became a psychologist that I realized that being multilingual is a strength. I grew up with my grandparents helping raise us, and I learned Spanish to communicate with them. From elementary school all the way through college, I was evaluated for a learning disorder because I ‘spoke funny.’ I eventually was assessed, and contrary to [the school’s] expectations, the test found that I was gifted. There is a misconception around being a bilingual child and speaking two languages. Our brains just work differently.

“When I went to college, I didn’t look like anyone else. I was the only Latina there. I was the only person from the working class. Most students were wealthy second or third-generation clinicians. In graduate school, a professor said, ‘You don’t write like an [English] native.’ I ran down to the counselor’s office and said, ‘I’m not going to make it. I don’t speak like them. I don’t look like them. And now this professor saying, I don’t write like them.’

“Eventually, I came to understand that professor didn’t know how to work with multilingual students, how our brains work, or how we write. Now, when I work with children who are bilingual, I tell parents to nurture their second language, ‘It’s going to help them become better at math, reading, and critical thinking,’ I say. There’s so much shame around speaking Spanish or any other language. It took me until I was well into my 30s to realize that my bilingualism was actually a strength.”

“Isolation, racism, and discrimination take a toll on anyone’s mental health and manifests as [everything from] trauma, to anxiety, to depression. This is why it is important to make sure people feel connected in community and not ‘othered.’

“We all need that one person in our lives, that one neighbor, that one family, that one school counselor. Throughout my career of leaps, there has always been someone out there who has been a champion for me, that wanted to pour into me, and saw something in me that maybe I still didn’t even see in myself. Mentorship is so important, despite education or a professional career, you never know if you might be that one person for that one child.”

“It’s different talking about DEI when you have had the first-hand experience of living through DEI issues. You cannot replicate experience through education. It helps, but there is an unparalleled level of understanding having walked the walk. When people with diverse experiences who reflect the community make decisions, they consider how it might affect people who have similar walks.

“My role as the first Latina to lead Momentous Institute is a huge responsibility and a huge opportunity. I hope that there’s someone out there who can see themselves in me and is inspired by possibility. I know I needed to see such inspiration as a child. I see myself as a bridge builder for the community through teaching that mental health is something we all need, not just people who struggle with it, we all need it to thrive.

“My path has been lonely. I once told a mentor of mine ‘I’m tired.’ He used a road trip from Dallas to Chicago as a lesson for me. He said, ‘Most people just hop in their car and drive to Chicago. But it seems to me that you have had to clear the land, build the road and then drive. Of course, you are going to be tired. You have had to trail blaze some of these things.’ That experience has humbled me. Today, when I sit with people across from me who are trying to overcome huge obstacles, whether poverty, health issues, mental health issues, or citizenship, I have deep compassion. I listen in a different way because I can relate to some of it.”

“If we’re really going to create inclusive, equitable and diverse communities, agencies or workplaces, we need to be realistic and expect these changes to be tough and conversations to be uncomfortable. We all have our own work to do around it, each one of us—some more than others. We all have to be willing to be comfortably uncomfortable. If we’re expecting to be comfortable having these conversations, then we’re missing the beat. It’s going to be uncomfortable for all of us because many of us hold some sort of privilege.

“You need to rest and take care of yourself, when you’re going to do this work, it is not a sprint, it is a marathon. With that, we need realistic expectations of time—the time it will take for these sustainable DEI changes to take place. It’s almost like a therapeutic process: a process of us reckoning, speaking truth, healing and building relationships with each other, a process that takes time. We need patience as we move these changes in the DEI climate, which is hard when there’s real suffering in the world.”

”When you look at thriving communities or cities, the number one contributing factor is diversity. When we invite and embrace diversity in those communities, there is so much success and growth. We know it, and the science shows us that the research. I think about the community I was born in in Chicago. What makes it so strong entrepreneurially is the fact that it has all of these cultural enclaves of people from all parts of the world.

“I see Dallas shifting into having courageous and uncomfortable conversations. Conversations around how there is a difference in our community and how some of our neighbors live, or disparities that a side of town lives in—all from a nonjudgmental and solution-focused standpoint.”

Momentous Institute Will Hang in There Without Byron Nelson Tournament