Construction is underway on what will become the Dallas’ largest urban park. The city’s Parks & Recreation department kicked off construction yesterday of Carpenter Park, a 5.6-acre green space connecting downtown with Deep Ellum and East Dallas.

The park, a revamp of Carpenter Plaza, which opened in 1981, is bounded by Live Oak Street and Pacific Avenue, extending up to North Cesar Chavez Boulevard. The new green space will feature a play area for dogs, a basketball court, an interactive fountain, a playscape for children, gardens, and walking paths.

Visitors to Carpenter Park will also have the chance to see a reconceptualized version of Robert Irwin’s sculpture called Portal Park Slice, as well as a Robert Berks statue of John W. Carpenter. 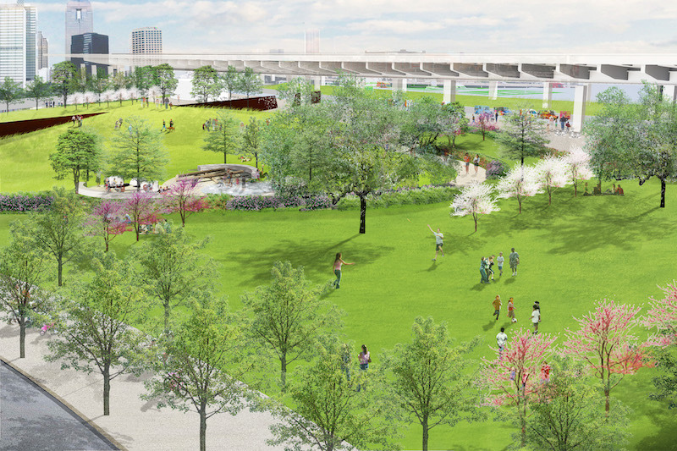 Landscape architecture firm Hargreaves Jones led the design team for the new park, which is the third of four planned downtown parks to be constructed.

“The Carpenter Park groundbreaking is the culmination of nearly a decade of planning by Dallas Park & Recreation, Parks for Downtown Dallas, and numerous other agencies, institutions, and residents,” said Amy M. Meadows, president and CEO of Parks for Downtown Dallas. “When this park reopens in 2022, it will be an accessible community asset that serves as a vibrant connection point.”

Landscape architecture firm Hargreaves Jones led the design team for the new park, which is the third of four planned downtown parks to be constructed.

“It has been our great privilege to be a part of the greening of Dallas for the past 20 years and the realization of the vision for new downtown parks to make the city’s urban core a more desirable place to live, work and play,” said Mary Margaret Jones, the firm’s president and CEO. “As the largest of the downtown parks, it will be a place for everyone—with something for all to see, do, and experience.”