Last week, Dallas artist Vicki Meek’s Stony the Road We Trod opened in what was the Nasher gift shop. The installation will be up through February 14.

Meek has been a force for three decades. An engrossing work, a temporary installation as part of the Nasher Public series that launched last October, presents an altar or a shrine to Black life. Its symbolism and messages are derived from Yoruba cosmology, Ghanian Akindra symbols, and other references. The work explores the spirit of her African ancestry, a way of examining what remains despite more recent history.

“A lot of people think about African Americans, and of course they start the story with enslavement. And my thing is, we were people before we were enslaved. And that stuff doesn’t disappear. I mean, it gets muted, in ways,” Meek says. “I do see African Americans as being like a hybrid African tribe. But there are so many things that still exist if you bother to excavate that history.”

Nasher associate curator Leigh Arnold approached Meek last summer to ask her about doing a site-specific piece. Meek had said she wasn’t going to create installations anymore. Which is why, she says with a chuckle, you never say “never.”

She was drawn to this project in part because there were no strings attached. She had complete freedom to fill the space.

“Because of the time, I felt like, okay, this is the perfect time for me to do something that can address my connection to the time, and to be in a space that fits with my whole philosophy on art,” she says, which is that it should exist in the public eye. “So I said, ‘Yes.’ … I immediately started thinking of doing this shrine to the Black community, because of the times that we’re facing.”

The piece is running in conjunction with a retrospective of her work that is currently on view at the African American Museum in Fair Park.

In the space at the Nasher, a carved Mende helmet greets you upon entering. It is sitting on a dais, surrounded by objects symbolic of an African past. This is a reliquary of sorts, a shrine that occupies what was the Nasher gift shop. A card invites you to write an affirmation, fold it, and add it to bamboo baskets on marble chips that form a moat around the centerpiece.

“My work is very much research-based in the sense that I am doing things that are not just about a particular social topic, but oftentimes I’m also looking back at ways that we go further back and connect through our ancestral philosophical base—and much of that is spiritual,” Meek says.

Meek knows a thing or two about the symbols and rhetoric associated with the African American race dialogue. She earned her MFA at the University of Wisconsin, Madison, which she calls “the Whitest place in the world.” In the 1960s, the university was a hotbed of civil rights activism. By 1971, when Meek arrived on campus, the administration had purged the campus of “most of the so-called radical element,” she says. “And I had gone to that school because of the radical element.”

It was a blow.

On the campus of 3,500 students, about 800 were Black, she recalls. Not all of them were African American, but rather a mix of African and Caribbean as well. Not all were involved in the political agenda and its inherent struggle. “So it was a very lonely experience in terms of what I was used to,” she said.

In Philadelphia, where she grew up, her father ran a cultural center with an art gallery, and Meek was exposed to Black artists. 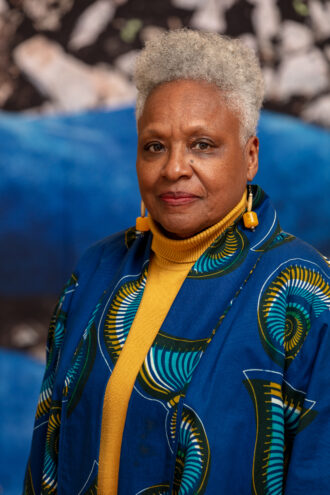 In Madison, she pursued sculpture, “which was very White and very male.” But her idol, Elizabeth Catlett, was a female sculptor and printmaker, “so I was gonna be a sculptor,” Meek says. And a professor in the nascent African American Studies department, in which she took a class on African American art, introduced her to the National Conference of Artists. Founded in 1959, it was the only national organization for Black artists in the country at the time. She met artists like Romare Bearden and Catlett at its annual gathering.

“That kind of connection during the height of the Black art movement just affirmed that I was fine. I didn’t care about what my professors were saying about the validity of what I was doing,” she says. “It secured me in pursuing the aesthetic that I wanted to pursue.”

They gave her courage to stand her ground and pursue her aesthetic vision.

“I was doing very overtly political work,” she says of her work in the 80s. “And I can trace it directly back to when I had my first child,” a a time of discovery and new impetus. “There was a certain humanizing that happened that had me really beginning to accept what I was really trying to say, and what I was trying to get across to people when they saw the work.

“And I realized that what I wanted them to do was to feel,” she says. “And the best way to get people to feel about something is to tap into their emotions and their spirituality.” (She has created memorial rooms, in which the explicit aim is to open a space for such feeling.)

A retrospective over more than 30 years, the exhibit, which opened in Houston at the Houston Museum of African American Culture in November 2019, moved to the African American Museum at Fair Park last October. It will run through March 1. There, you’ll find pieces that run through Meek’s themes of race, historical memory, and activism in primarily two-dimensional, mixed-media, series-based work that has dealt with everything from slave-ship logs to contemporary appearance and evince connections to some of the discreet imagery and symbols in Stony the Road We Trod.

“That’s when I began to start exploring the way in which traditional African art, which was never about art—they didn’t have a word for art—was making things that connected to the spiritual.”

So began her exploration of that notion of art-making. In this exhibit at the Nasher, she employs elements she has used repeatedly in her work, only situating them anew.

The room is awash in blue, the color of protection. The blue of the roosters’ feet are symbols of the ancestors. Blue of the plinth curtains shelter the Mende mask. Blue of the ribbons tie it to its base. Blue is the frame of the photographs, one of which shows blue-shod feet, a visualization of progress. Audio of her gently humming “Lift Ev’ry Voice and Sing” suffuses the space, which is awash in her murmuring of this anthem. She derived the show’s title from the song’s second verse, which she believes outlines the African American experience and journey, its harrowing history, and promise of hope.

“I easily could have done something way more political in-your-face, but to me, this is the best statement I can make about Black Lives Matter—the most significant thing I could say about my feelings about why Black lives matter,” she says.

Her retrospective at Fair Park features mostly two-dimensional mixed-media work that often runs in series and has dealt with topics more incendiary over the course of a prolific and percussive career. Stony the Road We Trod remains staunchly ancestral, plumbing depths instead of surfaces.

“My ancestors are absolutely the shoulders I stand on,” she says. “They are absolutely who have given me the strength to do everything I want to do, have done. And I really believe that when you know your history, you know your ancestral connections, you can’t be anything but strong.”

“In this case, it really is about creating a healing space, a shrine,” so that people can come and reflect without “a particular political conversation going on,” but instead “a conversation about the spirit—and how it is indeed the spirit that has lifted us and kept us moving through terrible times in this country. And yet we still keep rising.”

She hopes to offer a more historically-grounded entry-point to “all the [current-event] hot spots … the brutality and murders … that ultimately are about ‘Are we seeing each other as human beings?’ Because if you constantly are looking at other people from the humanist standpoint, you can’t harbor those kinds of feelings.”

Everything she does is about being solidly rooted in culture.

“I’m simply talking about the need to be grounded in one’s culture to persevere, and not just persevere but thrive,” she says.

It’s a vast message housed in a small space. A gentle, humanist one about tenacity, resilience, and continuity.

On the exhibit’s opening day, two men stood looking at the work. After introducing herself, she asked what they thought. One of the two told her he evinced a sense of comfort, she recalls. “And I said, ‘Well, then, I did my job.’”

Meek brings herself to this show, which is both deeply felt and cerebral. A viewer may grasp the sense of a soothing balm. Which is why she’ll keep creating, making art: making spaces.