Yesterday, a Dallasite named Josh Smith started a petition for Mayor Eric Johnson and the Omni Dallas to get the city-owned hotel to display ‘Black Lives Matter’ on its massive LED facade. The 23-story tall screens are prominent and dynamic pieces of the Dallas skyline, typically used to cheer on sports teams or display advertisements. The hotel has been praised for showing solidarity throughout the pandemic by sharing messages like “WASH YOUR HANDS” and “THANK YOU NURSES.”

Smith and thousands of other Dallasites want the Omni to bring that same energy to the fight against systemic racism and police brutality.

The petition, which you can read and sign here, is heading toward 7,000 signatures as I type this. I’m sure that number will continue to climb, and it doesn’t seem so unlikely that the hotel will make this vision a reality. After all, its famous neighbor, Reunion Tower, went dark this week for the second time ever to support #BlackOutTuesday.

This isn’t the first time that someone has proposed that the Omni Dallas use its massive platform to send more urgent messages. When I heard about the petition, I immediately thought of a piece by the artist Jonathan Molina-Garcia that I saw at Allison Klion’s ex ovo gallery last fall. That piece is called “Omni Hack,” and it’s a scale model of the hotel, complete with a mini LED system that spells out “BLACK LIVES MATTER,” “BOTHAM,” and “ATATIANA.”

Molina-Garcia conceived of the piece in 2016, a few months after the police shootings in downtown Dallas.

TODAY ex ovo will be open from noon until 8pm so you can see @pupusahands’s Omni Hack Prototype 1 at its most mimetic.

“I was fascinated with the sort of semantic landscape that was part of the city after the shootings. You know, all the ‘Back the Blue’ signs, ‘Blue Lives Matter.’ It was sort of impossible to get away from that,” the artist says. “So, the counter movement that happened, I think, was also a diminishment of the visibility of Black Lives Matter, as a sign, as a message.

“So, it was seeing all these billboards, then encountering the Black Lives Matter sign that was outside of an automotive shop on their LED structure. It was just this tiny, small sign that I saw everyday on my way to work, sandwiched between all these normal, everyday advertisements. I started fantasizing about monumentalizing this very small act of protest…It seemed natural to put it on Dallas’ biggest screen.”

The likelihood of the Omni Dallas yielding its platform to the Black Lives Matter movement seemed slim at the time. “I’m making a model, essentially because I knew that it couldn’t be real, never quite anticipating the severity of civic reaction and disobedience,” he says.

But as Molina-Garcia’s fantasy begins to veer toward reality, the artist has some additional concerns about how the hotel should back up the words “Black Lives Matter” if it were to say them. 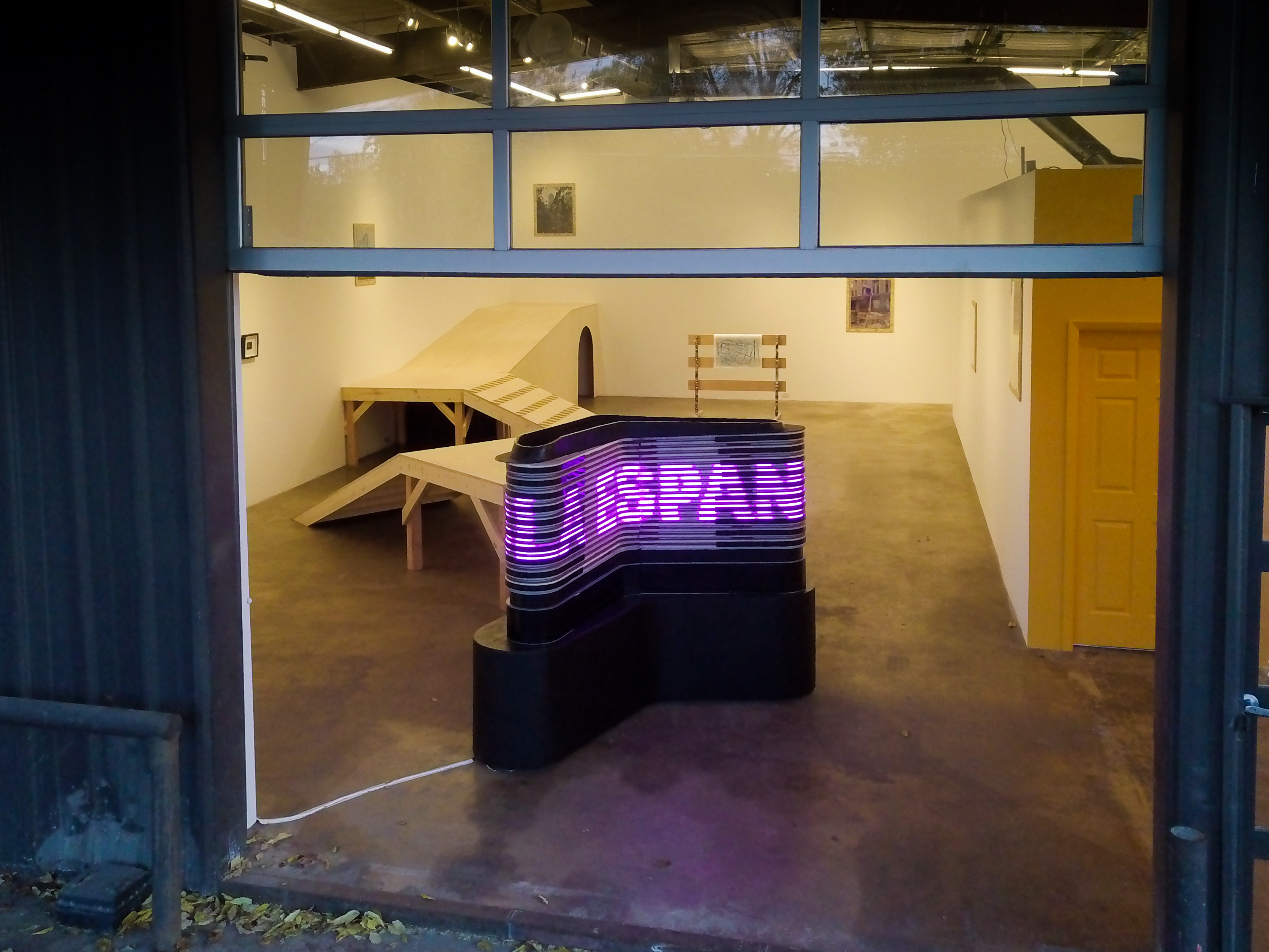 “Omni Hack” as installed at ex ovo for the exhibit Next Exit. Photo by Trey Burns.

While the petition hopes to “change the morale and the mood of the city,” Molina-Garcia hopes that the statement would be done out of bereavement and become an opportunity for the city to properly grieve. While the words are powerful, they need to be accompanied by actions to have a real effect.

“As far as whether it could happen now, I mean, yes. I have a lot of reservations about it. I think, if they’re going to do it, I hope they come up with something more symbolic, or even more performative. It shouldn’t be a flat sign or an advertisement…To just have the sign on the facade is putting too much responsibility on the text to accomplish everything, and it really needs context,” he says. “What if there was a parade of cops in the Omni foyer doing a kneeling protest with activists from Black Lives Matter while the sign is in the back? It feels like a great opportunity to assert additional actions.”

With the community’s response to police violence over the past five days, Molina-Garcia is thinking even bigger.

“And why stop at Black Lives Matter?” he asked. “It could say ‘Defund Police,’ it could say ‘Demilitarize.’ These have become two important concepts for reforming practices within police.”