In the middle of the Dallas Arts District, crammed into the Wyly’s cavernous Studio Theatre, you will find a small slice of Pleasant Grove. Playwright Jonathan Norton has recreated a central hub of his childhood for Penny Candy, a bracing dark comedy that serves as a love letter to the neighborhood where he grew up. In Paw-Paw’s Candy Tree, a snack shop run by a father and his 12-year-old son out of their apartment, we watch a community unfold, and eventually unravel.

The year is 1988 and Pleasant Grove is beginning to fall into the grips of epidemic drug use, drug-fueled gang violence, and ineffective law enforcement. But within the dingy walls of the candy house, 12-year-old Jon-Jon spends his time mixing snowcone concoctions and sneaking sips of his dad’s beer. The shop is a home base for the neighborhood, and Jon-Jon’s parents, Dubba J and Laura Mae, are the gatekeepers. With violence moving closer and closer to their front door, the family is torn between their safety and their community.

“It really resonates to me in terms of the sense of a very tight knit community that is quickly coming apart at the seams,” says Norton. “And just in general, the idea of Pleasant Grove itself being this hidden part of the city that’s normally not recognized and when it is, it’s recognized for the wrong reasons.”

Norton was about the same age as Jon-Jon during the time in which the play is set. He says he remembers local figures like County Commissioner John Wiley Price and former Councilwoman Diane Ragsdale, but he had to dive back into Dallas history to paint a complete picture. It was then that he learned of forgotten pieces like the police killings of Etta Collins and David Horton, two elderly black residents of South Dallas. He references these incidents in the dialogue, as well as lighthearted tidbits of life in Dallas in the ‘80s, like shopping at Levine’s and eating Grandy’s. 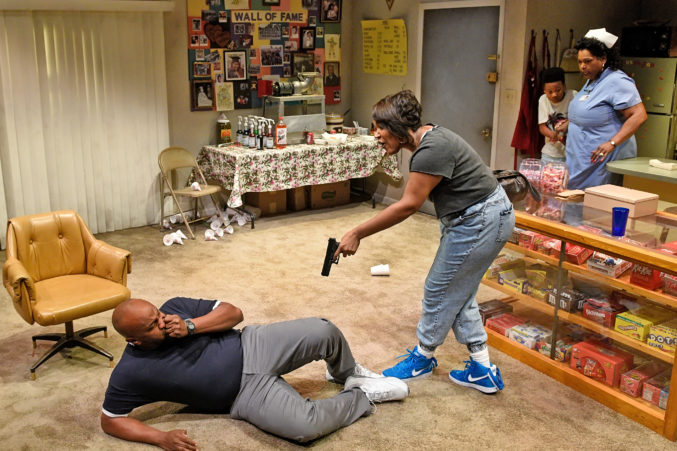 It’s a funny story, though horrific in turns. It took time for Norton to achieve a balance of hilarious jokes about vacation bible school with the completely humorless moments. When he began working on Penny Candy, it was a much darker tale.

“That version didn’t ring true to me. It wasn’t how I remembered my childhood or how I remember my neighborhood,” he says. “I still remember a really healthy and thriving community before it was ravaged by crack cocaine. The community is really bouncing back and making great strides.”

To get the tone just right, Norton thought about the sweetness of candy, sugar highs, and highs in general.

“You get this great rush, this really euphoric rush and thrill and it’s fun and it’s humorous and it feels good, but that can’t last for long,” he says, “and then you crash.”

The crash hits hard in Penny Candy, and one particular, bloody scene may even leave you with a stomach ache. It’s also full of highs, propelled by complex characters played to perfection by a remarkable cast, and a warm nostalgia that shows how much Norton loves his hometown, no matter how turbulent things got.

“The thing I remember the most in the later part of the ‘80s and the ‘90s at the candy house was just how much the neighborhood began to feel like a ghost town,” he says. “There’s a certain vitality to the neighborhood, to the community, and as we journey through the play, we see that vitality slowing being stripped away.”