The man stood outside a white, air-conditioned tent about an hour before he was scheduled to fight. He shook hands and took pictures with the few men, women, and children who recognized him. Most walked right by him. If this were Mexico, his many admirers would have swarmed him. He wore a luchador’s mask with his plainclothes; in a different setting he would’ve stood out. But at Taco Libre, inside the Farmer’s Market near downtown last Saturday, he was far from the only person wearing a mask.

He also wasn’t the only luchador at the 5th annual event, which combines tacos, music, and lucha libre. Had he walked among the crowd—taken in the live music and the smell of freshly made tacos—he may have even been lost in the company of those who wore masks while they ate and drank. But unlike them, he’s worn that mask for decades. He doesn’t take it off for relief from the heat. He inherited it from his father. He’ll be buried in that mask. It’s why the few people who recognized him, largely of Mexican heritage, shouted his name. He flew from Mexico City to be here; this was one of the few chances these people had to see him in the United States. 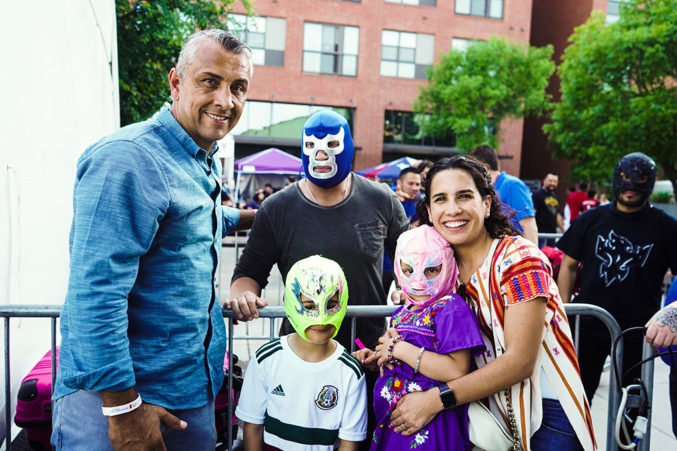 An hour later, as the sun descended and the building’s shadows crept across the hot concrete floor, he emerged from that tent fully dressed in his luchador’s attire. Wearing that iconic mask and a blue and silver cape that flowed from his bare shoulders, he hurried from the shadows of the late afternoon and into the ring’s lights. He walked past those who reached out their hands and angled their phones to get a decent photo. His name came back at him in two syllables: “De-mon! De-mon!” He took off his cape, handed it to someone, and prowled the ring while seemingly everyone stared at him.

Like tacos, the Mexican style of wrestling, lucha libre, has become increasingly popular in the United States. But it’s mere sports entertainment here. Wrestling in Mexico is part of the country’s identity. At its best, lucha libre is a staged satire where everyone in that ring represents a part of everyday Mexican life, particularly for the working class. It’s a metaphor where the rudos, or heels, enjoy corruption in its many variations. They work against the people. Técnicos, or faces, best represent these everyday people. The referees—because they uphold the corruption—are often despised and even hated.

Everyone knows rudos are corrupt. They cheat. It’s built into the system. Most times, the best you can do is survive. A few fight back and get crushed. Fewer fight back and win, even if only symbolically. They become heroes and icons. This is why people cheer wildly for Blue Demon Jr., who comes from one of lucha libre’s immortal figures.

Blue Demon Jr. was 5-years-old when he discovered his favorite wrestler was his father. Blue Demon, his father, along with El Santo and Mil Máscaras, are the three most important luchadores in Mexican culture. They starred in movies where they fought against devils and vampires and monsters and Nazis. They were just frail enough to remain relatable. When Blue Demon died of a heart attack at 78-years-old in 2000, the country mourned. And just like El Santo, Blue Demon wore his mask during his funeral. With the death of his father, Blue Demon Jr. became the only person allowed to wear that official mask. That mask is everything.

“Masks are part of Mexican culture,” Blue Demon Jr. says in Spanish. His light-colored eyes look greenish-blue when contrasted against his cobalt blue and metallic silver mask. “[Masks are] part of the global culture because it’s not just Mexicans who have worn them. The Mexica (the indigenous rulers of the Aztec Empire), the Egyptians, the Sumerians, the Celts, all of them wore masks. So, they’re definitely not solely ours but they’re part of our values. As Mexicans, the Mexica culture has given us a lot, a lot to understand the world with. And Mexican wrestlers are now a world-wide reference. When one sees a mask, one thinks of Mexico.”

Some of Mexico’s greatest public intellectuals have written about the role that masks play in Mexican society. They both hide and create an identity. In lucha libre, a few masks are symbols of something greater. When Máscara Mágica, a rudo, carried Blue Demon Jr. to the top rope for the entire audience to see, you felt a sudden tension as he attempted to rip off the mask. 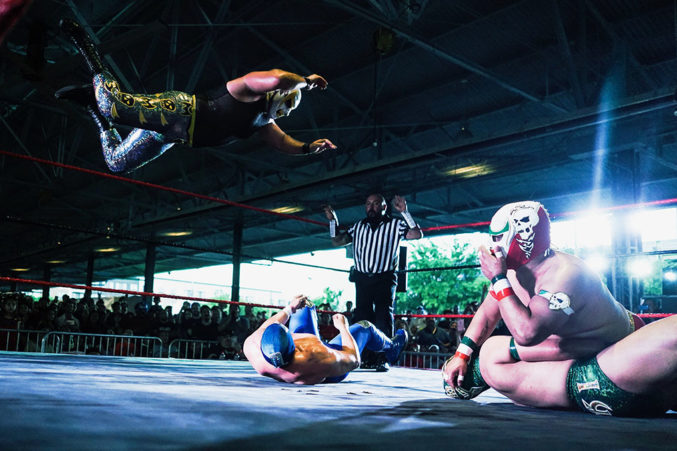 The referee told the rudo to stop but did little else. The opponent—wearing a devilish mask with sharp, fanged teeth and skulls on his pant legs—untied it and tried taking away everything that Blue Demon Jr. is. “La mascara!” a boy yelled out as Blue Demon Jr. fought to keep it on his face. Our hero fell backward with his feet jammed under the ring corner’s top turnbuckles, hanging upside down with his mask pulled above his chin. A girl in the front rows covered her mouth as if in disbelief.

There’s a part of all of us that want to see Blue Demon Jr.’s face. There are always a few that cheer for the rudos. Thus, there are some that would like nothing more than to see a person’s soul exposed. You understand that temptation. You may even feel it. But most also understand that discovery isn’t worth the loss of something greater.

Blue Demon Jr. is an antihero befitting of the country he’s from. Part of loving Mexico is acknowledging the deep flaws that exist within its breathtaking beauty. It is both a wondrous and frustrating place. Like in every country, it’s a place where both saints and demons exist, sometimes within the same person.

“I definitely think it’s the social place in which we live,” Blue Demon Jr. says before the fight. “We’re tired of hearing promises that are never fulfilled, and that they [those making promises] see themselves or want to pass themselves off as heroes or saviors of society. Regardless of medium used, I try to help people and do things for them. I always try to give something to the people.”

To the delight of the people, Blue Demon Jr. recovered. He still fought the rest of the match with his mask untied. When he stood in the ring’s corner, lights shined off the silver and the blue. It shined like satin. Combined with the sweat glistening from his torso and arms, Blue Demon Jr. appeared to glow.

After losing their first fight, the técnicos won the last two bouts. Satire cannot cross a certain line or else it mocks those who use lucha libre to find a bit of solace in many of Mexico’s contradictions. And so, Blue Demon Jr. kept his mask. He always does. Once his wrestling days end, in the same way he inherited it, Blue Demon Jr. will pass his legacy to his son. 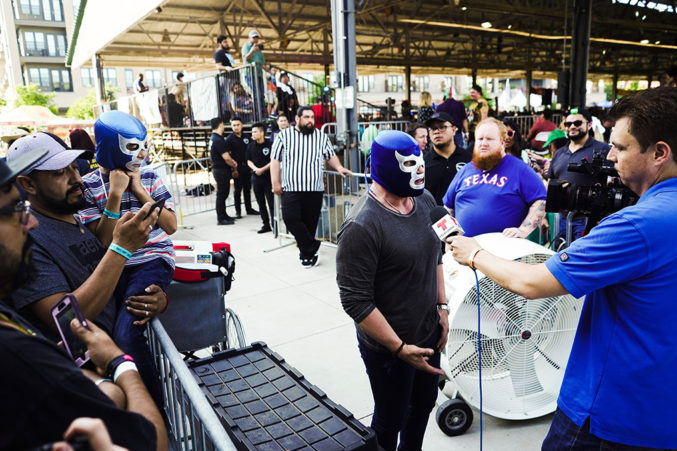 Presumably, so long as lucha libre exists, that process will continue. It’ll create the type of lineage associated with royalty. And so long as there are men and women who tell their children about the great Mexican luchadores—who they are, what they represent, what they symbolically fight for—there will always be someone eager to shake the hand of someone like Blue Demon Jr., even if they live in a different country from where lucha libre functions best. For those same reasons, there will always be someone who gasps at the sight of a rudo attempting to destroy the existential being of what those técnicos represent.

When the fight ended, Blue Demon Jr. grabbed the microphone. In Spanish, he thanked the crowd for their love and support. Aski the Mayan Warrior, a técnico who was Blue Demon Jr.’s tag team partner, spoke in Spanish, then in English. He mentioned the absurdity of building walls. Wicked rudos can enjoy tacos and build walls. Blue Demon Jr. listened and nodded.

Blue Demon Jr. left the ring after the speeches. He took a few more pictures and shook a few more hands as fans—some wearing his mask or a t-shirt with it emblazed on it—watched intently. Men, women, and children again yelled his name. They reached out to touch him as he returned to the white tent. Mexico, where his message is always needed, was waiting.