U.S. News Ranks Dallas-Fort Worth 21st-Best Place to Live in the U.S.

Because of course this list is super-important to you.
By Jason Heid | March 3, 2016|11:47 am
Advertisement

U.S News & World Report has released this year’s list of its “Best Places to Live,” and Denver tops the list. I’d like to hem and haw and declare it an outrage that Colorado’s capital is thought to be a more appealing a place to call home in the estimation of a bunch of Washington-based editors than is Dallas. Only thing is, Denver is pretty great. It’s hard to argue that seeing the Rocky Mountains on the horizon when atop a downtown skyscraper isn’t a more fulfilling daily experience than is seeing JerryWorld (which is what’s visible from D Magazine’s World Headquarters).

No. 2 on the list is Austin, which soundly beats Dallas-Fort Worth on the U.S. News scorecard thanks mostly to its cool-kid reputation. See for yourself. Here’s Austin on the left, and DFW on the right: 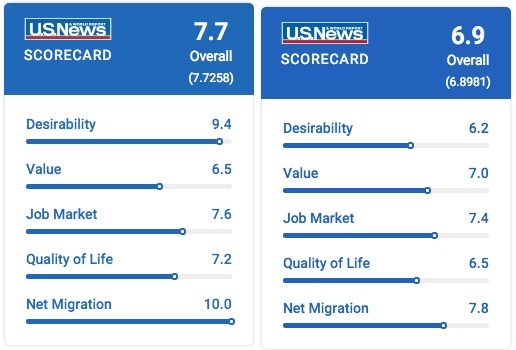 We’re a better value than Austin, and our job market is competitive. Where they lap us is in desirability. According to the U.S. News methodology, this score is based on a survey that asked people across the country where they’d like to live. Thanks to events like South by Southwest and Austin City Limits, Austin’s national reputation is such that I’ve heard people declare that they love it even though they’ve never been there, let alone experienced rush hour on the hellmouth that is its stretch of Interstate 35.

And Austin has been growing faster than DFW, so it’s hard to dispute the net migration numbers, even if it seems a little unfair to compare us on this count to an area that’s five times smaller than DFW in terms of population. Our growth rate remains especially impressive given that we’re already the fourth-biggest metro in the country.

We’ve got a ways to go, if ever, in winning that desirability fight, so let’s not protest too much. After all, DFW is No. 21 on the list, well ahead of the three metropolitan areas (Los Angeles (83), Chicago (90), and New York (96)) that boast larger populations. We’re doing pretty well for ourselves.

Except, that is, for the small matter of the indignity of being ranked behind Houston, which finished at No. 17. On the face of it, this is a travesty, losing out to our sweaty older brother. Dig into the numbers, however, and it’s more obviously no big deal. Look at DFW on the left and Houston on the right: 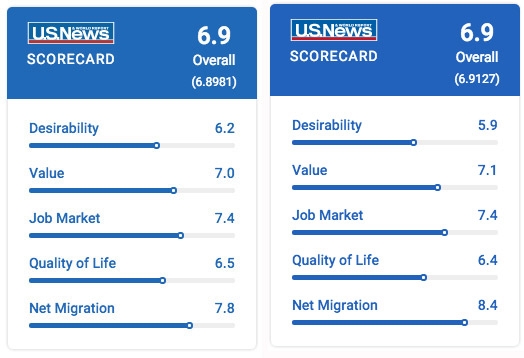 We’re a more desirable a place to live than Houston (obviously), our quality of life is better (of course), and our job market is just as good. Houston only edges out DFW because of the net migration numbers. I’m going to guess that because of the decline of oil prices and the outlook for Dallas’ economic performance vs. Texas as a whole, that situation may well correct itself before the next edition of this list.

I know, I know. You’re welcome. Now you can sleep tonight.

Am I being too sensitive here?
By Tim Rogers
Transportation

Scalawags have been using the bridge to, you know, WALK places.
By Tim Rogers
Business

When she wants to wind down, Toyota CFO Tracey Doi heads to the largest of the Hawaiian islands.
By Bianca R. Montes
D Magazine Directories