The following are a series of graphics from the recent presentation I gave at the Texas Trails and Active Transportation Conference in Fort Worth.  This is just a sub-set of the 100 slides and hour long talk I gave about “Breaking the Cycle of Auto-Dependence,” but I think the crux of the argument is found in the following graphics and parallel narrative. 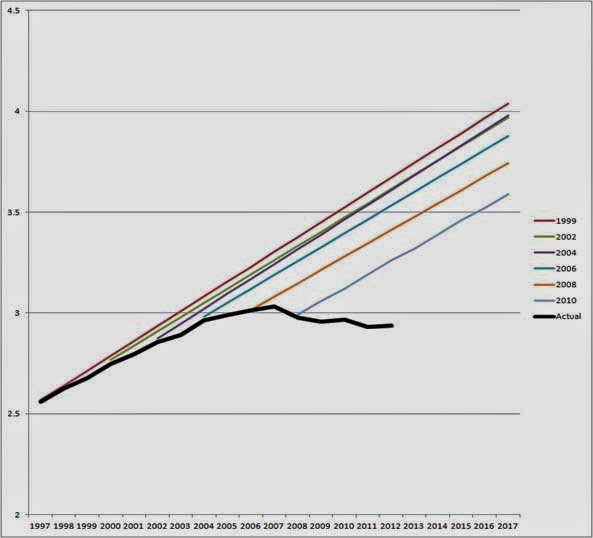 First, is the now infamous graphic from the USDOT showing how every two years or so, despite all evidence to the contrary, they project a return to rising national Vehicle Miles Traveled (VMT).  Unless they are truly insane (possible), there has to be some kind of underlying logic (which may very well lead to this demonstrable version of insanity).  What could that underlying logic be?  I for one believe it’s more about inertia than corruption.  Though, like all forms of infrastructural overshoot, there is certainly some of that to be found as well. 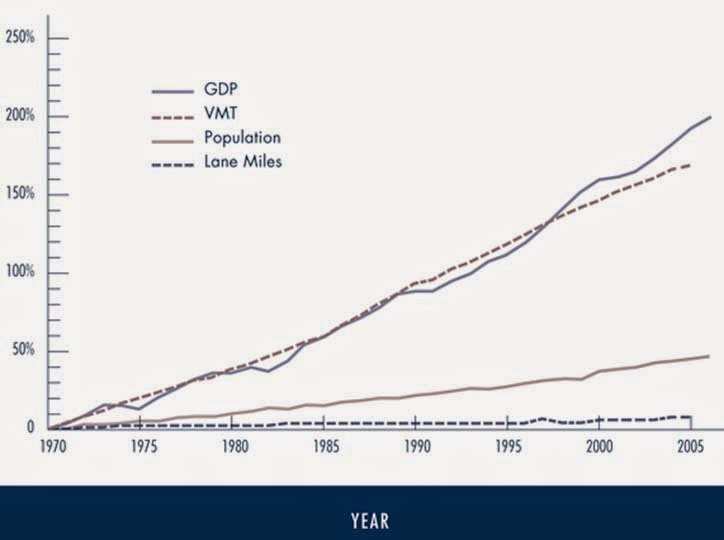 I think the primary reason that we keep projecting higher VMT is that we believe that VMT is tied to GDP.   Rising VMT means rising GDP and vice versa.  In fact, the two have risen in lockstep since the advent of the automobile age.  It makes some sense, buying cars, building roads, paying for gas, killing and maiming each other on the road, all is some form or fashion of economic activity happening.  Therefore, if we’re optimistic (and this is a political process, which it is), we like to make the numbers look good.  Back to growth!

Unless it isn’t needed of course.  What if it actually makes us less mobile?  What if more big road money actually hurts us economically? 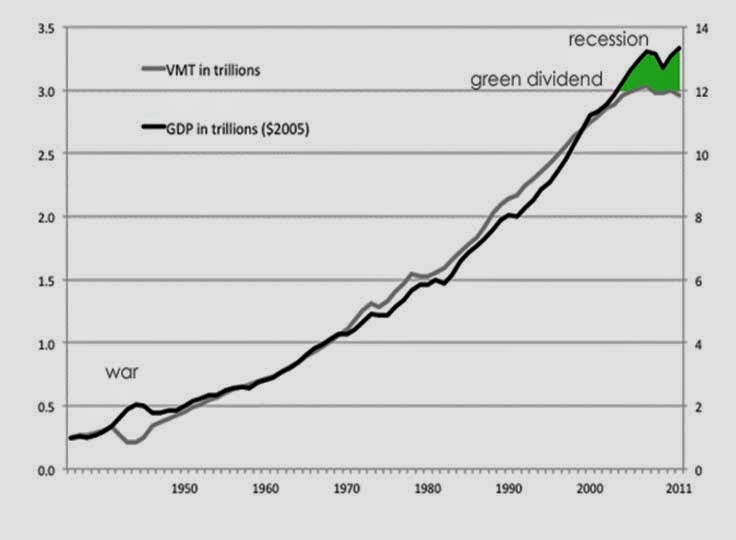 First, is that despite the 08-09 recession, GDP has begun to climb again, completely independent of VMT, which has peaked and is beginning to fall (for a number of easily explainable reasons).  Furthermore, if you look at NYC or Copenhagen or Vancouver, their specific citywide GDPs continue to spike despite reducing VMT far more quickly than nationwide statistics.  Which leads to the second problem with this logic: 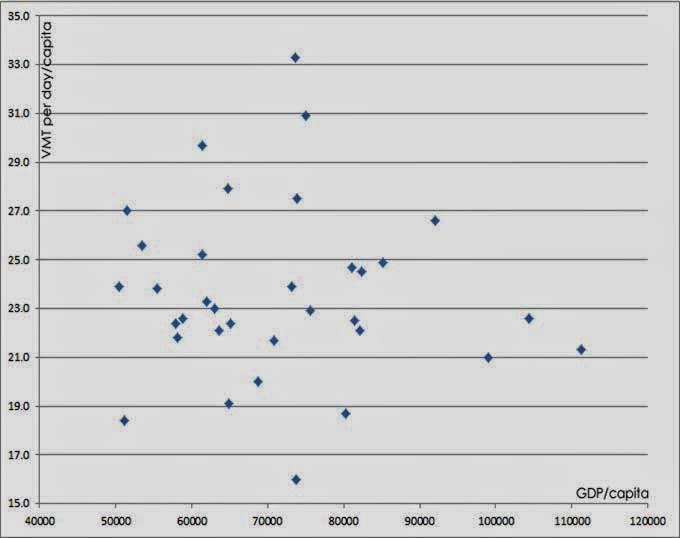 It only deals with nation-wide trends, not city by city.  Find me the pattern above comparing VMT per capita to GDP per capita of the top 25 US metros.  There is zero pattern.  In other words, the amount people drive has ZERO to do with GDP.  There is even some evidence that GDP per capita is growing fastest where they’ve spent the least on highways in the last 10-15 years.

What is becoming evident is that the value created by more highway capacity is approaching an ROI of 0 to 1.  In other words, there is literally no gain from any highway spending, a tell-tale sign of systemic overshoot, ie infrastructural over-build.  We’re simply investing in future relics that we can’t maintain, don’t need, don’t alleviate capacity, but only serve to disconnect us further. 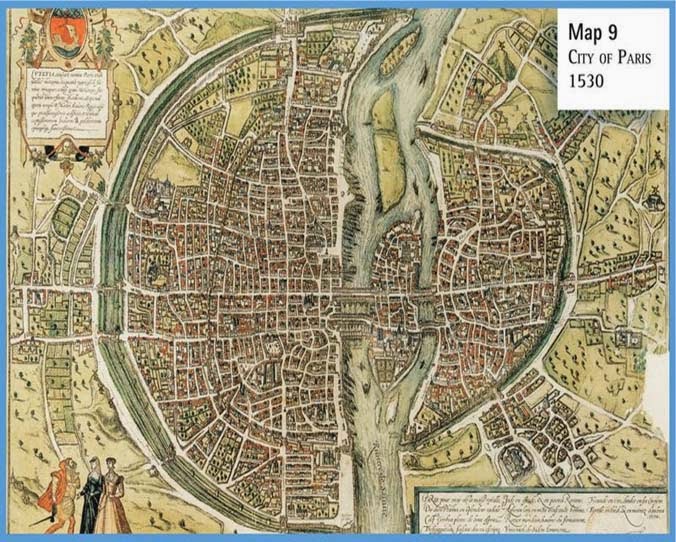 The reason for this is rooted in Prof Peter Newman’s theory of the hour-wide city, which states, in effect, that every city throughout time is rooted to half-hour commutes from edge to core as residential patterns orbit polycentric employment centers.  Thus, the velocity of the transportation infrastructure and technology we build dictates the form and density of the resulting city.  In other words, form does follow function as long as that function is movement.  Fast travel just spreads us out, thus re-inforcing the cycle of car-dependence. 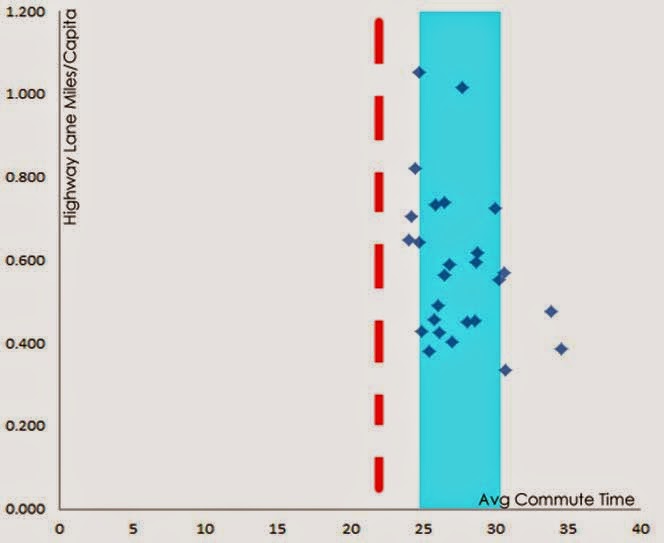 Above shows Average Commute Time by city across the US in relation to the amount of highway lane miles built per capita.  This shows irrefutably that highway capacity through the city is ultimately meaningless.  Build more highways, land use and city form adapts by spreading out. 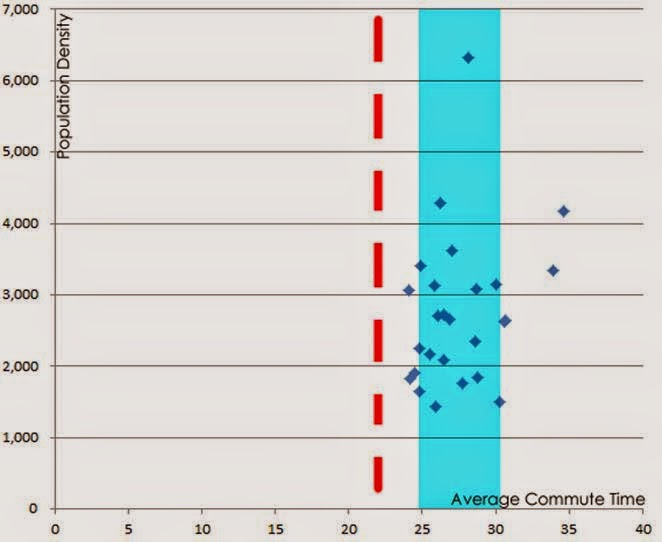 Density also doesn’t make a different.  People like a certain amount of space between where they live and work.  Call it preparation/decompression space, the push/pull tension inherent in groups of people hold all cities throughout time in equilibrium.  After all, the one constant in all cities is people. 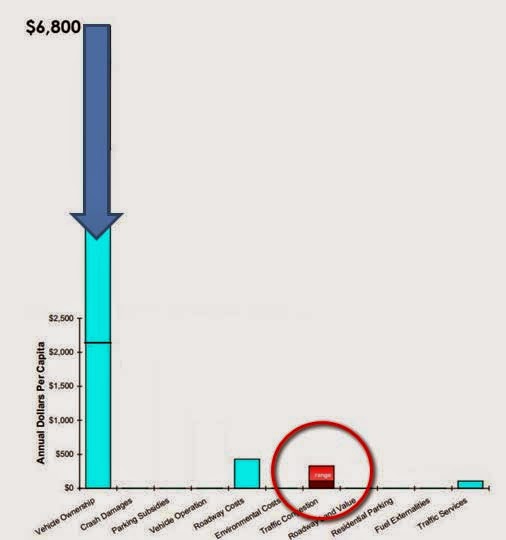 Meanwhile, as we chase the bogeyman of congestion because it costs the country $120 billion a year, we’re inducing car-dependence, which costs a mere (don’t look behind the curtain) $2 trillion per year.  I said don’t look behind the curtain.  The interesting side of this is that on a per capita basis, congestion costs $400/year and is remarkably consistent across cities large and small.  This is the cost of doing business.  Spending hundreds of billions to save a billion or two is flawed policy.