Get ready for the dreaded double-dip. $3 trillion in commercial real estate is about to go [poof]:

Why do you think banks have stopped lending in this arena? The market is completely saturated with vacant real estate. Commercial real estate either has a market or sits empty. At least with residential real estate if you drop prices low enough you will get buyers. With CRE if you built a complex with no foot traffic you can’t give the stuff away. The loan is only one aspect of costs. You have utilities and other fixed overhead. The fact that banks have pulled back from this market tells us no good deals are coming to the table.

How’s that sprawl working out for you? I’ve always loved the idea of business park. Not loved as in liked, but loved as in amused that people thought they might work. Banks lose. 🙁
——————————
Charles Hugh Smith discusses that the root of the housing problem hasn’t been solved and reminds that housing ownership is really “ownership.” You’re still paying off debt. The banks own the house. Banks Win! 🙂
——————————
Zero Hedge splashes cold water on people foolish, naive, or gullible enough to believe realtors who say “now is the time to buy!” Of course, they do. Their livelihood depends upon you buying. Except:

There are 140 million personal residences in the US. Today, there are 26 million homes either directly or indirectly for sale…Another 8 million mortgage owners are late on their payments and are on the verge of foreclosure, bringing the total overhang to 34 million homes.

Now, let’s look at the buy side. There are 35 million who are underwater on their mortgages and aren’t buying homes anytime soon, nor are the 35 million unemployed and underemployed. That knocks out 50% of the potential buyers.

Here is where it gets really interesting. There are 80 million baby boomers retiring at the rate of 10,000 a day. Assuming that they downsize over time from an average 2,500 sq ft. home to a 1,000 sq. ft. condo, and eventually to a 100 sq. ft. assisted living facility, the total shrinkage in demand is 4.3 billion sq.ft. per year, or 1.7 million average sized homes. That amounts to a shrinkage of aggregate demand for a city the size of San Francisco, every year. You can argue that the following Gen-Xer’s are going to take up the slack, but there are only 65 million of them with a much lower standard of living than their parents.

Perhaps banks should be hiring urban experts to understand where true and lasting value is…
——————————–
Now, to the fun stuff…

Wired has an awesome article on NYC droppin’ the mathematics upside your head to deal with traffic. NYC (smartly) compiles just about every form of data imaginable; a painful reminder of just how far behind Dallas is. This was evident when New York Mag put together their neighborhood livability rankings based heavily upon various publicly available statistics the City has compiled. Dallas, nor the metro, has anything close to it.
——————————-
Lastly, Laurence Aurbach at Ped Shed links to a new study suggesting that intersection density is the single most critical factor for determining walkability, much moreso than density or diversity. I could have told them that. This was actually livability indicator #8. Perhaps, I should change the name. 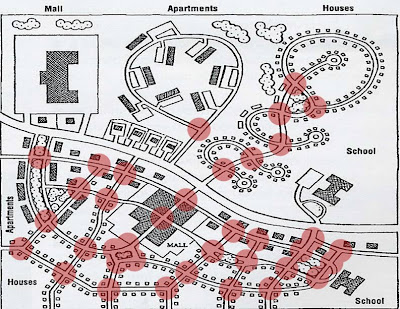 Furthermore, Density is merely the response to desirability and walkable urban form is what accommodates a range of densities based on demand. Diversity, well that is simply a by-product of livability, which has at its root mobility where walkability is still the best mode with the most positive and least negative externalities.

This goes beyond walkability and more toward the “neural network” and interconnectivity of the grid in general, but as we all know a four-way intersection generates traffic from 4-directions rather than 2 creating a higher degree of traffic (by foot or car) which retailers need, which in turn can (dependent upon design) generate more foot traffic.

This study could get “smarter,” in my opinion if instead of merely counting intersections it assigned a rating system to each of those intersections. In a way measuring node density (or quality thereof) rather than just intersection density and the node rankings would be based on two factors off the top of my head:

1) amount of directions intersecting the intersection, ie a four-way is better than a two-way (distance of which is mitigated by the density calc) and then;

2) a professional subjective factor of quality of pedestrian experience.

This is actually something that I have been thinking about formulating for some time, I just haven’t had the time to get around to it yet. I know an academician is probably loathe to apply some subjective criteria, but what is the point of being a professional if you can’t add your expertise to an equation that by nature would always be a blunt abstraction.