Yesterday, Neiman Marcus Group announced that it would be furloughing most of its 14,000 employees. Those remaining will take temporary salary reductions.

Says CEO Geoffroy van Raemdonck, “I have decided to waive 100% of my salary to do my part to support our company, and my direct reports have also decided to waive a significant amount of their salary as well during this temporary furlough.”

The decision is subject to review on April 30. Neiman Marcus Group stores (Neiman Marcus, Neiman Marcus Last Call, and Bergdorf Goodman) are tentatively scheduled to re-open at that time. All have been closed since March 18.

“While these are the most difficult decisions to make, our focus is on ensuring our business is protected over the long-term so we can continue serving our associates and customers,” says van Raemdonck.

Neiman Marcus Group’s previous response to COVID-19 has been both commendable and questionable.

Last Wednesday, the company’s alterations studios in California, Florida, and New Jersey pivoted to focus full-time on supporting the medical community. The Dallas Morning News reported that Neiman Marcus Group had partnered with fabric and craft retailer Jo-Ann Stores to facilitate the creation of nonsurgical masks, gowns, and scrubs. Both Neiman Marcus Group and Jo-Ann Stores generously pledged to cover the costs. 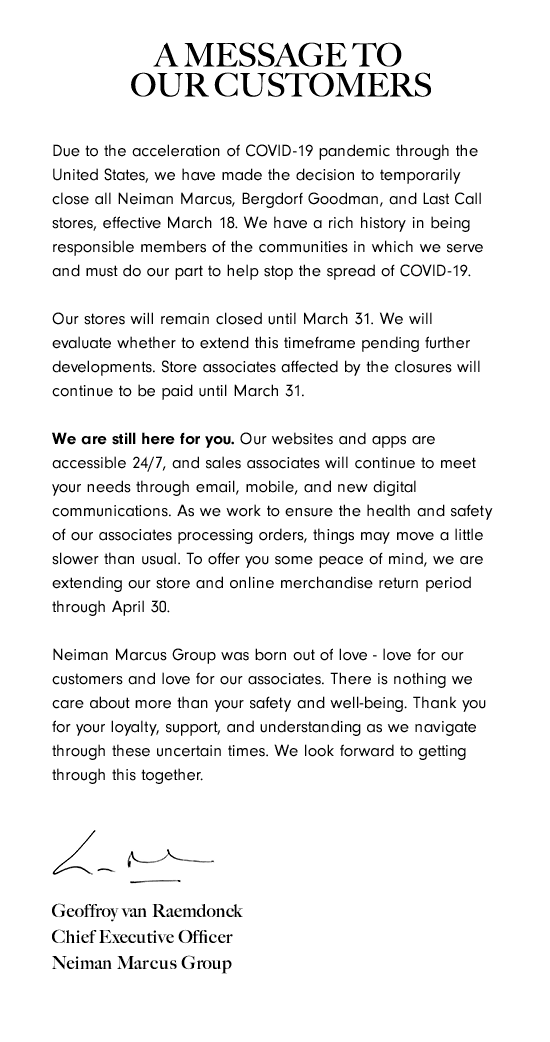 A letter to customers from Neiman Marcus Group’s CEO, posted on NeimanMarcus.com.

However, at Neiman Marcus Group’s commercial photo studios, employees had been frustrated with corporate decision-making related to COVID-19.

We spoke with an individual affiliated with Neiman Marcus operations who wished to remain anonymous for fear of reprisal. In the past few weeks, product shoots had continued as usual. “The [photo studio] employees were very worried and uncomfortable [to be] working away from home,” said the source.

According to the source, employees felt that photographing products for Neiman Marcus Group’s online retail platforms was non-essential and that the studios should have closed after Dallas issued its shelter in place mandate. Instead, says the source, both studios–one in the warehouse district of East Dallas, and one in Pinnacle Park in West Dallas–remained open through Thursday evening, and neither had modified their hours of 9 a.m. to 4:30 p.m.

“[Photo studio employees] were given hand sanitizer, asked to wash hands regularly, and [told to] stand 6 feet apart,” says the source. “With what [the employees] do, working 6 feet apart was not realistically doable.”

At the East Dallas location, says the source, up to 10 employees were in a room at any given time. At the West Dallas studio, employees were split into groups of 3, and group members worked together in close proximity.

Neiman Marcus Group issued an official letter to studio employees to present if questioned, stating than Neiman Marcus was functioning as an essential business under the ordinance and that certain operations were continuing, subject to stringent social distancing measures. These operations were not explicitly named.

We contacted a Neiman Marcus Group spokesperson for comments. “Under the Dallas ordinance, [Neiman Marcus Group] can ship and deliver goods directly to residences; which is a defined Essential Business/Essential Retail,” said the spokesperson. “Our in-house photo studio is not consumer-facing. Since the COVID-19 order, our photo studio has not had any modeling shoots and has limited its shoots to taking product photographs for our online products available for shipping.”

While the future is uncertain for both Neiman Marcus Group and its employees, the retailer will continue to operate its websites and apps as usual through April 30. Neiman Marcus asks customers to anticipate a delay “as [the company] works to ensure the health and safety of associates processing orders.”