The Loudest, Most Badass, Full-Throttle Family Business in Dallas

The Loudest, Most Badass, Full-Throttle Family Business in Dallas

Subscribe
Advertisement
Years ago, as their kids tore up the yard on dirt bikes, Rick Fairless and his buddies would flip on the stereo, pull cold ones out of an icebox, and hash out their motorcycle nirvana: a custom shop with a bar where they could drink alongside their choppers instead of leaving them out front to be tampered with by passersby. Fairless had put in 20 years selling paint for Glidden before he decided to make a couple of calls, just to get the stupid idea out of his system. He opened his shop a year later, in 1996.

Strokers Dallas encompasses 2.5 acres off Harry Hines, offering everything necessary to get into the motorhead subculture. In the retail store, you’ll find the whacked-out Rick Fairless custom bikes on glorious display, plus plenty of gear and get-ups. Grab a pair of chaps, but don’t forget to cover your ass: Strokers is a licensed Allstate agent.

Strokers mechanics service American-​made bikes and produce five to 10 custom builds each year. A Rick Fairless design doesn’t come cheap. His kaleidoscopic Woodstock bike would set you back about $100,000. If you have a classic auto that’s been collecting dust, Punch Wally Garage will get it car-show ready. Taz’s Detail makes your hog sparkle, and outdoor vendors will accessorize you with silver skull rings and custom-designed patches.

Behind Strokers Ice House, the asphalt courtyard fills with everything from Big Dog V-twins to Stella scooters and, of course, a hell of a lot of Harleys. The clientele isn’t discriminatory. You’ll find old-timers and infants, Southwest Airlines’ white-collar staffers who cross the street for after-work drinks, babes as hot as the decal on a mudflap, tattooed outlaws, and fresh-faced tourists who may have caught one of Strokers’ reality shows, Texas Hardtails and Ma’s Roadhouse (the latter spotlighted Fairless’ salty-mouthed mother, rest in peace). If you’re looking to witness a barstool-shattering brawl, however, ride elsewhere. “A lot of bike clubs come here, but we’re all cool,” one full-patched 1-percenter told us. “This is neutral ground.”

We spent a recent Sunday at Strokers to knock back a few beers, eat the Herschel Walker-raised chicken (the football great is their most loyal custom bike client), and experience the Rick Fairless pipe dream in full-color high definition. It turns 25 years old on October 1, and Stroker’s is celebrating with a weekend full of events, headlined by Warrant.

The Strokers grounds are filled will all manner of ephemera. Dinosaurs in all quarters, a life-size plastic Clydesdale stands guard in an office hallway, and you can even drink a beer on a deck built outside an authentic Grateful Dead tour bus—once owned by Butch Patrick of Eddie Munster fame—which Fairless acquired in a swap with his friend, Richard Rawlings.

How old were you when your dad opened this place? Lena: “Seven or 8. I rode dirt bikes around, hem-hawed with the people, played Monopoly with the customers. It made me the people person I am today. I’ll never forget a name.”

When did you start getting paid? “I think 17. I started in apparel and then went to parts. I’ve been through every single department.”

Will your kids work here? “They kind of already do. Rocky will go into the service bay and help the techs. Polish something, turn wrenches. He could actually ride a dirt bike before he could really walk or run. He led the parade at his preschool on this dirt bike. No one else could ride a bike without training wheels.” Pearl: “Mommy, I wanna ride my dirt bike.” Lena: “Not yet, madam. You’re not wearing the proper clothes.”

What do you produce? Tom: “I have a few companies. One is LOUD Entertainment. I used to tour with Mötley Crüe. I’m the one bringing Warrant in for the anniversary.” Brittany: “I’m helping him with the event. He took me on my first long ride yesterday. We rode for like three hours.”

What did you think? Brittany: “I absolutely love everything about this. I love the community. Everyone treating each other with respect.” Tom: “When you come here, you get unconditional love, unconditional acceptance from Rick. Fifteen years of coming here, I’ve never seen anything bad happen. You’d think you get a bunch of bikers together, there’d be a problem. Not here, man.” 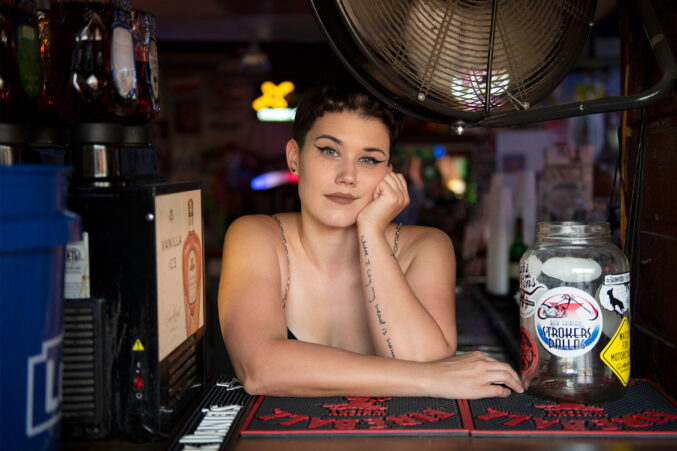 Do you ride? “Mmhmm, a 1993 Harley-Davidson 883 Sportster. Both of my parents are ex-street racers, and I always wanted a motorcycle, but my mom would never let me. I ended up dating a motorcycle mechanic here when I was like 19, and I kinda fell in love with it.”

What did your mom think of that? “Oh, she hated it. I almost married him, too.”

What kind of bike is this? David: “It’s a 2006 American Ironhorse Texas Cowboy. They used to build them out in Fort Worth. People are like, ‘Oh, that’s a bar hopper.’ Hell, I go everywhere on this bike. Galveston. Laredo. Everywhere.” Katherene: “We’re going to be riding to Galveston. There’s a motorcycle rally that happens every November. The first time I went, I was sitting on that little seat, and I said to him after, ‘You’re either gonna have to get a younger girl or a better seat.’ So he has a different seat he puts on. They call it the ‘lady tamer.’ ”

What do you do to get those arms? Katherene: “I work out six days a week. I was just in my first bikini bodybuilding competition yesterday. It’s a new thing for me. I love it.” 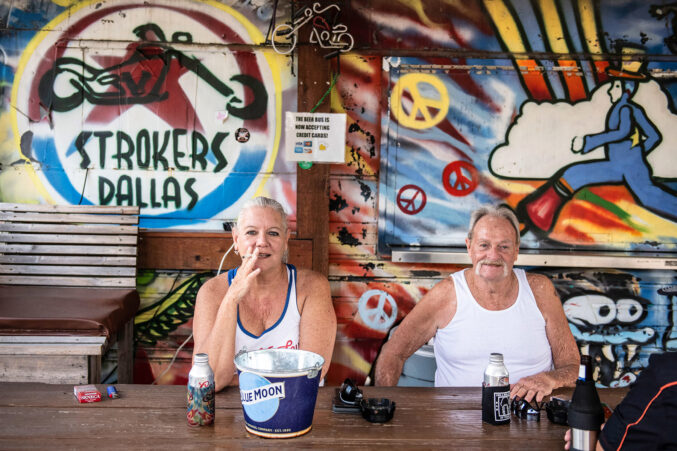 Are you here every weekend? BJ: “At least 20 years. Fridays, Saturdays, and Sundays.” Tom: “I’m here Thursday to Sunday. A bunch of us retired guys come down here Thursdays.”

And this is your spot? Tom: “I made this table. Raised it up, put cushions on it, painted it.” BJ: “If you’d been here yesterday, we usually have a sign that says ‘reserved.’ ” Tom: “Rick told us somebody tore it off. I don’t know who did.” 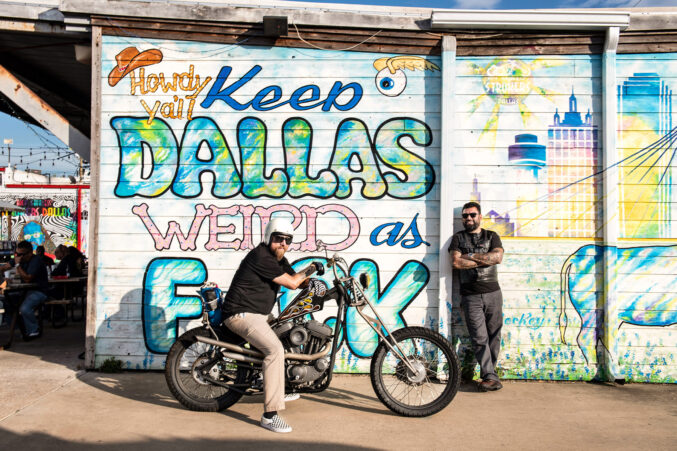 You look younger than some of the folks. George: “Well, you haven’t been here on Saturday night.” Andres: “There’s a lot of trampy women, and they’re a lot smarter than you think.”

What brings you to Strokers today? Chris: “We came to get patches on our vests, have drinks. I’ve been riding Harleys for about a year. I grew up jumpin’ hills on dirt bikes, so this is child’s play.” Tiara: “I have a Honda Shadow Phantom at home. I bought my bike last November and that’s how I met him. We got married in February.”

Congratulations. Where’d you meet? Tiara: “We met at another biker bar that my girlfriend took me to, to celebrate me getting my first bike.” Chris: “She saw me and said, ‘Oh, my goodness, he’s so big and chocolaty. I have to have him.’ ” Tiara: “Oh, whatever. He has a big personality.” Chris: “That’s a polite way of saying I’m an asshole.”

What can you tell me about the Scorpions? “It’s a motorcycle club. It’s hard to get into, but it’s fun once you do it.”

How fast have you gone on a bike? “200 miles an hour on a quarter. I’ve been racing Top Fuel Harley-​Davidson drag bikes for 20 years. I’ve won and lost. I don’t travel the national circuit anymore like I used to, just local stuff now.”

Do you have sponsors? “I had all of that, but it’s too much pressure. Now I just play my own game.”

You have any close calls? “Yes, I have. If I ride motorcycles, I’m gonna have close calls. I fell over going 4 mph and crushed my ankle three years ago.”

What are you working on? “This is a Big Bear Athena. We get a lot of Ironhorse and a lot of Big Dog. Choppers, they’re fun to work on. I bought my first Harley when I was 18 and I’ve been ridin’ and workin’ on them ever since then. Everywhere I go, I ride. The only time I don’t ride is if it’s snow. I used to when I younger, but not anymore. I remember slidin’ down Northwest Highway up the bumpers of cars in the snow and slush. I have a truck back there and that’s all it does is sit.”

You leave it here? “I live here. My wife left me and Rick said, “Why don’t you just get an RV and stick it out back?” 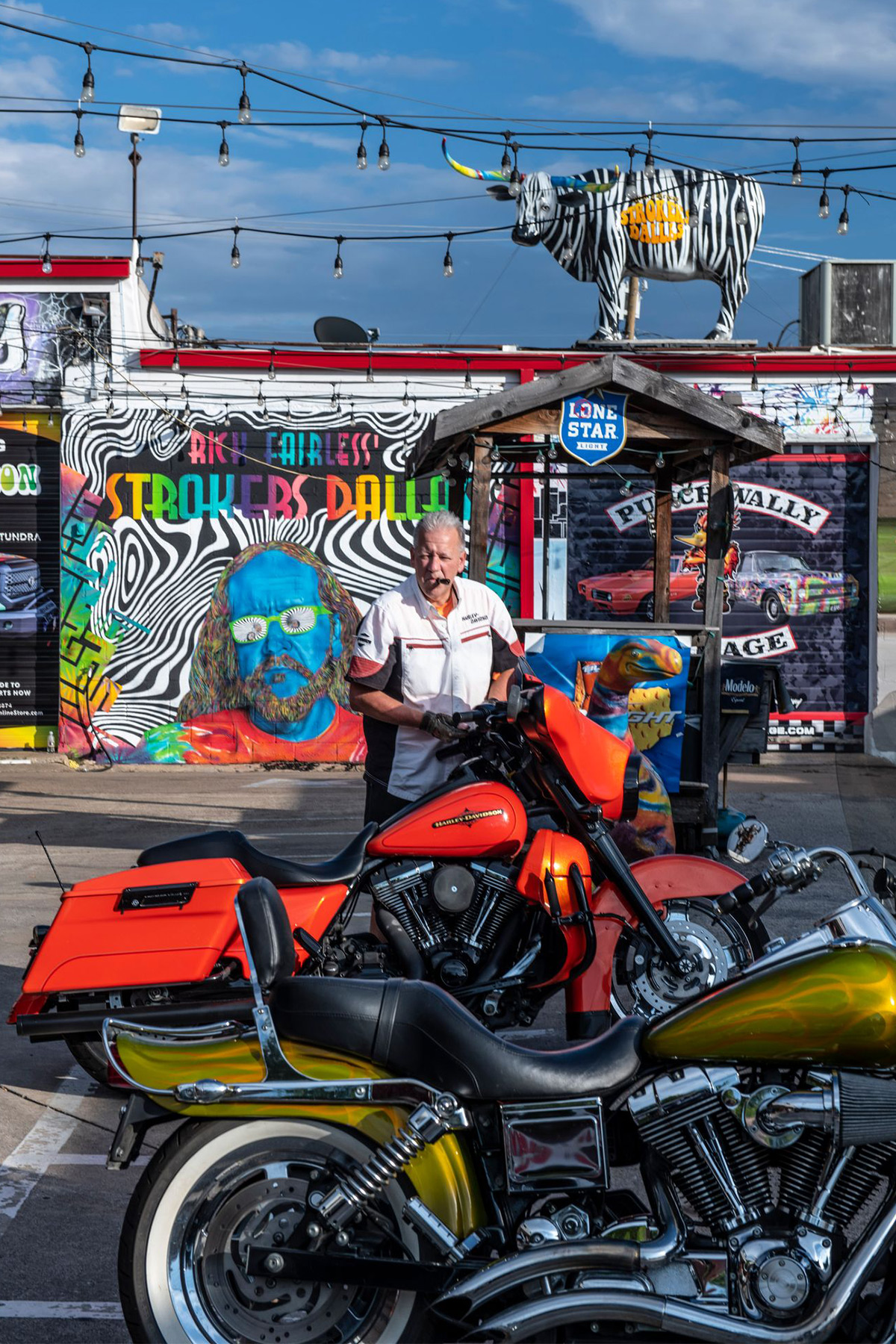 What the best ride you’ve been on? “Sturgis. I went in 2010 and last year. The topography is phenomenal. You’ve got windy roads, rivers, the Mount Rushmore monument. It’s all about America. To see, it is breathtaking. This is my third Harley. It has 54,000 miles on it.”

Do you come here a lot? “First time. I’ve always wanted to get here, I’m just always driving through. I just moved to Dallas.”

What brought you? “Work.”

What do you do? “Private equity. I run businesses, turn them around, divest of them, merge them. Stuff nobody wants to do.”

Four Wheels Are Welcome, Too

“Punch Wally Garage is where we do old classic cars and trucks. We’re working on a ’69 Corvette, ’68 Charger, a ’62 Nova over there. Punch Wally is the nickname I used to call my brother when we were kids. It basically means goofball. My brother is one of the top attorneys in the country and he’s my best friend. When he was 16 and I was 17, I borrowed his ‘66 Mustang and I totaled it. For 45 years he’s held it against me. So I bought this and refurbished it and then gave it to him.” —Rick Fairless

If you don’t catch Fairless padding around in his signature tie-dye tee and Chuck Taylors (he now has more than 200 pairs for reasons he can’t explain), he’s either playing golf with his lawyer brother or off at a rally, riding with the exclusive Hamsters Motorcycle Club. Fairless has never taken a sick day in his entire life. He rolls in to work at 2:30 a.m. every morning, and on the two days a year Strokers shuts down—Thanksgiving and Christmas—he’s in the office, enjoying the peace.
View Gallery

We're the one city that can claim a hair color. (How awesome is that?)
By D Magazine
D Magazine Directories