One afternoon in late June, Kevin Carr peels off a neon reflective vest and sinks into an office chair. The building is damp and hot and hasn’t been touched for years. Carpet in the hallway feels like walking on a sponge. He sets his hard hat on a desk and apologizes. This should have been a very different conversation.

Carr is a Dallas success story. He took a home-brewing hobby from his garage to a 14,000-square-foot warehouse. He called it Community Beer Co., packaging it with philanthropic efforts that have raised money for people with multiple sclerosis and organized volunteers to fix burst pipes after the state’s power grid failed. “We’re named Community for a reason,” he says. “We try to do those things.”

In 2011, he was one of the pioneers who navigated a byzantine city bureaucracy that had no idea how to accommodate a commercial brewing operation. In the years since, the craft beer industry has thrived, thanks in part to stubborn entrepreneurs like him. By 2020, Community had become the third-largest independent brewer in Texas.

When the company outgrew its space in the Design District, Carr was ready. He had plans to transform a pair of nearby old warehouses off Interstate 35. Community brewed a three-month supply of beer, enough to keep taps flowing and shelves stocked while Carr installed equipment in the warehouses and got his yeast working again. He began filing permits in September 2020, with designs calling for an outdoor biergarten with a stage, a two-story taproom, a restaurant, a private event space, offices, and enough room to both boost beer production and start distilling spirits.

Nine months later, sitting in that hot, dingy office, Carr explains how his ambitions have so far been dashed. The city still hasn’t approved all of his building permits. In fact, his brewery—$4 million worth of stainless steel tanks and canning and bottling lines—is sitting in pieces in a parking lot because he doesn’t have permission from the city to epoxy the brewery floor. With production halted, a business that was generating north of $10 million in annual revenue is now doing zilch. Even if he could install his equipment next month, it would still take him six weeks to get his dozen strains of yeast working at their previous volume.

Carr looks weary as he talks. He says he has been so stressed that a doctor ordered brain scans to make sure he wasn’t at risk of stroke. “I’ve been in business for myself over 25 years across different companies, and this is the absolute worst thing that’s ever happened to me,” he says. “That’s counting the pandemic. It’s counting the recession of 2009, which almost sunk my software company at the time, but we survived it. … I wake up in a sweat in the middle of the night, thinking about how we’re going to survive.”

The nerve center of Dallas’ permitting process is a drab, outdated building on Jefferson Boulevard called the Oak Cliff Municipal Center. Developers sometimes show up as early as 3 am to get in line for face time with city staffers. The permitting office ensures that new construction is safe and meets code, everything from your neighbor’s second-floor addition to the 80-story towers Hunt Realty has planned near Victory Park. That construction drives the city’s growth, generating property tax revenue that pays for cops and firefighters and librarians and teachers. Given the importance of the permitting process, then, it’s a wonder that it has been a disaster in Dallas for so long.

The permitting operation was already in trouble before the pandemic hit. Then it got worse. In March 2020, when employees were sent home, work basically ground to a halt. The laptops supplied were old and slow, and they were running software called ProjectDox that was poorly understood by staff. (When the software was launched, two years earlier, there had been no major training effort, a problem the Dallas Builders Association had flagged.)

Here are a few of the problems permit applicants have cited: the version of ProjectDox the city was using didn’t allow developers to upload a multipage PDF; they had to do it page by page. Also, the system didn’t notify applicants when something needed to be amended. Similarly, the system wouldn’t tell the city when an applicant had made a requested update, so the process could stall for weeks. 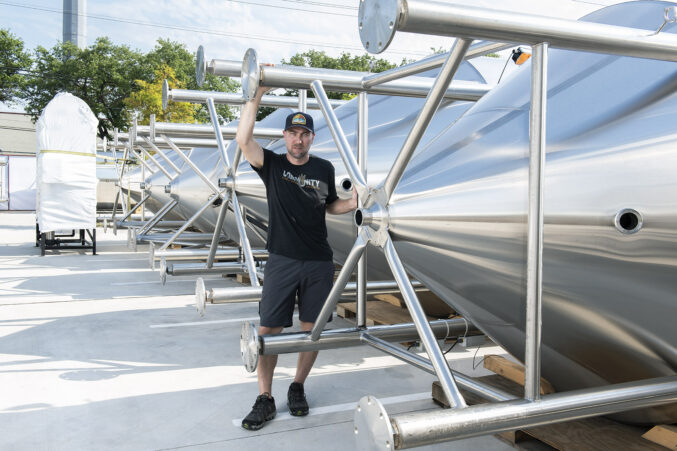 Nerves of Steel: The stress of doing business with the city got so bad that Carr’s doctor ordered brain scans to make sure he wasn’t at risk of stroke.
Elizabeth Lavin

By October of last year, it was taking 16 weeks or longer to get permits that should have taken two or three to process. The city blamed the applicants for not filling out the applications correctly. “Our builders are wandering lost in the wilderness,” says Phil Crone, the president of the Dallas Builders Association. “They don’t know who has the project, where it’s going, why it’s taking so long to get assigned to the two third-party companies the city already uses.”

As a result, work has slowed in the city. According to the Dallas Builders Association, while the number of single-family permits issued in the Dallas-Fort Worth metro area between March 2020 and June 2021 increased 27 percent over the same period two years earlier, in the city of Dallas alone, permits decreased by 14 percent.

According to an analysis by The Real Estate Council, the taxable value of new single-family construction in 2019 totaled $632 million; multifamily and commercial totaled $3.9 billion. A three-month permitting delay in commercial permits, like the one we saw last fall, represents $31 million in lost tax revenue.

Meanwhile, delays are expensive. Carr says his material costs increased by $850,000 due to permitting delays. Construction is about $1.5 million more than it would have been; he had to cut up the project into phases. And he has paid more than $300,000 in additional fees to consultants.

“The more and more expensive development gets, the more you’re chasing away your ultimate customer, and that’s a bad thing for the city of Dallas,” says Linda McMahon, the president and CEO of The Real Estate Council. “This whole thing, if nothing else, is the worst economic development disaster we have.”

I spoke to more than a dozen people for this story, trying to understand how such a critical component of city governance could be allowed to rot. Most wouldn’t talk on the record; they feared retribution from city staff could put their permits in jeopardy. Wanting to avoid a public version of that embarrassment, there were those on the City Council who urged silence. In August, Councilman Tennell Atkins, the southern Dallas representative who chairs the Economic Development Committee, warned his colleagues to be “very, very careful with what we say in public.” Atkins said, “We have to make sure we don’t send a bad message to these companies who want to come to the city of Dallas. We want to market the city of Dallas.”

North Oak Cliff Councilman Chad West, a former plan commissioner who is now mayor pro tem, has taken a different approach. He has publicly made the permitting mess his mountain to climb. He has a matrix of the permitting process taped to a whiteboard in his office. It maps out the various departments and touch points an applicant has to navigate to get approval. He calls it “Chutes and Ladders from hell.”

West became the public face of the frustration mounting within the offices of The Real Estate Council and the Dallas Builders Association. Unlike Atkins, he wanted to document the dysfunction, bring it out into the open, and back staff up against a wall so that they would have to make changes. Last year, his questioning led to changes: the city manager allocated $5 million to pay for private contractors to help alleviate the permitting backlog. West asked for data: average time from permit request filed to permit issued; average time to first review; total number of permits; average time spent with each applicant. None of these measures was being tracked.

Seeing the backlog and feeling pressure from Council, City Manager T.C. Broadnax turned to Dr. Eric Johnson—not to be confused with Mayor Eric Johnson—who was hired in February 2020 to run the department of Economic Development and Neighborhood Services. He drafted an economic development recovery plan that the City Council unanimously approved this past May. Johnson says that fixing the permitting process is foundational to the plan’s success. “Knowing that that support was there, along with the city manager, has really given us rocket fuel,” Johnson says. “Will that support hold forever? Nope. It’s going to be ‘Show us the results to get it done.’ ”

In July, two high-ranking staffers retired, and the employee over the department that handles permits was reassigned to the city’s Aviation Department. That’s a start. Johnson’s plan will further attempt to untangle the organizational knot that has tied up the Oak Cliff Municipal Center. For example, Dallas has more than 1,000 zones called planned development districts, each with its own set of building rules. City staffers are expected to process applications across that patchwork. Johnson wants to create teams that will focus on limited development districts.

Meanwhile, it isn’t even clear whose responsibility it is to pick up the phone when someone calls; getting the right person on the line is a frustration among developers. Johnson plans to change that by creating dedicated customer service teams.

He will also reorganize the departments that handle permits. He wants to combine zoning with planning, two complementary departments that have worked in silos. And he’s establishing annual performance metrics for staff—a first for the city.

Community Beer Co. got permission from the city to begin producing beer in early September, about a year after Carr began filing permits. It happened after this story went to print, but you can get an update on what happened since right here.

Executing these changes will fall to Will Mundinger, whom Johnson has given an unusual title: executive in residence. Mundinger comes highly regarded among commercial real estate types. McMahon voiced her support for Johnson’s plan after months of criticism, partly because of the trust she has in Mundinger. Previously he served as Goldman Sachs’ national director of development, environmental, and construction services. In Dallas, his charge is to stabilize the permitting department before Johnson hires a permanent director. (Mundinger declined to comment for this story; he’d been on the job for a week when this story went to press in late August.)

Councilman West says he respects Mundinger but is concerned how long it will take to right the ship. He says, “Staff has not given me the confidence based on prior efforts in this department that anything they do now … is actually going to get anything done.”

For Community Beer Co., the damage, to some extent, has already been done. The problems getting hashed out at City Hall might cost Carr his business. In late August, he still hadn’t received a temporary certificate of occupancy. He has lost distribution. About half of his furloughed staff have found other jobs, including his chef and head distiller. This large, successful operation is now “forced into startup mode as if we are a brand-new brewery,” he says.

As D Magazine went to press, he was hoping to get permission to start brewing the first week of September, about a year after his nightmare had started. It could be early next year before Community claws its way back onto store shelves and taps. Hopefully by then Carr and his yeast will be back to work. But that isn’t up to him.