Quite frankly, I am writing this story to justify a nasty addiction I recently developed. It killed my productivity at work and drove at least one colleague insane. As with most addictions, I’m not proud of this one, and I suspect there will be many among you who will find it disgusting. If you have a delicate constitution and are easily offended, skip this story. There’s plenty of high-quality, harmless editorial content just a couple of pages away. For the rest of you:

Cyanide & Happiness is a web comic and a show on the VRV streaming service (owned by AT&T’s WarnerMedia) and a series of animated shorts on the YouTube channel of a Richardson company called ExplosmEntertainment. The YouTube shorts. That’s what has me and a bunch of other degenerates hooked. The Explosm channel has more than 10 million subscribers. To put that in perspective, Ninja has about 22 million. At the risk of insulting you, Ninja, aka Tyler Blevins, is an esports player who is way more popular than Mitch McConnell. 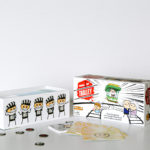 Trial by Trolley is the new party card game from the guys that started Cyanide & Happiness. If you like Cards Against Humanity, then you will dig it. If you don’t, then you won’t.
Natalie Goff

Each weekly Cyanide & Happiness short runs about a minute or so, though some go only 30 seconds. The characters are stick figures with bulbous heads. The animation and humor are crude, but the sound effects and voice acting are first rate. Each short ends with a honking kazoo, which is what drove my work colleague to lose her mind and yell at me and ask me what I was watching.

Shall we break down one Cyanide & Happiness short that I watched because I have a prob—I mean, because I’m a thorough researcher? “Crane Game” is part of a compilation video that has been viewed 55 million times since it was posted to YouTube three years ago. Click play:

A woman pushes a stroller through a bowling alley. She sees a child among plush toys in a claw machine game called Huggy Fluffies and shouts, “My baby!” She plays the game repeatedly, trying to save her child, until she’s down to her last coin. Tension builds. The claw descends toward her child. Smash cut to Mom happily pushing the stroller with a large, mustachioed plush toy pickle in it. After the credits and maddening kazoo honking, we see Mom at home, her green darling in a bassinet. She lifts a pillow, and, as the bassinet shakes, she suffocates the struggling pickle.

To each her own. My wife likes Schitt’s Creek. I can’t get her to watch Archer or Rick and Morty. Is it that she doesn’t like animation? Violence? Sex jokes? Things that are funny?

Another Cyanide & Happiness short, because they’re so short and why not watch another short one? This one is titled “Sad Ending”: a man with a towel around his waist is receiving a massage. The masseuse asks, “Is there anything else I can help you with? Another happy ending?” The man replies, “Let’s try the sad ending this time.” The masseuse steps from behind the massage table, revealing that she is wearing the sort of leg braces a polio survivor might use. She hobbles across the room and lifts a sheet that was hiding an old man, who begins playing plaintive notes on a violin. Then the masseuse dims the lights and turns on a projector that shows silent footage of Hitler saluting his soldiers. The masseuse lifts another sheet, under which sits a small boy in a wheelchair holding a mangy, sad-eyed dog. No, this can’t happen. But it does. The masseuse euthanizes the dog with an injection. The boy sobs. Finally, the masseuse hobbles back across the room, reaches under the towel, and—remember, these are stick figures—gives the man a hand job. Cue the vexatious kazoos. 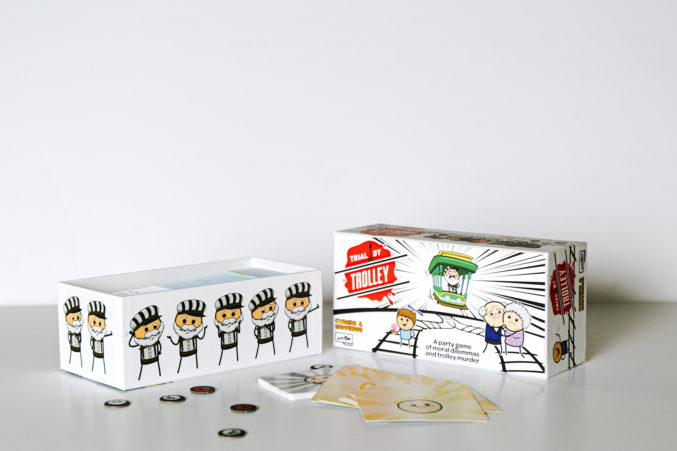 Trial by Trolley is the new party card game from the guys that started Cyanide & Happiness. If you like Cards Against Humanity, then you will dig it. If you don’t, then you won’t.
Natalie Goff

I hated myself so much for laughing at this research that I actually got in my car and drove to Richardson to conduct legit reporting at the Explosm headquarters, where, I was told, co-founder Rob DenBleyker would participate in a journalism-style interview about the company’s new card game, news of which last summer had sent me to YouTube for my first hits of Cyanide & Happiness. Here’s everything you need to know:

Explosm employs 23 people and occupies a spot in a gray office park so drab that describing it as nondescript would amount to purple prose. DenBleyker is 34 years old and superfriendly in a self-deprecating, nerdy way. He wears glasses. He grew up in Houston, met a dude online in Ireland named Dave McElfatrick (!), got into Flash animation of baroque stick figure deaths, hooked up with another similarly stick-figure-death-obsessed kid from Wyoming named Kris Wilson, traveled north to attend college at UTD, met a woman named Heather who would not only become his wife but also switch her major from chemistry to accounting when she saw that this stick figure animation thing might make money and need an accountant, helped get 150,000 signatures on a petition to allow McElfatrick to immigrate from Ireland to Plano (!!), and then sat down with me in his office to talk about Trial by Trolley, the party card game that hit Amazon in February and rolls out in Target stores this month. Explosm and its partner, Skybound Entertainment, launched a Kickstarter campaign for the game with an arbitrary goal of $69,420. They wound up raising $3.5 million.

“It’s all about the trolley problem,” DenBleyker told me. “If you’re in a trolley and the track splits, and you can go one direction and kill five people or pull a lever and kill just one, which do you choose? Except we take it to the extreme. So if you have a kiddie pool full of babies on the right and, like, a bag full of kittens on the left, which way do you go? That was the basic premise that Skybound had, like Cards Against Humanity, where you have to impress the judge, only this isn’t anonymous. For us, it was an instant yes. We said, That sounds like something we could make really fucked up and weird.”

That is a quote. Obtained by a journalist. Using a voice recorder. You should buy this game and play it, because I played it with my insane work colleague, and we both enjoyed it. (Bear in mind, though, that she is insane.)

OK, so before I leave you with a breakdown of one more short, you should know that Explosm is already working on several other card games and a video game, too, in addition to projects that DenBleyker wouldn’t disclose. Stay tuned. Would you like to try some Cyanide & Happiness?

Have a hit of “The Man Who Could Sit Anywhere”: our hero visits a furniture store called Sweet Seats and, after trying many chairs, each of which he enjoys, declares, “I have the most comfortable ass in the world!” He proceeds to test the hypothesis, sitting in the lap of the Lincoln Memorial, atop the Eiffel Tower, on the head of a swami who is sitting on a bed of nails, and even on an airplane. Each perch suits him perfectly. But then he learns he has ass cancer! Turns out, he also sat on a barrel of nuclear waste. Insane kazoos. Credits. The proprietor of Sweet Seats gets a delivery in a large crate. It is a chair whose cushion is made from the butt cheeks of the man who once had the most comfortable ass in the world.