Here comes Avner Samuel, back after two and a half years in Israel, returning to a Dallas dining scene he treats as though it has never changed—and never will. Nosh Bistro is the latest restaurant from the prolific chef, his 21st, this one in Preston Hollow, with shiny cars in the valet lot off Northwest Highway. It’s a new beginning but not exactly a fresh start. And like all his ventures, it’s an extension of himself.

The Israeli-born Samuel has cooked in restaurants in Jerusalem and Tel Aviv (where he jetted off to in 2016) and trained in cooking schools whose names—La Varenne, Lenôtre, Ducasse—give away his allegiance to a cohort enamored of the French sensibility of nouvelle cuisine. He was a young executive chef at The Mansion on Turtle Creek in the early ’80s, a time when the new American cuisine was being defined, and to hear him tell it, he is responsible for the gelling of Southwest cuisine’s “Gang of Five” (including Dean Fearing and Stephan Pyles), who gathered in his house on Webb Chapel Road. He went on to open and close a string of his own ventures, including Bistro A (1998), the lauded Aurora (2003–2010), and more casual Nosh (2010–2015).

The menu at Nosh Bistro, stuck in a 1980s time warp, has a dated ahi tuna tower, and the adjective pile-up of its menu-item descriptions is straight out of that era, too. We might as well be back at his first restaurant after leaving The Mansion.

Samuel’s background is something that the servers can seem to forget. On my first visit, our server launched in with recommendations for hamachi crudo that had nothing to do with my request to try the menu’s Middle Eastern-influenced items, gathered in a beautiful mezze platter: black-chickpea hummus; Samuel’s falafel, the centers compact and glowing green, like the brightest pistachios; cold roasted eggplant that is melting and decadent; Persian pickles; and dolma. It’s a vegetarian feast served with pita. 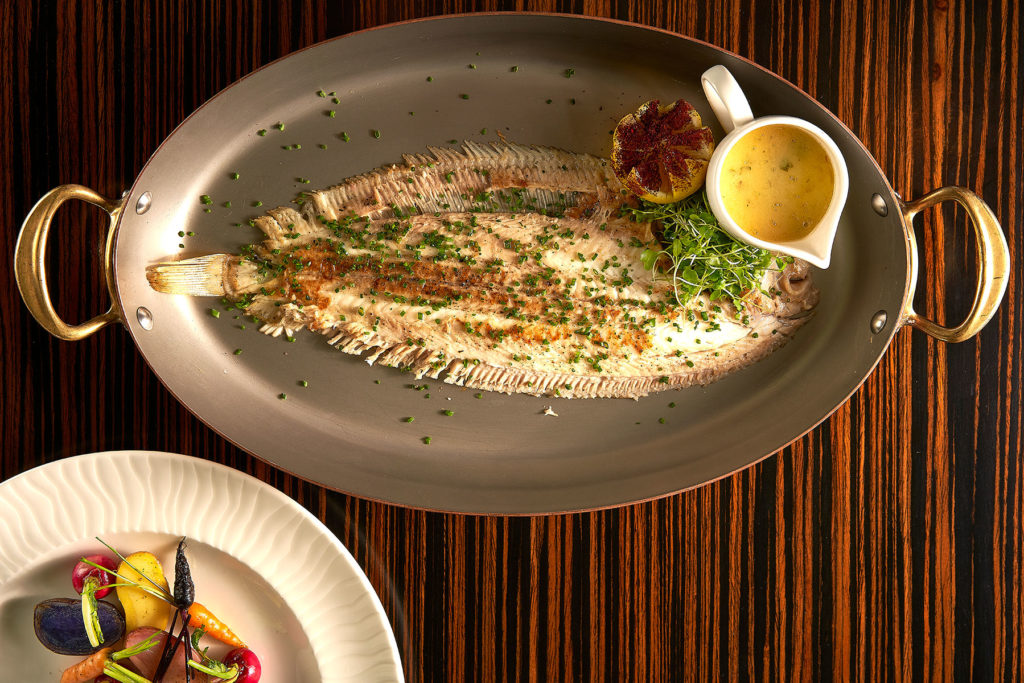 The Past is Not Past: Whole Dover sole is fileted tableside. With its petite vegetables and beurre blanc sauce, it’s pure French nouvelle cuisine.
Kevin Marple

Dover sole is skillfully fileted tableside, with crisp vegetables and a rich lemon beurre blanc. So classic. Lift those morsels of delicate, tender white flesh and you’re taken back in time to when continental fine dining set the standard. I savor scallops with foam and olives, even though the foam is cliché. I can see how this can be satisfying.

The best thing by far in all my visits is a dish of soft-scrambled eggs, clouds coaxed together with shaved white truffle petals and a pool of goat butter that adds an umami boost, nudging it over the top. And if I could have stayed with that, it would have been true luxury.

But instead, they want to impose their version of luxury, which means pricey proteins: Chateaubriand for two, the tomahawk chop (our server makes a chopping motion), a wagyu rib-eye, foie gras. And that whole Dover sole, of course. The modus operandi is full of bravado.

That first night, Samuel himself presides over the highly pedigreed Jamón Ibérico de Bellota, shaving slices from the whole leg. “It tastes like figs and has that sweetness that none other has,” our server says, waxing lyrical. But the slices come fanned over the surface of a ceramic dome that is, supposedly, warmed from within by a candle. Except that it isn’t. The candle is lit at the last minute; the plate is cold; and the slices, thick as shingles, have the right flavor but none of the suppleness that is the ham’s pleasure. Better to bend it to the heat of your fingers.

There are orbs on the menu. In the beet salad, the flesh of a crisp green apple bringing tartness. In the leaden sumac doughnuts with Pop Rocks (why?). And, in what is clearly a coup de grâce, the rock-hard, unforgiving spheres of the Chalice of Knickerbocker Glory, a dessert whose name seems all the more absurd when you hear that they are scoops of ice cream churned by Paciugo in innumerable flavors, with a pipette of Grand Marnier that did absolutely nothing I could detect, and a pane of sugar glass in lurid sunset colors—saccharine, empty candy.

Servers wheel around the cumbersome Champagne cart, but fail to fold your napkin when you excuse yourself to the restroom. One server backed into our chairs, jarring us, while waiting on a table behind us. They can give the impression of being in Sleeping Beauty’s enchanted castle, newly awake from a long, long sleep. 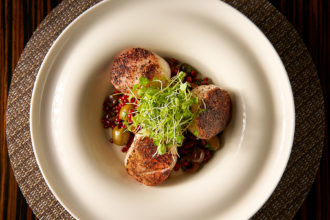 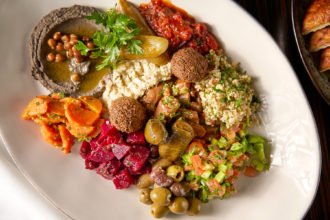 I inched closer each visit. I’d started in the purgatory of the hallway, where Samuel’s only presence is his name inscribed in a psychedelic ’60s-inspired Peter Max-style mural, along with a floating toaster. Then I dined in the main dining room; and then the chef’s tasting counter, eight seats offered under the open kitchen’s decorative stars and dazzling copper pots, like some kind of celestial countertop.

At my final stop, I ate nine courses composed on the principle of gilding the lily, each more opulent than the last.

They started with a surreal spoonful of Osetra caviar over gold leaf over tomato-water gelée in a clear vessel set over a light that changed colors. The tomato flavor was shimmering, but it all sent a Technicolor rainbow shining into my eyes. Then layers of raw scallop, tucking in Osetra caviar and ringed with salmon roe—carelessly paired with a Chardonnay that made me grimace and want to spit out the bite, the chemistry turning the mouthful fishy and bitter, almost like an artichoke would. There was a diver scallop as big as my fist wrapped in a filet of Dover sole served over pommes purée that was more butter and cream than potatoes, from a recipe, Samuel told me, of Joël Robuchon. More caviar. More white truffles. A nonsensical progression whose only discernible narrative arc was bling.

It makes for a memorable evening. I can’t remember the last time I had so many highfalutin proteins or ate what felt like my weight in snowfalls of white truffles. But it’s excess without finesse. I felt like it was about the circus and fanfare.

Yes, the brunch sounds nice, with puffs of rose-water-scented mascarpone on the buttermilk pancakes. At the end of one visit, our server told us about it, with its three courses and Champagne cart. “It’s the good stuff,” he said. Did he even need to mention that?