Jessi Porter founded Balloon Therapy last year after an extravagant balloon creation on Pinterest inspired her to construct her first installation for her mom’s birthday. The celebratory design was a blend of blue balloons and palm leaves dramatically draped around a room. It was a success but not without casualties.

“I bought chicken wire to put it in my parents’ living room and destroyed their wall,” Porter says. “I hand-tied each balloon separately and then hot glued them together, so I had third-degree burns on my hands. But it looked really cool in the end, and I took a picture and put it on Instagram.”

After someone at Bumble spotted her handiwork and hired her to create several installations for an event, the company took off. In May, Porter left her day job as a high school counselor to focus full time on the business. Now Porter and her fiancé, Chris Brown, work diligently in their Oak Lawn office, watching Netflix, tying balloons, and using the company van for delivery of their creations, which start at $150 for 10 feet. 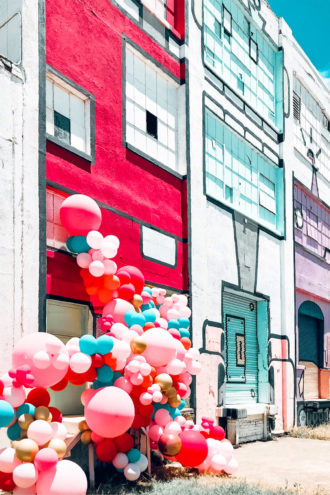 “People get on Instagram to be inspired,” Porter says. “It can get mundane. So we are trying to spice it up and also trying to keep it fun. Instagram is how I built the entire business.”

Like Porter, Jill Berger built her party supply brand, Lushra, on social media. Berger, who moved to Dallas after college, is opening a Lushra storefront in Expo Park this month. She recently completed an 8,000-piece balloon installation at the Trammell Crow Center, and now she wants to empower people to create their own art with DIY balloon garland kits. Each one contains enough balloons to make a 12-foot garland, and at $45, compared to the minimum $300 cost for Lushra’s basic installation, it’s a bargain.

“I think there are just so many ways to incorporate balloons,” Berger says. “It’s very simple. If you have an ounce of creativity, you can do it.”

In addition to parties and events, both women have noticed a growing balloon trend in the wedding industry. Brides are opting to use balloons in lieu of flowers, largely due to the lower cost. In response, balloon manufacturers are introducing a broader palette of modern colors, expanding the range of events that designers like Porter and Berger can bring to life.

“Before anyone really started here, you could go to Party City or Kroger and hope they could blow up your balloons,” Porter says. “Now there are so many options. I can figure out something no matter what the theme is. The bigger we can get, the more affordable we can make it, too. I don’t want people to have to buy a personal party planner to do something really cool at their kid’s party.”

The One Story You Should Read About Barrett Brown, Ctd.