Enjoy unlimited access to all of our incredible journalism, in print and digital.
Subscribe Now
Advertisement
Shopping & Fashion

The showroom at La Vie Style House is buzzing with energy. Co-founder Jamie Coulter is trying on a new design, trading quips and laughs with her partner, Lindsey McClain. As boxes of new kimonos and caftans covered in sequins, 3D lace, leopard print, and brocade are unpacked, Coulter squeals in delight at the sight of a glittery garment. “It’s so Gucci.”

It’s clear within moments of walking into their headquarters on Travis Street that the women are equal parts business partners and friends. When we sit down, Coulter apologizes for her athleisure as she munches on a granola bar. “So sorry, we just got back from Pilates,” she says. And that’s where the story begins.

The two met at Bodybar Fitness in 2013. Coulter had just moved from Los Angeles, where she was a stylist and co-founder of the colorful accessories line Ban.do. McClain, a Dallas native and personal shopper, was mourning the death of her first husband. After bonding over their mutual restlessness and desire to create, they launched La Vie as a styling studio in 2015. 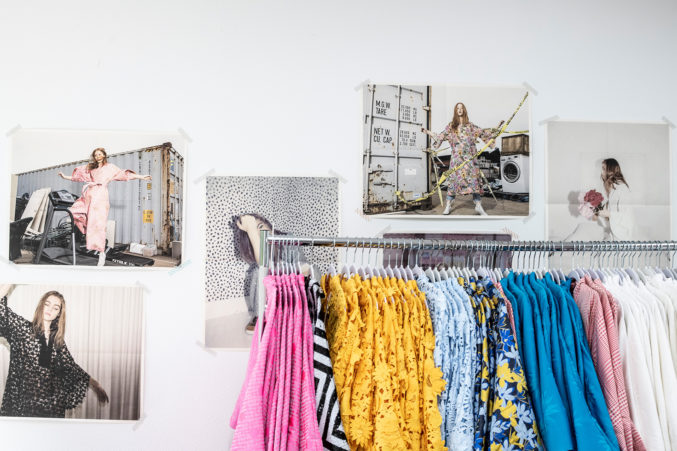 Coulter often wore an array of breezy vintage dresses to work, none of which McClain could successfully convince her to part with. “There were a few I really wanted, and she just couldn’t let go, so we decided to make them,” McClain says. They spent the next year sourcing fabrics and working on the fit of the dress. They never intended for the side project to grow into the main business.

They settled on a one-size-fits-all design in colorful, vintage patterns. Friends began asking where to buy them, so they agreed to host a trunk show. “We thought it would be our moms, our moms’ friends, and a few of our friends,” Coulter says. Thanks to some grassroots marketing on Instagram, more than 150 shoppers showed up.

Cut to March 2017. Dallas interior designer Amy Berry wore a floral embroidered La Vie caftan to a party in the Hamptons and caught the attention of Marina Larroude, then fashion director of Barneys. “We thought it was a joke,” Coulter says. “She direct messaged us on Instagram. But it was legit.” They’ve since created multiple collections for the department store and captured the attention of actress January Jones, influencer Blair Eadie, and skin care guru to the stars Joanna Czech.

The buzz hasn’t stopped. La Vie showed for the first time at New York Fashion Week last month; it’s launching a collection with Natalie Bloomingdale of fashion website The SIL and home design gallery The Future Perfect this month; and will soon roll out new fits and styles, including a men’s kimono.

But La Vie customers can still count on a delicate mix of Dallas glam and California-cool silhouettes that can be dressed up or down. “It’s not like we reinvented the wheel,” Coulter says. “We’re just kind of doing it our way.”

Get the insider's guide to the best in Dallas style, beauty, and wellness delivered right to your inbox each month.
Jamie Coulter La Vie Style House Lindsey McClain

Who says a baby shower has to be a drag?
By Joslyn Taylor
D Magazine Directories